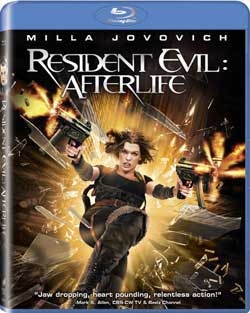 Our heroine Alice, heads to Alaska to find safe refuge but only finds an old friend & is stripped of her powers by Wesker. She returns to LA to find the city overrun by Zombies & meets some new allies & a couple of old enemies in the interim..

Let the Black Saint state this first & foremost before I continue to regale you with my opinion of this movie. I am not a fan of the “Resident Evil” franchise. I thought the first one was ok, the 2nd one:blah & I wasn’t crazy about the 3rd one either but I did think it ended intriguingly….So I went into this one wondering how they were going to pick up where the last one left off.. 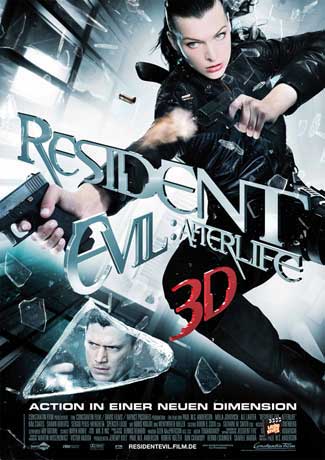 Director Paul Anderson must’ve thought a little about it too because the opening sequence kicks ass! After a really cool credit sequence (In great 3D I might add). Alice (Milla Jovovich) is making an attack on Umbrella’s underground fortress looking to destroy it & Wesker (Shawn Roberts at his sleaziest). But this time as indicated at the end of the 3rd installment, she isn’t alone. She has a whole army of Alice’s with her. All with her capabilities & all of them lethal. The attack sequence on Umbrella’s fortress in the beginning of the film is well choreographed, full of bullets & blood & more than a few chuckles. All in the best 3D I’ve seen since “Avatar”. It’s that good.

Unfortunately for Alice, just when she thinks she has Wesker he pulls a rabbit out of his hat or should I say a syringe out of his pocket & manages to stick it in her neck. He then informs her that he has just injected her with a virus that will kill off all of the special “abilities” our sweet Alice possessed. As he’s posed to kill her he asks if she has “Any Last Words”? & she thanks him for making her “Human again”. It’s a well played scene & I felt a genuine pathos towards Alice at this point. Something I hadn’t felt in the previous 3 installments. I was duly impressed. 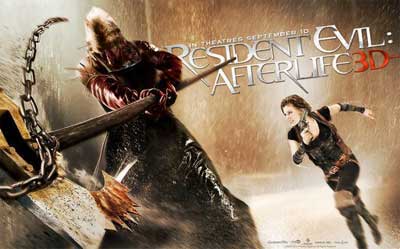 Luckily for Alice Wesker doesn’t kill her & we skip forward to 6 months later & she’s piloting a plane to Alaska looking for a reported “Sanctuary” that isn’t there but she does find Claire Redfield (Ali Larter) who attacks her. Now Alice might not have her “powers” anymore but she can still kick a whole lot of ass & in putting Claire (Who doesn’t recognize her) down, she finds a Spider shaped ornament attached to her chest. It apparently made Claire something of an amnesiac who starts to regain some of her memory after it’s released from her chest.

But where are all of the others Claire escaped with at the end of the 3rd installment? You’ll soon find out (I’m not gonna tell you)! Together the both of them fly back to LA (where is she getting all of this fuel)? Only to find it overrun by zombies. There is a great overhead shot of the infected trying to get into the only safe place available (A Prison) where it seems like there are thousands of them surrounding the facility trying to get in. After a very exciting landing on the roof of the prison, they meet a few more survivors & one who is locked in a cell. Why him? Hmmm. 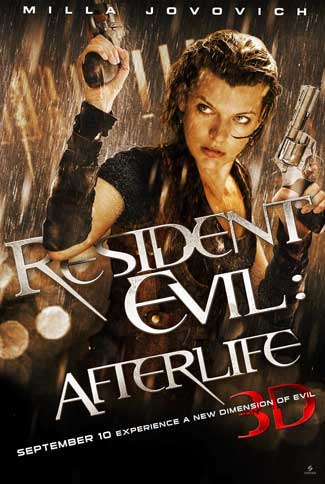 It’s at this point that the “Axe man” enters the picture. Bursting through the horde of zombies with an Axe/Hammer about 6 feet long & he’s about 10 feet tall his damn self. And when he starts banging on the gate with that Axe/Hammer to get in, He’s gonna get in & bring thousands of infected with him. Sounds like……Trouble!!

I’m not going to get much deeper into the plot than I already have only to say that all of the actors were excellent in their roles. There are a few more surprises in store for you (stay through the end credits) & it is one hell of an action/horror movie. I’m not a fan of Paul Anderson’s work overall but I gotta admit he pulled out all the stops for this one. It is a roller coaster ride of action & horror that makes you keep your eyes on the screen. And as to the 3D effects….EXCELLENT!! Stuff gets thrown at the screen and you’ll want to duck on more than one occasion for sure.

As I said earlier I’m wasn’t a fan of the “Resident Evil” series overall & to be fair, one movie isn’t going to change my mind that much. But there’s another cliffhanger ending in this one & now I WANT to see the next entry in the series. These movies are making money if they’re still making them & it’s a rare occasion when the fourth installment of a series is the best one but “Afterlife” is the best of the “Resident Evil” films so far & you have to give the filmmakers credit for that. 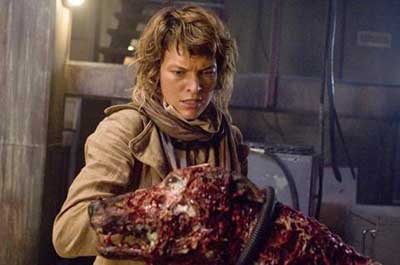 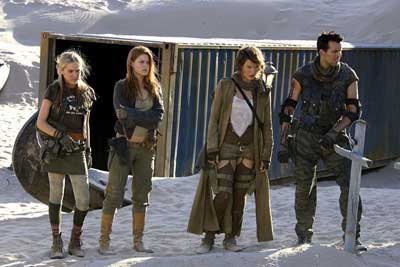 And by the way..the soundtrack for this movie was really interesting & different. It was a pulse-pounding assault on my old mangled ears. I just forgot the name of the band that did the music for the film. Damn me!! I’ll find out & let you guys know. But quite honestly, all of you should know who they are by Monday morning cuz’ you’re gonna want to see this bad boy this weekend for sure. 4 Shrouds out of 5 from The Black Saint (Remember I wasn’t crazy)