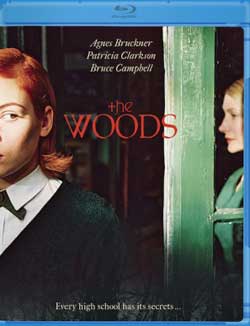 Set in 1965 New England, a troubled girl encounters mysterious happenings in the woods surrounding an isolated girls school that she was sent to by her estranged parents.

I’m a bit of a Lucky McKee aficionado. I consider his “May” to be one of the greatest and most underappreciated horror flicks of this new millennium. Its companion piece “Roman” was an interesting and worthwhile effort. “The Woman” was also an excellent horror film, not just a shocking fright piece but also with something to say about misogyny. His “Masters of Horror” piece “Sick Girl” was one of the best of the entire series. I’ve yet to see “All Cheerleaders Die” or his segment from “Tales from Halloween”, but guaranteed I’ll find something to praise in them. I have to admit I’m a little biased.

I first saw The Woods on its DVD release in about 2007. “The Woman” hadn’t yet been released and I hadn’t yet seen “Roman”, but my impressions of “May” and “Sick Girl” had cemented my opinion of McKee as one to watch. My initial reaction was one of disappointment. I didn’t dislike the film, but I wrote it off as average and had no desire to ever see it again. I accounted for this by telling myself McKee was probably at his best when penning his own work (David Ross provided the screenplay).

That still stands true upon second viewing, but afterwards I have to say that I was glad to see this film again. I appreciated it a lot more this time. In fact, seeing McKee direct someone else’s screenplay only proves what a talent he is, and strengthens my opinion on him. McKee is a craftsman. The world needs more of his films.

“The Woods” begins with “wayward youth” Heather (Agnes Brucker) arriving at the prestigious Falburn Academy. Heather is rebellious and troublesome and it is hoped that the Academy might mould her into a more respectable young lady. She is introduced to headmistress Miss Traverse (Patricia Clarkson) a rigidly cool woman, who informs her that Falburn is not a school for wayward girls and that insubordination will not be tolerated. Also stalking the halls is the stern and twitching spectre Mrs. Mackinaw (Marcia Bennet), who wastes no time in belittling Heather in an outburst of offended rage.

Heather is befriended by fellow classmate, Macy, and receives the ire of school bully, Samantha, who labels her with the charming epithet “firecrotch”. Heather’s stay at Falburn will be anything but easy.

At night, Heather dreams of a shrieking girl dripping with blood. During the day, the woods around the academy seem to whisper to her…

It becomes apparent that Falburn is no normal school and that beneath its façade lurks something sinister. The other girls whisper stories of the school’s long history. Miss Traverse seems to take a special interest in Heather. It seems Heather is “gifted”. She passes her scholarship test not through knowledge but by seemingly channelling some force or power. The more she learns about the academy, the more it seems her dreams may be more than dreams, the whispers more than just whispers.

“The Woods” is an effective little chiller. Shot in sepia like tones it bears an insidiously creepy quality. McKee wrings a very heady atmosphere from the windy, whispering branches of the brooding woods. The performers do their part too. Bruckner as Heather creates a compelling heroine, dogged yet vulnerable. Her tenacity and refusal to succumb to authority makes her extremely likeable, but these same qualities also mark her as a target. Clarkson and Bennet also deliver fine performances, grim foil for Heather’s prying ways. We have all had awful teachers before, but were any ever so outwardly sinister as these pair? Bruce Campbell is along for the ride as Heather’s father. In a few short scenes and with little dialogue we get an excellent sense of their warm relationship that further endears Heather to us.

The premise is decidedly rather Argento-ish. There are shades of Suspiria and Phenomena. The visuals here, while not without style (there is style aplenty) are nowhere near as gaudy or bombastic as Argento’s, but the screenplay is more solid than either of those two works. I appreciated some of the finer nuances also. Note how the school seems to use recycled paper.

Overall it’s not a great film, but a very solid and worthwhile work. Dripping with suggestion, it is a great looking and well acted piece with characters who engage far more than usual in genre fare. McKee, like contemporary Ti West, has the air of a craftsman. It is a minor work for him, but I’d take a minor work from such a talent over much of the dreck that sees release these days. He has a real gift for the genre. We haven’t had nearly enough of him.

The Woods is now available on bluray per Olive films