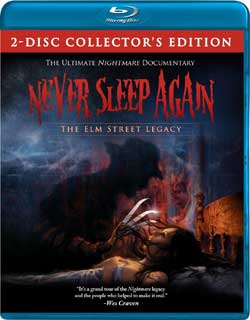 As Freddy Krueger is reborn for a new generation, it’s time to return to where it all began. Join star Heather Langenkamp for a rare journey down Elm Street, with film clips, rare photos, storyboards, and more treasures from the entire series. Cast and crew discuss their deepest nightmares, making the series and its impact on pop culture. Among the interviewees is Wes Craven himself, who reveals his inspiration for Freddy and the original film.

There’s probably not enough I can say about this fantastic Nightmare on elm street series “Never sleep again” overview. The documentary set that “should” have been made long ago, turns up right in the cusp of the franchise being re-invented again. Whether that fact is a plus or minus, it certainly has awakened the Freddy in all of us. It’s a few generation of fans who have grown up with and experienced the Freddy years first hand regardless of what Hollywood decides to do with the franchise. 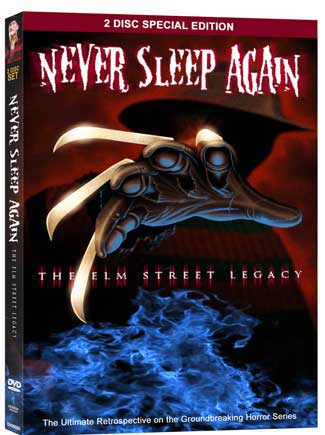 First off you’ll notice that this incredible 2 disk DVD set spans over 8 hours of material. A huge undertaking for any film maker project. Secondly, the crew has managed to round up a fantastically rich selection of previous Nightmare on elm Street celebrities. No Johnny Depp wasn’t included, though we of course can figure with his busy schedule its hard to get him to do these things without agents wanting a huge cut. Though no worries as his parts are still included.

Heather Langenkamp embraces this collection with open arms providing no only great interview content, but as a host and major contributor to the set. Strangely enough its great to see all these actors years later …in how they have changed and what some of them have gone on to do later. Wes Craven and Bob Shaye are included and on hand to really give a great insightfully rich background of Nightmare lore and moments. In fact it’s safe to say, there is alot I learned from this that I never had knowledge of or would have considered. A hilarious moment for me was finally realizing that the 2nd film of the series had a huge gay overtone that I previously never really considered. The focus on that and the shots they include even cements that notion in a equally hilarious ways.

Historians of the Freddy days will delight over the back story of the introduction years when Newline was just trying to make a name for itself. A chance, wing and a prayer invested in a film that every other studio shunned which blossomed into an iconic part of horror’s history. We meet Wes, the other directors who contributed, the Fx wizards who were responsible for many of the cool effects and the key production team folks who had a few cameo roles themselves. We learn about endings that almost never happened and issues with script content that was constantly scrutinized by the powers that be. Robert Englund provides really intelligent perspectives on Freddy and the inclinations of the films directions. 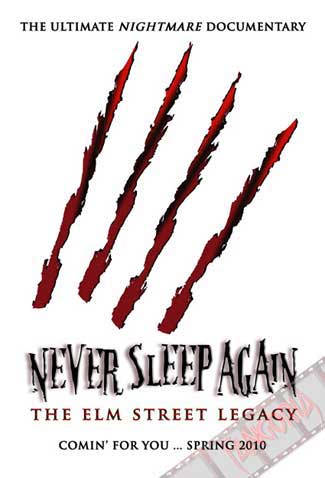 The DVD itself is well constructed and features great wraparound material contributions that include custom title sequences and stop motion animations. For those who think this “just” a collection of rehashed series moments, it really is much more than that!

Can you make it thru 8 hours of Freddy documentaries? Hell yes, the production is done so well that each and every moment provides a compelling look at this films legacy and its behind the scenes shots history. The rotating room, the gags, the puppets, the props, the makeup, the special FX…..the list goes on. If this wasn’t enough the 2nd disk has some equally great inclusions. An interview and perspective with the original films poster artist, a hallowed grounds horror tour of the original set and its locations, and a really funny sneak peek at Heather Langenkamps new documentary about her character Nancy’s hunt for recognition within the Nightmare Franchise. The fans, the looks and the production is featured in full overview style with a gaggle of smaller but important documentaries on this 2nd DVD. I’m a sucker for set locations, so that little piece was a huge plus for me! 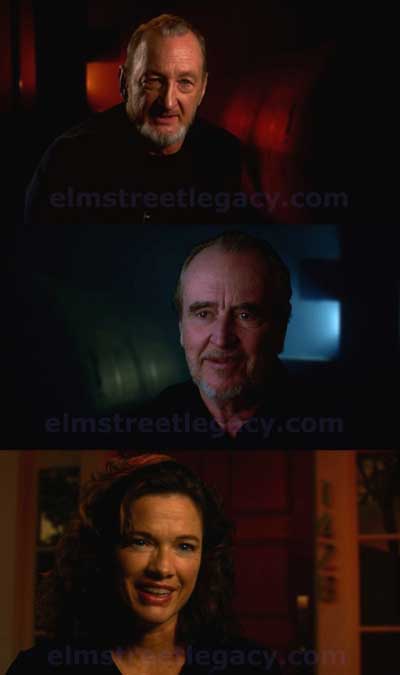 In summary, this is one Nightmare on elm Street documentary that no horror fan should be without. If you love the series, your gonna love this with open arms. The best Freddy series documentary and best to date for that matter!