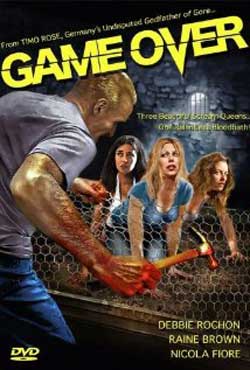 Tina, a young actress who left the States for Germany-she fell in love, so she left for a man. Two good friends of hers come over to visit Tina for her birthday-but the next 24 hours will be very brutal, as the three are kidnapped by an sadistic maniac. He plays brutal and primitive games with them, and every attempt they make to escape leads them deeper into hell!

Timo Rose is a busy man. Not only does he wear many hats for each of his movies (often including that of actor, producer, writer, director, and many of the behind the scenes roles as well), but he doesn’t seem to take breaks between his movies. In 2009 alone he directed three films: Unrated: The Movie (co-directed with German splatter legend Andreas Schnaas), Timo Rose’s Beast, and the movie we’re going to be talking about today, Game Over.

The movie starts off in a whirlwind, with a “Based On True Events” tag thrown at us just before a barrage of blood and gore underneath the opening credits. But then it calms down, at least momentarily, and we meet the one and only Debbie Rochon as Tina, an American actress who has moved to Germany (Debbie is also known as one of the hardest working actresses in the genre, appearing in close to 250 movies to date). Soon after, we meet her friends Melody (Raine Brown) and Eala (Nicola Fiore) who have paid her a surprise visit. They party hard, then wake up and make fun of famous actors over coffee (which is actually a cooler scene than you might think, feels like Roses’s commentary about the little guy versus big Hollywood), and then they go for a walk and get kidnapped at gunpoint by a maniac and taken back to his place.

From here on out, things become far more Hostel than Sex and the City (trivia: it was that show in which Raine Brown made her acting debut), and our three protagonists, as well as some other unfortunate people, get tortured and brutalized by Tim (Sam E. Terry) and his wife Sasha (Magdalena Kalley). Why? Who needs a reason? But here’s a fair warning to you, the potential viewer: things will be pretty rough from here on out.

We should be happy that the gore effects in Game Over are so good, because we are treated to quite a bit of the red stuff throughout, from opening credits all the way to the final scene. You’ve got mouths torn apart, testicles destroyed by hammers, breasts ripped off with hooks; if it’s a body part, chances are it is beaten, bloodied, or otherwise mangled at some point in this movie. Melody is raped multiple times, Eala has a finger broken and is forced to suffocate a girl and then smash her head with a hammer. And then it starts getting crazy. Tim’s mother (played by Manoush, a familiar face for fans of German horror) appears and breastfeeds him while Sasha watches. Tina begins talking like Tim is the –ex she had once been abused by. And Melody becomes convinced that the whole thing is just a movie, which is just crazy…or is it?

It’d be one thing if this movie was just a bunch of nasty gore scenes, one after another. We’ve seen that movie over and over, and often the plot becomes secondary to how bloody each kill is. And just as often, those movies fade into the ether that is our hazy memory of boring movies. Fortunately, Game Over is more than just blood and guts. While the story isn’t multi-layered or one of a kind, it’s far superior to the typical “torture P*rn” plot. But what stands out here is the acting. All of the “bad guys” are creepy and quirky and make us uncomfortable, with special mention for an especially sadistic Sasha. Even better are Rochon, Brown, and Fiore, all of them both believable and endearing. They make us feel bad that bad things are happening to them. We don’t need to root for the killer in this one. 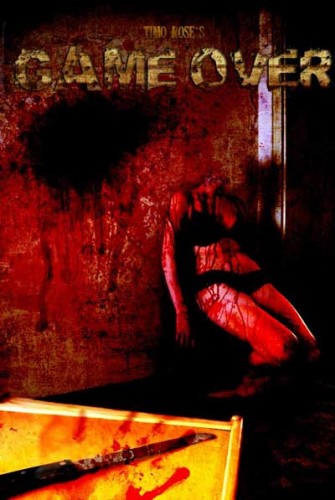 I’ve seen quite a few Timo Rose films in my day. Often they are very interesting stories with good gore and decent acting, but too much crammed into too short a runtime. Not so with Game Over, my favorite of his so far. You’ve got a full story placed within the confines of the single movie, complete with protagonists you care about, maniacs that make your skin crawl, and enough bloody violence to keep even the last attentive horror fan entertained. This one’s a keeper in my book.