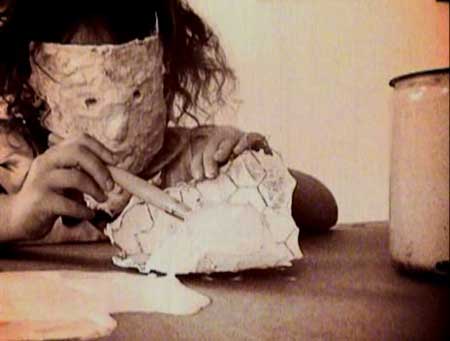 A disturbing observance of Lindsey, a child existing in an indistinguishable time and place, haunted by surrealist visions.

Dislandia is a short film (just about 30 minutes long) written and directed by artist Brian M. Viveros. It can be found in the Cult Epics “Cinema of Death” collection alongside short films by Nico B., Bogdan Borkowski, and Olivier Smolders. It can also be found, along with Viveros’ other short films and a gallery of his artwork, at www.brianmviveros.com.

It’s often hard to put into words what an art film, or a surreal work of any kind, is technically about. And more often than not, trying to explain what it is about just takes away from the “art” itself. Dislandia is summarized as a little girl named Lindsey, who exists in an unknown time and place, being haunted by surrealist visions. Sure, we can go with that. In fact, most of the short film does show a little girl wearing a very creepy mask wandering around uncertain settings. There is no dialogue, there is no climax or resolution, but then again, that is not the point here. 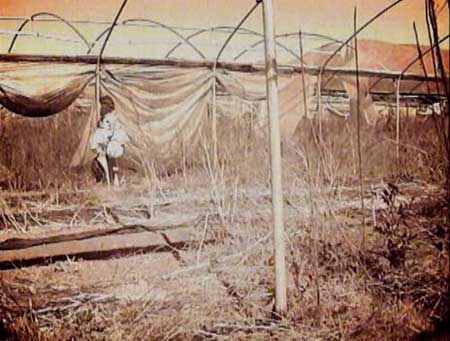 What Dislandia does very well is set an eerie tone and then continue that tone with unsettling visuals. It is not horrifying, nor is it gory or violent. But it is interesting, and maybe somewhat confusing. It is shot in black and white with sepia tones, giving it an “old” look and making it feel like we are watching a psychologist’s home video of his patient. At times it brings to mind Merhige’s Begotten, at other times it’s more like the VHS tape from The Ring. Add in the soundtrack, a mix of strings and music box sounds and radio static, and we’re right back to that unsettled feeling. 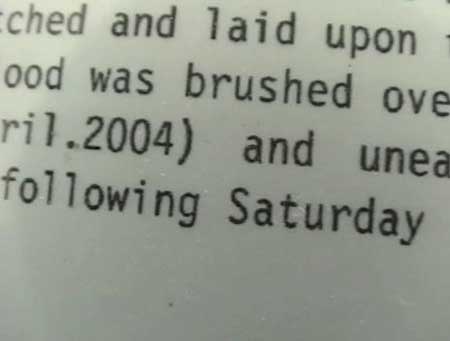 I like a lot of what this film does. It doesn’t give answers, but I feel like it gives us just enough to enjoy while also providing little hints along the way. Is there a correlation between the little girl’s leg, which seems to have some sort of brace on it, and the sewn up hoof (I think that’s what it is) we see being tethered together by disembodied male hands? Maybe. But it doesn’t take anything away from our experience to not know for sure. We can enjoy the juxtaposition of images on the screen for what they are, much like we can recall and write down the fleeting, disjointed memories of a nightmare we once had. It might seem like a jumble of nonsense when put down on paper, but in our heads, it feels real, like an experience we’ve made it through. Same with Dislandia. 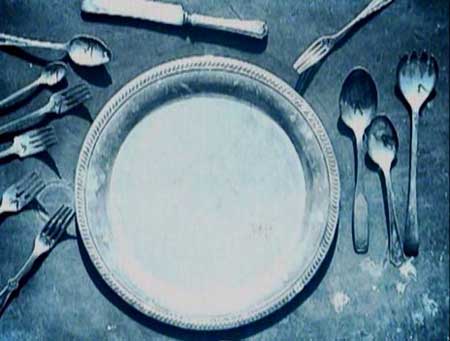 The one thing I wish had been done differently in this film is the intro. After a blurry series of dials and gauges flash across the screen, we are introduced to a story about “The Lindsey Face.” It goes into detail about a mask, which we see later, and what is done to create that mask. After this, the camera pans around a layout of drawings, presumably done by Lindsey. It is a style choice, the way this is all shown, but I wish it had been shown differently. The camera literally pans left to right across the page detailing the story, coming back across and down a line just as one would read words on a page. Then the camera circles around the drawings, much like the way a dad might record his child’s artwork in his home movies. I understand the point, at least I think I do, but this was a mild irritant to me. 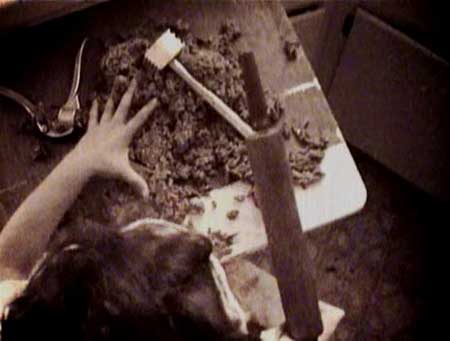 Dislandia is not a horror movie, nor is it a straight forward, plot-based story, so keep this in mind before viewing the short film. It is interesting, and it sticks with you. I’d recommend it for fans of the work of David Lynch, specifically Eraserhead and his short films, as well as anyone who enjoys surreal art. If that’s not your thing, there’s really no reason to take a look here. It’s good, but it is also a case where the saying “it’s not for everyone” does apply.