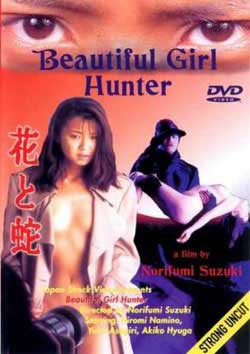 (aka Star of David: Beauty Hunting)

Every movie begins with the potential that you may be getting into something worthwhile, rewarding, or totally off the wall and crazy. Even if it is a micro budget shot on video fan film, shot on 8 mm, or with a a HD camcorder. On the other side of that token is that you could be stepping into a big old steaming pile of dogsh*t and something so boring it feels like three hours of watching paint dry and puts you to sleep! But I guess with a title like BEUTIFUL GIRL HUNTER, you do get a idea of what you are getting into but actually even though you might think you know, you really don’t! It does go by the alternate title of STAR OF DAVID: Beautiful Girl Hunter but BEUTIFUL GIRL HUNTER is fine and it is a apt description of what the movie is about but when I put it on I thought the film itself had a rather unassuming look to it. Made in 1979 it looks like it could be a Godzilla movie or maybe a yakuza gangster pic.

It’s Very clear, bright, and crisp looking and gives no indication of the levels of sleaze to come! And it comes rather quickly. A man, who is more of a beast, is attacking a woman in her bed, sexually assaulting her while her husband is tied up on the floor watching it all happen. This is hard to watch because right away you identify with the husband and put yourself in his position and think about how you would deal with this horrific situation.

But when you see how he deals with the aftermath of this violation you will no longer identify with him! It turns out that he blames his wife for getting raped! I guess some time passes and he has her tied up and is whipping her, whipping her breasts and her stomach and she begs him not to whip her stomach because she is pregnant. And her husband knows it is not his and that the baby in her belly belongs to the rapist and this sends him into even more of a rage. The abuse goes on and on to the point where the husband is having sex with other women in front of his naked and tied up wife. You can see the betrayal, helplessness, and loss on the face of the wife for the way her husband treats her for what happened to her and I did sympathize with her but she looked really hot and sexy all naked and trussed up! eventually she does give birth to the child, a boy, and the husband hates the kid because it belongs to the rapist and finally the wife is pushed to the edge and she kills herself. And this is where the main story and lead character take over in BEUTIFUL GIRL HUNTER. About the bastard son of the rapist and how after he realizes who and what his father was he wants to embrace the wicked ways of his father. And he does it with a vengeance!

I can’t/won’t condemn BEUTIFUL GIRL HUNTER (BGH for short) because I do like it but this really seems like a movie sex offenders, rapists, child molesters, and even serial killers would like and have in their dvd collection. Probably most of these sick individuals don’t even know about horror/sleaze/exploitation movies but if they did BGH would be a favorite. Because there really is no other point to it than the degradation, violation, and ultimate murder of most of these girls. It is not done in a campy B-movie way and it doesn’t treat the raping and killing of women the way films like LAST HOUSE ON THE LEFT, HENRY: Portrait Of A Serial Killer, or even HOUSE ON THE EDGE OF THE PARK do! In those movies you do get the message that what we are seeing is really wrong and evil and there is some level of revenge and retribution at the end of the story. There is none of that in BGH that I see or sense! I did read some reviews that say BGH does have a social message but I think these reviewers were trying to justify that they like such filth. But I did, I did want to see these cute Asian girls naked and they are beautiful so does that make me a disgusting pervert too? Probably.

There is even one girl that eventually likes and enjoys the torture and rape that happens to her and thanks the rapist, Tatsuya, for what he did to her and he releases her and she becomes a more free spirit and well adjusted human. I think this is what alot of perverts fantasize about, that they will find a girl that will fall in love with them and thank them for raping them. I’ve read true crime books that describes where a man will break into a woman’s house and rape her and then days later come back to the house and ask her out on a date! That’s how crazy these guys are but in reality I don’t think a rapist/killer would release his victim he would just kill them. But I still like BGH! It’s got rape, murder, necrophilia, low level bestiality, torture, girls masturbating, girls peeing, it’s sadistic and brutal and I just wish it had more gore.

It does have some bloodletting but they might as well have gone all the way since they were showing the rape and abuse of women they should of shown the graphic mutilation and slaughter of these gals. yeah, this is one movie you do not want your mom, sister, or girlfriend to catch you watching. Unless they are total freaks but I am not going to get into that in this review!

I don’t like to reveal too much info about the movie I am reviewing but with BGH there really isn’t too much more that I can reveal. He hunts down girls and rapes and tortures and kills them. One particularly nasty thing he does is that he captures a famous pop star and her assistant and takes them down to his secret dungeon and does his usual torture thing and puts them in cages. He treats the singer even worse than he normally treats his gals and insults her while he is alot more nice to the assistant. He wants to bring them down to the level of a animal and eventually he turns them against one another and gets the assistant to abuse the pop singer! And while this is going on his crazy rapist dad has escaped from prison and finds his son and helps him hurt these girls even more! There is a police presence in BGH but for all the good they do they might as well have not been in the movie. They find the bodies he dumps and talk about capturing him but that’s it.

What I did like about it is that the killer/rapist is wealthy so he can afford to act out almost any vile plan he can think up and he does do some pretty outlandish stuff to his victims so he is kind of like a super villain except that he doesn’t wear a costume which would of been really cool but he does have a weird metal mask that he puts on a few times. What I did not like about the killer is that even though he is crazed and brutal and sadistic and perverted as far as movie murderers go he is not very menacing. I know that is kind of scary that someone that looks normal who can move around in normal regular society without people realizing what a sick maniac they are but it’s a movie and in a movie I like my killer to be scary. This guy is no where near as scary as Michael Rooker in HENRY: Portrait Of A Serial Killer, or Terry O’quinn in THE STEPFATHER, or Rutger Hauer in the HITCHER or even Sean Bean in the remake of the HITCHER! And completely incomparable to the likes of FREDDY, JASON, or MICHAEL MYERS! He’s a skinny Asian dude who would make a more convincing transvestite than a bad ass killer. The guy that plays his father is alot more savage and primal.

But overall, yes, I liked BGH, and so will rapists, murderers, and other real life crazies and most hardcore horror movie fanatics. What’s funny is that pretty much every horror fan I have ever met is actually a easy going, down to earth, nice person if maybe a little quirky and are usually appalled by real life violence. But if you are into this pink woman destroying violence then you might all ready have this but if you don’t I hear this is one of the better ones.