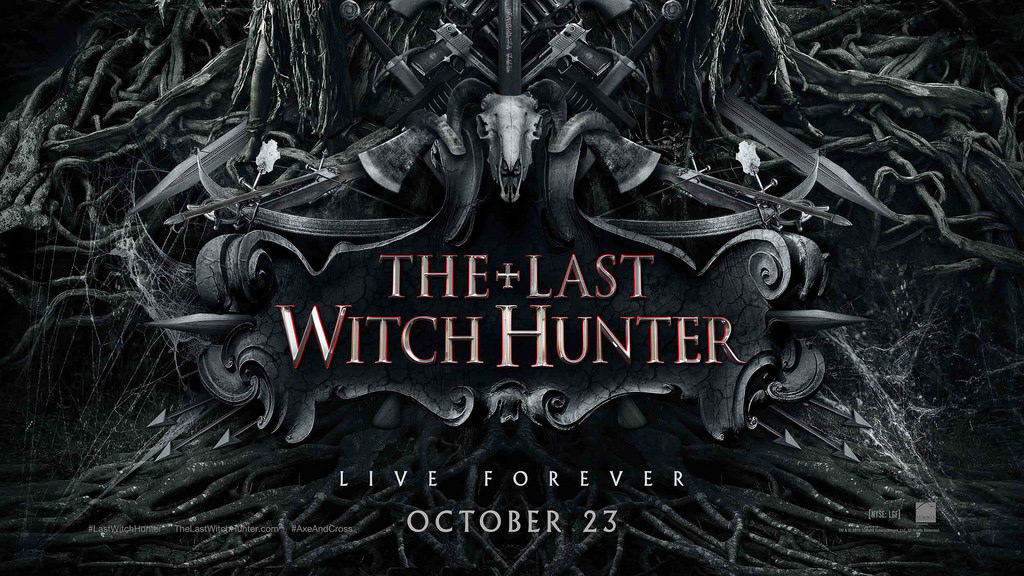 Synopsis: The modern world holds many secrets, but the most astounding secret of all is that witches still live amongst us; vicious supernatural creatures intent on unleashing the Black Death upon the world. Armies of witch hunters battled the unnatural enemy across the globe for centuries, including Kaulder, a valiant warrior who managed to slay the all-powerful Queen Witch, decimating her followers in the process. In the moments right before her death, the Queen curses Kaulder with her own immortality, forever separating him from his beloved wife and daughter in the afterlife. Today Kaulder is the only one of his kind remaining, and has spent centuries hunting down rogue witches, all the while yearning for his long-lost loved ones. However, unbeknownst to him, the Queen Witch has been resurrected and seeks revenge on her killer, causing an epic battle that will determine the survival of the human race.

Exactly why Vin Diesel is so popular remains a mystery to me. Don’t get me wrong, I respect the hard work the man has put into getting where he is today, but he’s not what I’d call a good actor. Actually, he’s a fairly lousy one, with no idea on how to add any inflection to his monotone line readings whatsoever. He basically just repeats what’s in the script and grimaces every once in awhile. His most successful films have been the series of Fast and Furious films, but while he gotten top billing in them, he’s been ably supported by a motley crew of actors that have hitched their collective wagons onto the franchise. Think about it for a moment (I have), just about every film starring Diesel on his own has tanked. The best film he’s ever been a part of is The Iron Giant (1999), and that was just his voice. The same thing goes for his role as Groot in last year’s megahit Guardians Of The Galaxy. His only other role of note is as Riddick, the escaped convict with eyes that can see in the dark. That character was featured in three films, Pitch Black (2000), The Chronicles Of Riddick (2004) and Riddick (2013). None of those films were box office hits, with both Pitch Black & Riddick only scoring mildly at the box office, and Chronicles Of Riddick ending up a major flop. Now why am I railing on about Mr. Diesel’s box office history you ask? Firstly, I’m really quite jealous of the guy, I can wax monotone in a film just as well as he can. Secondly, and more importantly, Diesel’s at it again in a new film called The Last Witch Hunter. Surprisingly, this one actually has sort of a decent premise to hang its hat on, but it isn’t too long before a far too convoluted script, and Vin’s patented monotone line delivery make this one a snoozer of the highest order. 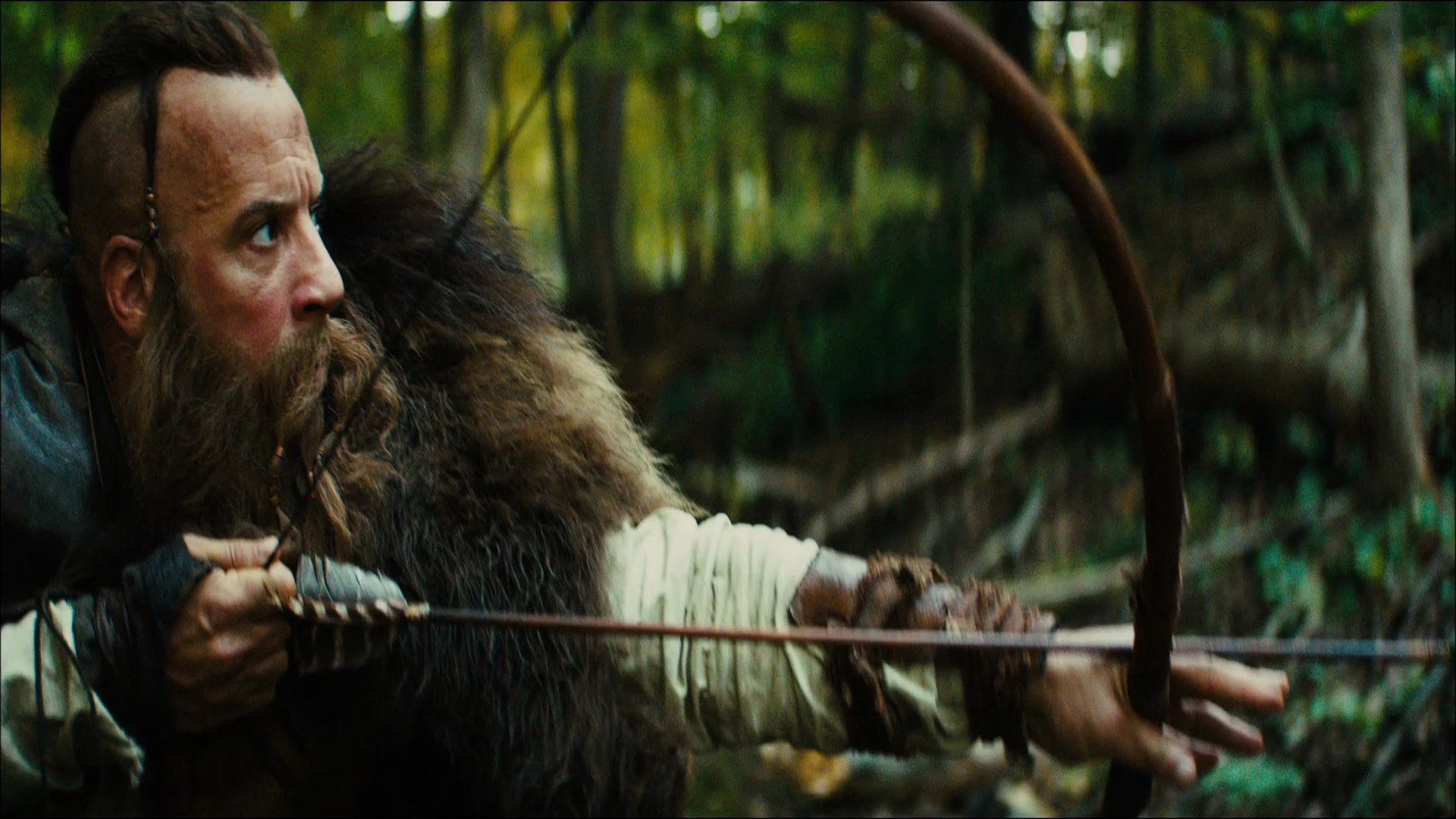 Starting out 800 years ago, Diesel plays Kaulder, a witch hunter who has finally tracked down the nameless witch queen (Julie Engelbrecht) that unleashed the black plague on the Earth. After a short tussle, Kaulder strikes the death blow unto the evil witch, but as she dies she curses Kaulder with eternal life. So Kaulder lives on as everything and everyone he knows (& comes to know) eventually dies. But Kaulder continues on, and in the present, he’s hunting witches as a sort of 007 for a group that has come to an agreement with all witches. The agreement makes it so that your average everyday witch can indeed live among society, but the rogue witches are kept in line by Kaulder. If a witch performs some evil deed, then Kaulder is dispatched to banish them to a hellish underworld where even the worst of the worst witches are scared of going. Kaulder has an assistant, an Alfred to his Batman if you will named Dolan (Michael Caine). He’s the 36th Dolan to be at Kaulder’s side, and is about to retire, and the 37th Dolan (Elijah Wood) is ready to replace him. But after giving his final goodbye to Kaulder, Dolan 36 is placed under a spell that feigns his death, but is actually one that allows a coven of evil witches to resurrect their queen. Once Kaulder figures out that Dolan 36 is still alive (with only a few days to live though), he takes Dolan 37 and sets about to find out who placed the spell on his friend and why. Not long after, Kaulder goes to a dream walker named Chloe (Rose Leslie) for assistance in stopping the witches from bringing back their ruler. 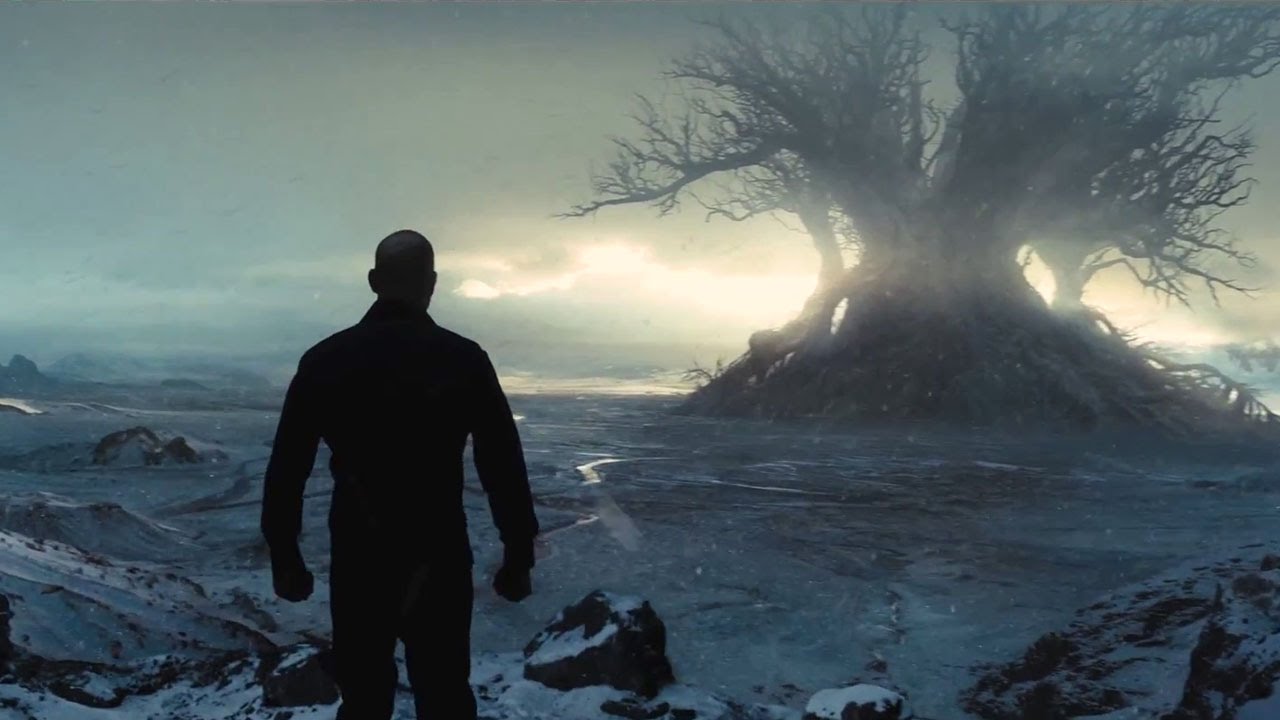 This is the point where the plot (from a script written by Cory Goodman, Matt Sazama and Burk Sharpless) begins to falter. In an attempt to give the proceedings some depth, the script begins to pile on a massive amount of details, twists, and medieval nonsense. It all gets bogged down with so much needless exposition and dialogue that it crumbles under the weight of it all – it’s far too convoluted for its own good. And when a movie is far too convoluted for its own good, that movie becomes boring. Amazingly enough though, Diesel’s usual monotone performance sort of fits this kind of film, maybe because he actually smiles a few times this time around. He actually gives Kaulder and his mission a semblance of gravitas that helps everything feel far more important than it actually is. Michael Caine pretty much does what he usually does, but when he’s on screen with Diesel there’s a genuine sense of friendship between the two of them, he actually makes Diesel a better actor in the few scenes they share together. As Dolan 37, Wood is earnest, likable and innocent, but the film loses some speed whenever he’s on screen. Odd, since he shares a lot of the major action set pieces with Diesel. Leslie is a red haired spitfire as Chloe, and I enjoyed the grit she imbued into her character. But it’s Engelbrecht (under a shitload of makeup) as the witch queen who really stands out the most. She’s a feral, angry, vicious hellcat that really despises Kaulder and all he represents, and Engelbrecht really pours it on. 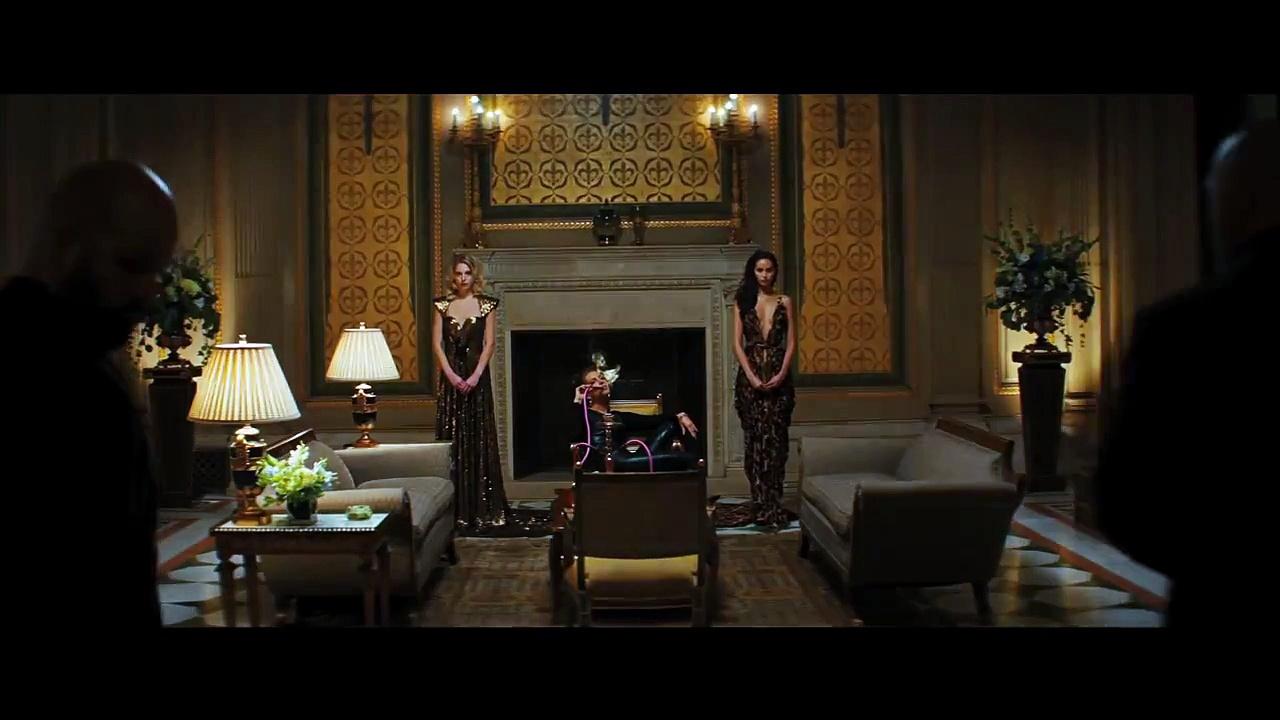 Director Breck Eisner has made one good film, The Crazies (2010), and one lousy one, Sahara (2005). The Last Witch Hunter isn’t very good, but it isn’t too lousy either, and his direction here is sure and steady. Sadly the script makes it impossible for him to make this a good film. Toss in some special effects that look really nice at first, but then you realize that they’re essentially lots and lots of plants/trees that grow all over the place. And when you think there can’t be any more trees that can grow – there are more of them. Lots more of them. Lots and lots and lots more of them. But the cinematography (by Dean Semler) makes them all look nice and pretty. The film takes on a lot of different hues which bring on a nice sense of changing seasons that have nothing to do with the film itself, but sure looks nice anyway. 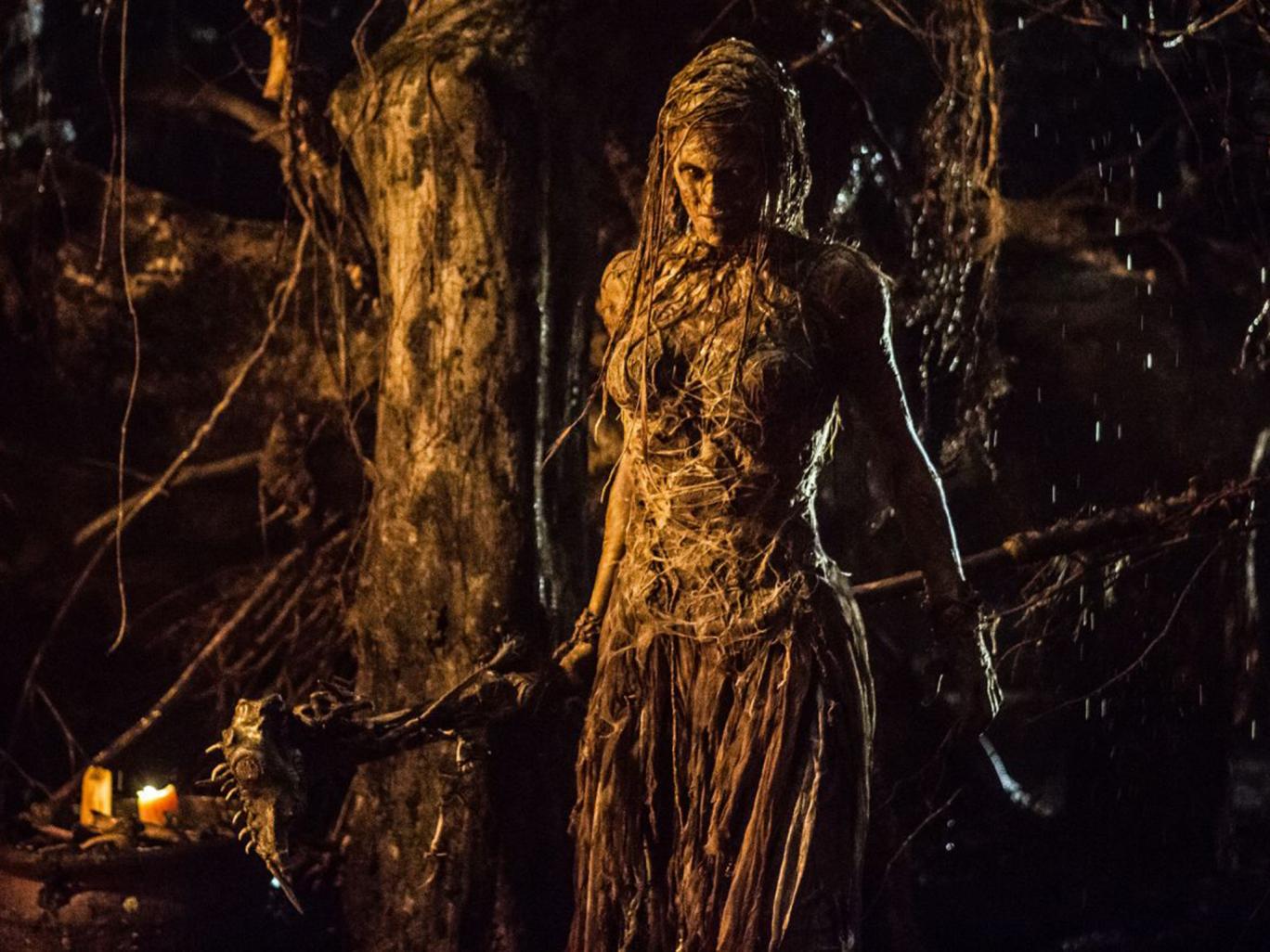 To be honest with you, I really wanted to hate this movie. Partly because (as I said earlier), I’m jealous of Diesel’s success. The trailer really made it look stupid as well, so I was really stoked for a catastrophe of the highest order. And while it isn’t a very good movie, it isn’t exactly a crap fest either. What makes it bad is its ridiculously convoluted plot, which is sad because the idea presented here isn’t one that needs a lot of exposition to get its premise across. It feels like the writers didn’t trust their idea, so they figured the best thing to do is to complicate it to make it feel more important than it actually is. All in all, The Last Witch Hunter will give you a mild buzz as it begins, then it’ll proceed to kill that buzz as it heads towards its finale during which that mild buzz might return to make you feel all warm and fuzzy inside. Too bad though, because the first third of the film does a really nice job of setting the whole thing up before it all comes crashing down in a heap of evil foliage.