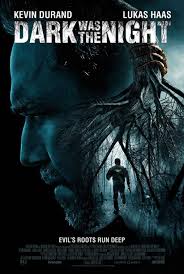 Isolated and threatened, a mysterious force hidden within the trees outside the small town of Maiden Woods, strikes fear in the townspeople as Sheriff Paul Shields attempts to overcome the demons of his past while protecting those that he loves.

Sometimes while watching movies for review, I get this overwhelming sense of deja vu. As someone who literally watches hundreds of films a year, I suppose this is to be expected. But every so often I get a movie to watch that makes me sit up and say “Whoa“. A movie that I really believe is something special, one that I had never heard of before receiving it in my inbox.

A movie called Dark Was The Night.

In the small town of Maiden Woods, something is lurking in the forest. Something vicious. Something feral. Something that shouldn’t exist, but does. Sheriff Paul Shields (Kevin Durand) & his deputy Donny Saunders (Lucas Haas) are on the case, but are ill equipped for what they’re about to face. To make matters worse, Sheriff Shields is going thru a rough emotional period in his life. His young son accidentally died, and he’s having a hard time getting over the loss. He blames himself for the tragedy, and the fallout has taken a toll on his marriage. His wife, Susan (Bianca Kajlich), has moved out and is living with her mother as Shields tries to work through his loss. His other son, Adam (Ethan Khusidman), lives with his mom but spends lots of time with his dad as well. He earnestly wants to bring his family back together, but the guilt that Shields has over the loss of his other child is immense & overwhelming. Shields has gone so far as to get divorce papers written up. Not because he doesn’t love his wife, but because he feels he failed her & his son. He feels they deserve better than him. 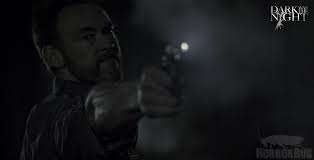 But Shields has a job to do, and there just happens to be a series of animal attacks on the local livestock in the middle of this familial drama. Horses are disappearing, deer are found slaughtered, and an attack on a group of hunters has the town speaking of something unnatural living in the woods, something very fast, something that’s very hungry. Although he’s beginning to believe that the trouble is being caused by a local legend, he’s having a hard time convincing the locals to agree with him. But after a quick encounter with the creature in the woods, he’s convinced that something unnatural is getting ready to make the town of Maiden Woods its own personal smorgasbord. 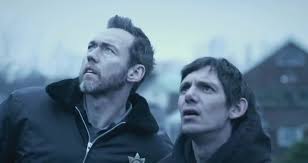 The beauty of Dark Was The Night lies in its characters. Director Jack Heller gets great performances from every single actor, and everyone in the film is completely invested in their roles. Kevin Durand is a face that’s familiar to most (if not all) of you in films like Real Steel (2011), X-Men Origins: Wolverine (2009), I Am Number Four (2011), Resident Evil: Retribution (2012) & Noah (2014) among others. He can also be seen on TV in the FX series The Strain, but his performance here is the best of his career. He carries himself proudly as the Sheriff of Maiden Woods, but there’s a weariness in his gait, and a seething anger behind his eyes. The intensity of his performance is palpable, it literally comes off of the screen. What I was witnessing here was an actor at the top of his game, and Durand knocks it out of the park. He’s ably supported by Haas and Kajlich, who underplay their roles, yet still come across as sincere & believable. Another welcome face in the supporting cast is Nick Damici, who is fast becoming a genre stalwart as both an actor & a writer in films like Stakeland (2010), We Are What We Are (2013) & Late Phases (2014). 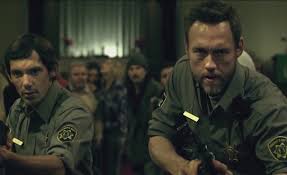 Writer Tyler Hisel does a great job of writing a creature feature in which the creature is almost a secondary character. His script focuses on the people of Maiden Hills, and their personal lives. The creature seems to be an afterthought at times, but you’ll find yourself so engrossed by the characters that when the creature makes a quick appearance, you’ll realize that you forgot that you’re watching a monster movie. It’s a definite slow burn type of film, but it never feels slow or gets boring. It chugs along quite nicely, with the story getting deeper, and then it shifts gears for its final 20 minutes and becomes something of a siege film, with the townsfolk holed up in a church, making their final stand, as the creature is stalking them. The creature itself is hard to describe, but its design is unique & effectively scary. Imagine a combination of the beastie from The Fly 2 (1989) & one of the Teenage Mutant Ninja Turtles – with hooves, talons & very sharp teeth. Now I know that sounds like it might look a bit on the silly side, but trust me when I say there’s nothing silly about the creature in this film, it’s very different & definitely scary. 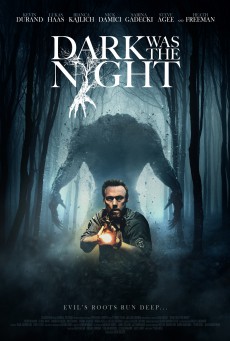 There’s very little that’s wrong with Dark Was The Night, it’s one of the best films I’ve seen this year. It’s emotionally challenging, with some incredibly intense (& believable) performances, and it’s legitimately creepy with an especially vicious creature tearing through it. And to top it all off, it has one hell of a bleak ending – which was quite unexpected. I’m gonna dock it half a shroud for its fairly generic poster image. But that’s hardly a deal breaker because Dark Was The Night is one hell of a great movie! You’d be doing yourself a great disservice if you pass over it because of the drab cover. In my opinion it’s one of the best horror films of the year. Don’t miss it! 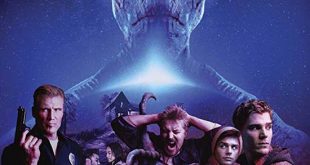