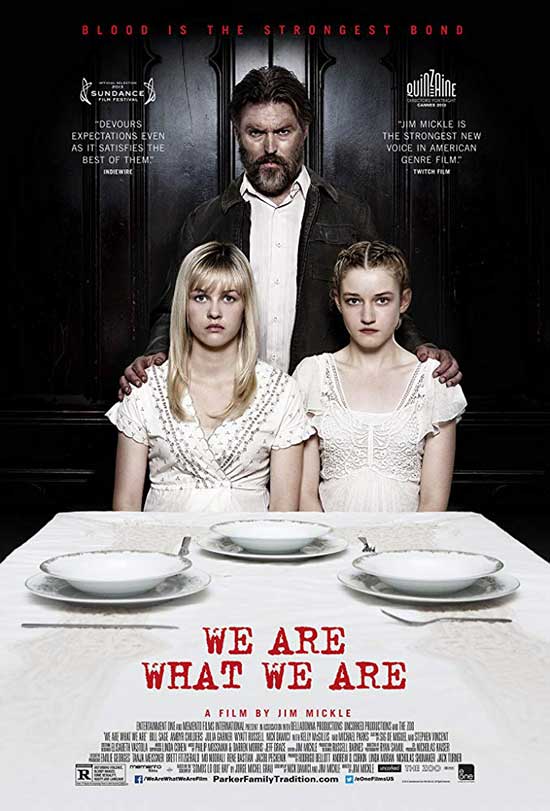 The Parkers, a reclusive family who follow ancient customs, find their secret existence threatened as a torrential downpour moves into their area, forcing daughters Iris and Rose to assume responsibilities beyond those of a typical family.

Directed by, Jim Mickle, We Are What We Are (2013) is a movie I have fallen in lust over. The cast, this director, the intense story of what happens to a family when pushed to the brinks of madness. It is based on the screenplay, “Somos lo que hay” by Jorge Michel Grau.

Shall we talk cannibalism?

The images and shots in the film are stunning. It’s breathtaking even in the gloomiest situations. There is a storm that causes the river to wash some unlikely things to the surface. The Parker house is stunning yet dark. You can feel the sadness. It is Friday in the film and a shaky Emma Parker leaves her house. Emma is at the butcher shop of all places. She is in pain and staring at a missing person’s poster.

She begins to bleed from her mouth and passes out, hits her head and dies. She falls in the water. They cut to, Iris, Rose and Rory are getting ready for the day. They find the note from their mother.  It is abstinence and they can’t eat either.  Frank (Bill Sage) is also a little shaky and fixing a watch. Frank is stern, religious and wants to keep his family together, no matter what the cost.

Marge (Kelly McGillis) is the neighbor watching out her window. 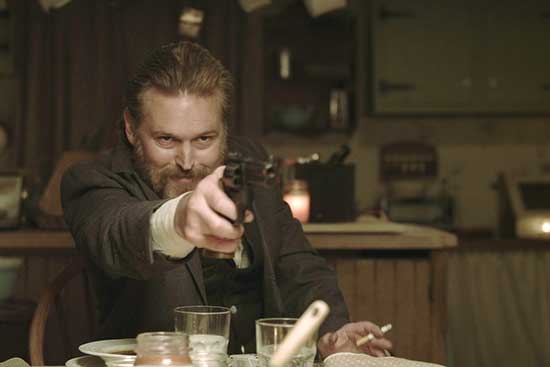 The storm warning sure is a warning. Iris has a thing for Deputy Anders (Wyatt Russell). Iris and Rose go to see Doc Barrow (Michael Parks does an incredible job in this film.) They have apparently found of that Emma has died. He wants to do an autopsy and one of the girls has to identify Emma. Frank doesn’t go to this. You get in many ways, he is heartbroken and losing himself from this dedication. Marge, the neighbor tries to comfort him.

After looking up the Kuru disease, apparently it is a disease from cannibalism. Doc Barrow is conducting the autopsy, he discovers a lot in his findings. This movie is one of those movies you don’t get tired of watching. The story and fascination of what is out there in the world is interesting. “We continue” Frank says. Iris takes the place of her mother as a patriarch figure who must equally take care of the family.

Frank is out for a nice drive at night and spots a woman at her car. (I guess grocery store runs are not a thing for cannibals.) He stops to “help.” By his state of mind, he isn’t helping, he is looking for the family’s next meal. “Daddy’s home.” It gives you goosebumps. Frank is up, it’s Saturday. He opens up a grate on the floor of his bedroom and pulls out a book that is wrapped neatly in a handkerchief.

Doc Barrow is outside tending to flowers and his dog finds something. It looks like a bone. It peaks Doc’s interest. Mr. and Mrs. Kimble (Nat DeWolf and Traci Hovel) we also meet Sheriff Meeks (Nick Damici) and Deputy Anders (Wyatt Wussell), they are helping the Kimble’s find their missing daughter. Frank’s shed/basement is filled with secrets. The young woman is locked downstairs and chained up. You can see the look in Frank’s eyes. He is unraveling in a scary way. The kids are hungry. Rose sneaks some Snap Pops to Rory. 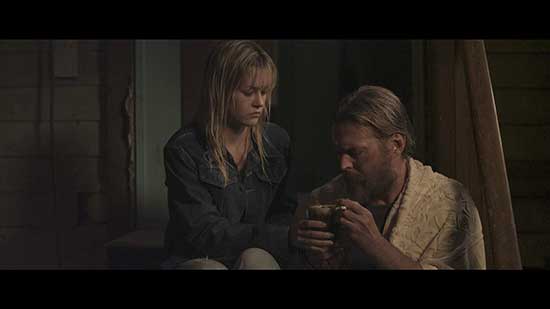 Frank offers Marge a “token” for the kindness she showed him. Frank wants her to babysit Rory so they can attend the funeral. Doc’s daughter is also missing. Iris is preparing to “take care” of things. Julia Garner and Ambyr Childers do such a good job playing these roles. Rory discovers something he probably wasn’t intended to. His sisters later tell him it’s a monster, or at least that’s what he believes. The unnerving moments and subtle frightening atrocities this films brings to fruition is beautiful.

Frank is exhausted and hasn’t eaten, he hands over the book to Iris. He tells her it belongs to her now. It tells the story of a family from the seventeen hundreds that apparently survived on humans. Deputy Anders stops by and talks to Iris.

Iris is in her father’s bedroom, sitting on the edge of the bed and she wakes him to ask him some life altering questions. It is Sunday now, the timeline they provide cuts through some of what we know happened. Doc shows the Deputy the bone. “Three people missing from this town in the last twenty years.” Rory has a fever, he is hungry. Marge is helping and Frank comes home. He informs Marge that shes a good neighbor. He wants to let Rory burn the fever off and Frank is bleeding from his nose now. He has an answer though, dried out from the stove in the shed.

Frank informs Iris, it’s time to eat. Iris must kill the woman locked up downstairs. She must kill, cut her up and cook her into a soup. The flashbacks to the story Iris reads from the book make it more on-edge. It reminds you a bit of Ravenous. The intense buildup of what’s to come and you know it’s horrible. Just as Alyce Parker (Odeya Rush) did for Lamb’s Day in the seventeen hundreds, Iris will continue that tradition. Iris does it too. Marge, a helpful but sadly unfortunate nosy neighbor who is sort of in the wrong place at the wrong time. She brings over vegetarian lasagna. 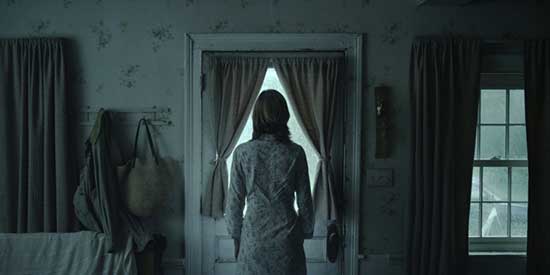 The family isn’t eating that though. They sit, pray and eat the soup made from the woman. Doc and Deputy Anders are searching the creek for bones. Doc says, it looks like “pot glow.” It means the bones have been boiled. Iris and Rose spot them outside. Iris asks the Deputy to come inside, she offers him a pair of her daddy’s socks. The Deputy shares what they found, what he was looking for.

Iris takes the Deputy out into the woods to show him the family cemetery. She thinks this will convince him that the bones are coming from the cemetery. One thing leads to another and these two are hot and heavy UNTIL BAM! Frank shows up and he really busted the mood. Doc is searching for what Emma had and he finds it. A disease from consuming human flesh. The Kuru disease. The taboo and urban legends factor make this film interesting. It isn’t just about cannibalism, it is about this family that struggles with everything. They are trying and yet darkness consumes them.

Regarding Anders and Iris, I was almost waiting for someone to kill him and it happened. Frank buries the deputy in the family cemetery, burns his clothes and keeps his phone. It warns him, hinders him and helps him all at once. Doc is now looking for the Deputy. Iris is devastated. This story is so sad. Frank is outside praying and chopping down trees. He discovers the bones and is one the brink of losing his mind but he wades in the water trying to collect all the bones floating about. Bill Sage’s performance is dark and cold yet he does show a love for this family. It may not be the best way but it is his way. Doc is on his way to the Parker’s home now. He takes a gun from the Sheriff’s office.

The terrifying dinner Frank is about to serve his family is also tragic. He wants to be with his wife. This film is excellent. I remember watching it the first time and now writing this review and watching it again. It is a film you should watch. Also, Bill Sage cooking and smoking with a look of determination.

They don’t show what Frank put in the “soup” until Rose figures it out. It is a Jim Jones mission, a sacrifice Frank wants to make. He prays and his family is what he’s offering. Rose intervenes. Frank tells the kids to leave the table and he speaks with Doc. It doesn’t go well. The family meal is interrupted by Doc, there is a shooting, a fight and Frank fighting. Doc learns some more secrets. The way Bill and Michael go back and forth, this is great acting. Frank is calm and cool. The sins of the father so to speak. 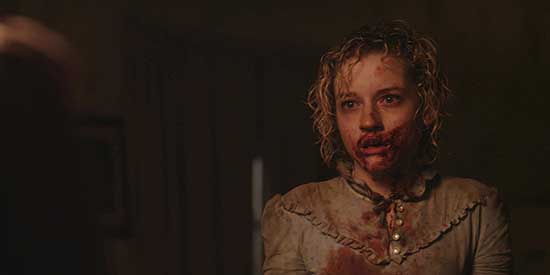 Doc shoots Frank but of course that doesn’t stop him. Rose and Rory try to get away. Iris is in a terrible predicament. Marge wants to know what is happening. Me too, Marge, me too. This is definitely a movie you should watch. Frank is still trying for his dinner.

The ending is insanely good. The shots and the way they went about handling things, was animalistic in the best way.