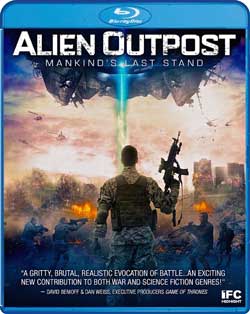 A documentary crew follows an elite unit of soldiers in the wake of an alien invasion.

Jabbar Raisani’s filmmaking background is mainly in visual effects. Take a look at his IMDB page and you’ll see it bustles with work on Game of Thrones, Machete and the remake of Fright Night. It’s certainly not a bad CV. Adding another feather to his cap is his feature length debut, Alien Outpost, which he also wrote.

Set in the near future, Earth is still patching itself up after a decade old alien invasion. With the UN dismantled to make way for a unified military force that eventually won the war, the world puts Band-Aids on boo-boos and hopes that they can get on with their lives. Unfortunately, an overspill of aliens, known as Heavies by humans, still roam the Earth, abandoned by their leaders and seemingly thirsty for revenge. To combat this, a series of outposts have been set up to keep tabs on these groups and crush any attempts at another invasion before it starts. 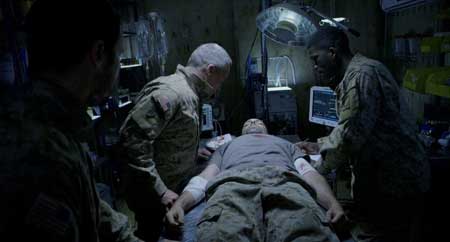 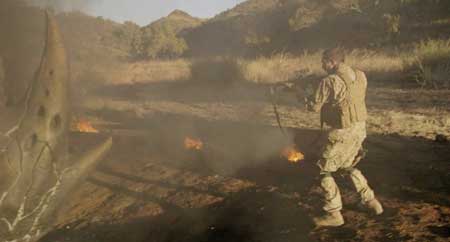 Set out like a documentary, Alien Outpost takes us to Pakistan-based Outpost 37, where a group of grunts are entering the twelfth month of their 6 month tour of duty. Unsurprisingly, the soldiers are a little bit hyper, paranoid and ready to fight. They beat their chests, call each other homophobic slurs, and whoop and holler about the good old U S of A. If you were thinking this sounds like a vague allegory of America’s military involvement in Afghanistan and Iraq, you’d be wrong. It’s a blatant allegory of America’s military involvement in Afghanistan and Iraq. Envision if you will, Robert Altman’s MASH, but remove the subtlety, the humor, the pathos, the fun and the personality.

With the Heavies very rarely seen on screen, we spend a lot of our time in Outpost 37 as the soldiers grunt at each to prove their masculinity. Raisani’s evidently trying to show the duality of man and the complex emotions a soldier goes through when they are cut off from family and friends for long periods of time. A little bit of metaphorical whacking your member on the table to see whose is biggest is to be expected. However, Alien Outpost seems to brimming over with whacked out members. Not a scene goes by without someone chomping on a cigarette, puffing out their chest and waxing lyrical about being a ruddy man. 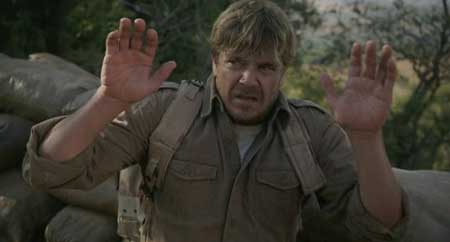 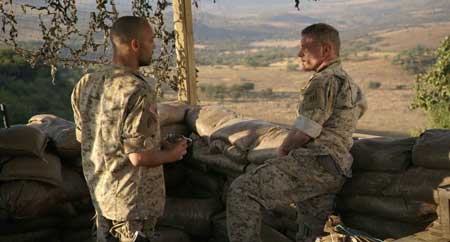 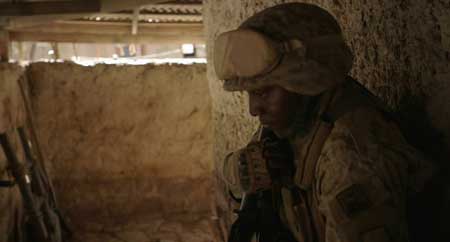 Alien Outpost unfortunately can’t enjoy the subtleties of anything. When a young Pakistani man dies near the Outpost, he’s given a traditional Muslim burial. A touching scene promptly ruined when a soldier explains he knows how to perform such a ceremony because he knows how the ‘enemy’ thinks. Yes, apparently despite the 10 year long fight with aliens, Islamophobia still runs rife. If the comment had been made in a film such as Zero Dark Thirty, we could (almost) let it slide, but here it stands out like a sore thumb with no reference being made that the world is up against Islamic forces. So hasty is the film to paint its metaphor that it leaves these moments in, presumably so we can all take a good long hard look at ourselves in the social justice mirror. And that’s me giving it the benefit of the doubt. 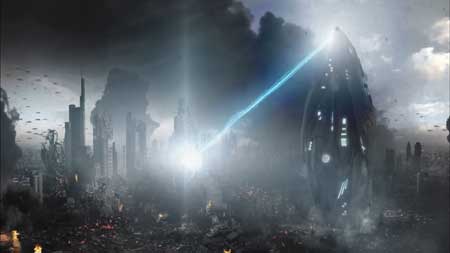 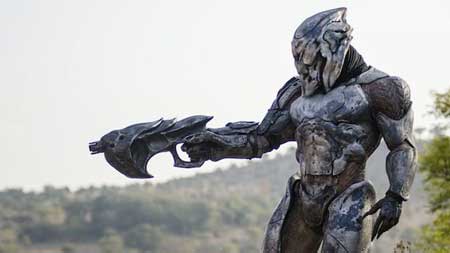 What it does instead is further compound my utter dislike for anyone on screen. When things start getting a little Alamo in the final act, I was hard pushed to decide who I wanted to go first. Was it the aforementioned Islamaphobe, the buff doctor who thinks injured people are wussies or the German soldier who brings as much to the story as he leaves with; nothing.

Whilst there is always room in cinema for another satire, this kind of meathead, do what the government tells you narrative has been done much better in films such as Paul Verhoeven’s Starship Troopers. In that film Verhoeven says that war makes fascists of us all. The message of Alien Outpost appears to be merely make ‘em bleed.

Alien Outpost in now available on bluray per Shout Factory