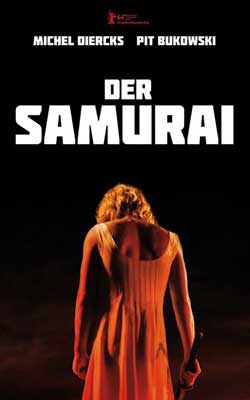 A wolf strives through the woods around an isolated German village. Jakob the young local police officer is onto him, but scents something more in the darkness. What he finds is a man, it seems, wild eyed, of wiry build, in a dress. He carries a katana, a Samurai sword. When the Samurai invites Jakob to follow him on his crusade towards the village, it becomes Jakob’s mission to pursue the lunatic to end this wanton destruction. At the end of the night Jakob has experienced too much, is too far from whom he once was. Something hidden has been unleashed to meet the first rays of daylight.

At one point in Der Samurai, and this isn’t really a spoiler so don’t worry, two men face off in a forest on the outskirts of a village in Germany. Both are tired and bloody. One holds a samurai sword aloft; the other has a more personable weapon – his erect penis. As if announced by an unknown referee, they charge at each other, teeth bared. 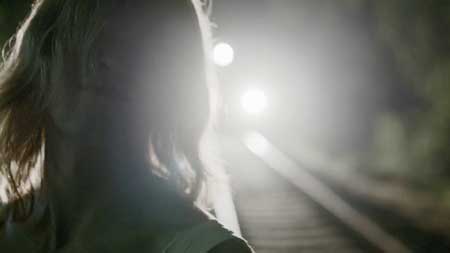 If that has intrigued you in anyway, then allow me to point out that this is merely the tip of the iceberg in this thriller-cum-surrealist nightmare built upon a foundation of queer cinema.

Michel Diercks plays Jakob, a young rural police officer on the hunt for a wolf that’s making a violent nuisance of itself in the village where he lives. Every day Jakob ventures into the forest to leave bags of meat out in the hopes of drawing the wolf out. Despite Jakob’s initiative, his superiors worry that his efforts will attract something else. And in hindsight, they’re right to be worried. Instead of canis lupus, Jakob’s actions draw out an altogether different kind of beast.

After receiving a parcel addressed to someone other than him, Jakob receives an invitation by telephone to drop the parcel off at an abandoned house deep in the woods. It’s there he meets The Samurai, played with wild-eyed intensity by Pit Bukowski. The parcel is for him, and its contents is, unsurprisingly if you’ve been paying attention, a samurai sword. 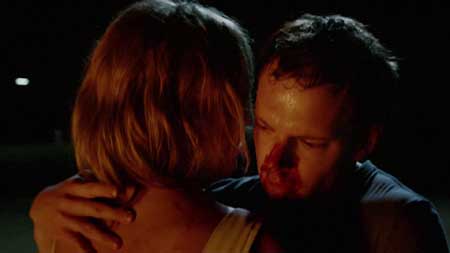 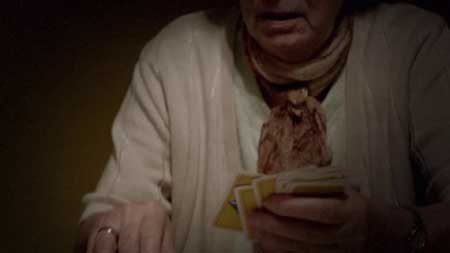 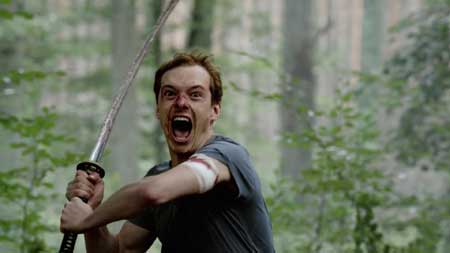 Donned in a white dress and red lipstick, the Samurai is for some reason hell-bent on tearing up Jakob’s life; flying through the village hacking at garden gnomes, washing on the line and, almost inevitably, people. Through this Der Samurai leads its audience on a repetitive but enchanting dance. Jakob catches up with the Samurai, and after a metaphor/innuendo laden discussion, the sword-wielding maniac manages to give him the slip. With each new encounter, Jakob fails to learn much about the Samurai, but does begin to understand more about himself.

Narrative wise, Der Samurai can be seen as an allegory on sexual identity, which the Samurai personifying all of Jakob’s fears and insecurities that he bottles up on a daily basis. The question is does he allow the Samurai to consume him or make a stand. 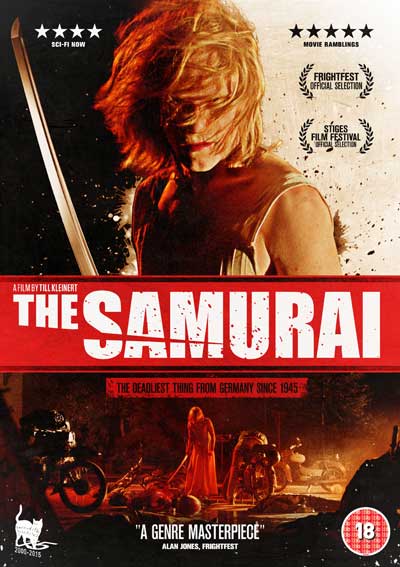 For Jakob is not like everybody else. He’s the quiet boy of the village, picked on by the local ruffians for being different. And not just because he’s police officer. Even his own colleagues eye him with suspicion. When news travels that a man in a dress is running amok, Jakob’s commanding officer calls to see if there’s any possibility it’s really him. The Samurai, having exploded onto the scene, constantly makes Jakob question his life choices and place within the community of the village. Each encounter between the two men is clearly sexually charged with The Samurai’s taunting wrapped up in lacey flirting.

As previously hinted at, Bukowski is a tour de force as the titular antagonist. Part Hannibal Lector, part Jame Gumb, part Joker; he commands the audience’s attention each time he’s on screen making Jakob dance to his tune. His seductive dark side sets the tone for the entire film. Diercks for his own part gives a nuanced performance that grounds the film even when it spirals into a hurricane of lobbed limbs and fantasy. The only real qualm I have is Jakob’s desire to apprehend the Samurai by himself. Though it could be argued that his reluctance to call for back up highlights a lack of trust he has in those he works with. 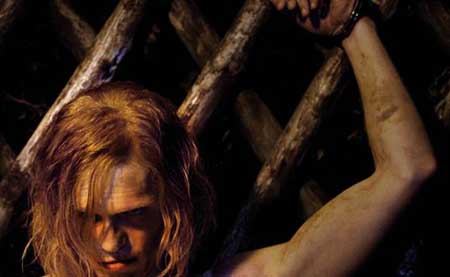 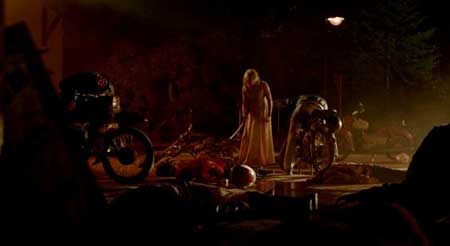 Exciting, sexy and violent, Der Samurai is a multi-layered, dark fairytale that will appeal to those with a love of European horror. It will equally attract those who tire of the usual cis-normative pairings of the brooding, sexy psycho and his doe-eyed, quivering damsel. Der Samurai is a genuine must-see.