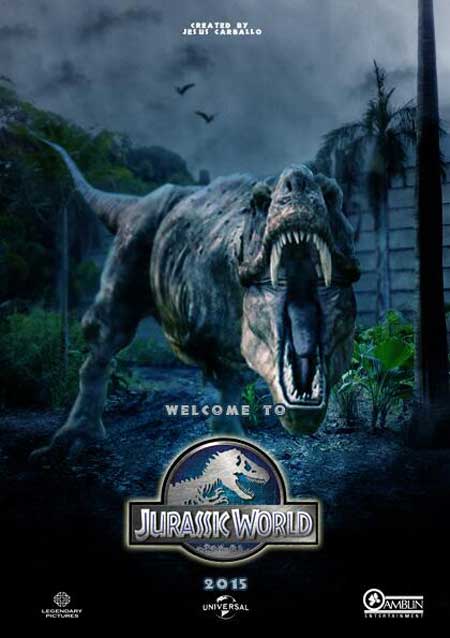 Twenty-two years after the events of Jurassic Park, Isla Nublar now features a fully functioning dinosaur theme park, Jurassic World, as originally envisioned by John Hammond. After 10 years of operation and visitor rates declining, in order to fulfill a corporate mandate, a new attraction is created to re-spark visitor’s interest, which backfires horribly.

Twenty two years after Jurassic Park (1993) comes Jurassic World, in which a bunch of people find themselves in danger as they’re pursued by dinosaurs while on vacation.

Pretty much ignoring the events of The Lost World: Jurassic Park (1997) & Jurassic Park III (2001) and taking place 10 years after the events of the first film, Jurassic Park is now known as Jurassic World, a bigger, better park with a new attraction designed to attract new patrons. And since people never really learn from their mistakes (a theme park featuring live dinosaurs is not a good idea in my book), the newest attraction is a dinosaur created by science through gene splicing and all other kinds of scientific mumbo jumbo – a dinosaur dubbed Indominus Rex. And of course, this being Jurassic Park (where things don’t always go right), Indominus Rex gets loose. And it’s not a particularly nice dinosaur either…

But I’m getting ahead of myself. 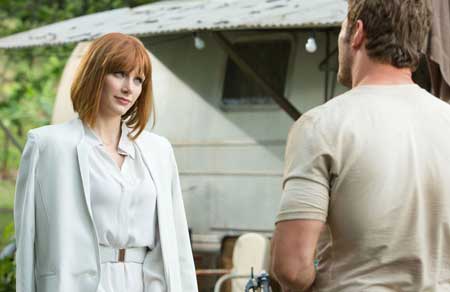 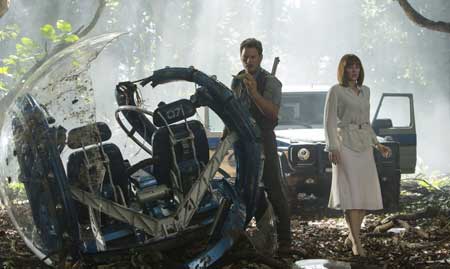 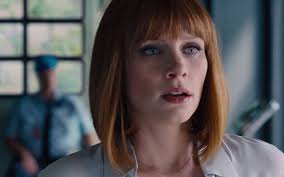 Or am I? One of the good things about this film is that it pretty much gets right to the point, without much characterization. Then again, why does it need something like believable characters when it has a herd of dinosaurs traipsing across the screen to keep our interest? Bryce Dallas Howard plays Claire Dearing, an executive at the park who is courting new investors by spearheading the creation of new attractions at the park. Chris Pratt plays Owen Grady, who’s training Velociraptors (although for the life of me, I don’t recall exactly why he’s doing this. Or why he’s so good at it). And once Indominus gets loose, it falls upon Owen and Claire to put it down. The script (by Rick Jaffa, Amanda Silver, Derek Connolly & director Colin Trevorrow) manages to include just about everything that each and every Jurassic Park film featured in them. Nice dinosaurs? Got ’em. Mean dinos? Check. Preternaturally intelligent kids who know a lot about dinosaurs (& everything else)? Got them here too. Bad guys? We get Vincent D’onofrio as security chief Hoskins (who has insane ideas about using trained raptors as weapons of war) and BD Wong as Dr. Henry Wu, who spliced the genes together that created Indominus.

None of these characters are particularly memorable, and save for Howard (who seems to be genuinely horrified at what’s happening to her park), all of the characters seem bland and cut from the same piece of cloth. Pratt doesn’t so much act as he does strike a series of heroic poses as he taciturnly orders people around and even the kids don’t seem to be all that into it. Zach (Nick Robinson) & his younger brother Gray (Ty Simpkins) pick an unfortunate weekend to visit their aunt Claire (Howard), who has little time to spend with them. They’re squired about by a nanny of sorts (who meets a particularly cruel fate), and always seem to find themselves in the thick of trouble. But since they’re kids (teens maybe?), it’s pretty much a guarantee they won’t get eaten. 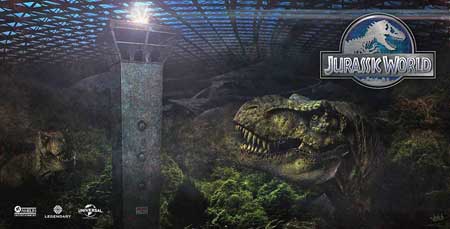 But none of the cookie cutter characters make much of a difference anyway, since we’re here to see dinosaurs. And we get plenty of them, with pretty much the best CGI dinos you’ll ever see in a film. The raptors have a bit of personality to them (thanks to their trainer, Owen) & even Indominus has a gleam in his eye that represents a lot more intelligence than a dinosaur should have. It’s almost fair to say that the dinos on display here are at least as smart as the humans, and in some situations – smarter. But that’s one of the dumb things with this movie, for as gorgeous as it all is – it’s tremendously stupid. It’s actually one of the stupidest movies I’ve ever seen, and as I consider myself a connoisseur of all that is stupid – that’s saying something. I mean, the very idea of a theme park with dinosaurs roaming about is dumb to start with, but at least in the first Jurassic Park film, it all felt plausible before it went kablooey.

The 2nd & 3rd entries in the series just highlighted the stupid to the point where I seriously wondered why I bothered to watch them in the first place, but Jurassic World trumps them all easily. Things happen in this film that just don’t make any sense whatsoever, and I flat out refuse to believe that sane people would take their families on some of these “attractions”. 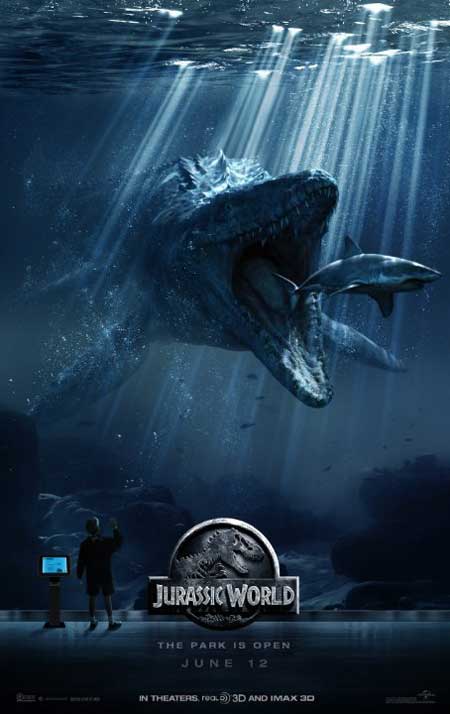 Take for instance the gyro balls that carry two occupants, and can roll around the park with impunity since they aren’t on a track to guide them through safely – why wouldn’t a few dinos start knocking the balls around? Or the knuckleheads happily canoeing alongside plant eating dinos as they munch on trees. I know, I know…they’re plant eating dinosaurs, so they shouldn’t be interested in meat – right? Fine, but what if the canoes annoy them all of a sudden? And they decide they wanna just stomp the canoes out of existence? Are you trying to tell me that isn’t possible? The makers of Jurassic World are trying to tell me just that. Add that to the fact that Howard’s character goes through the entire film wearing high heels (through a forest, mud, wreckage, sand, and deep water), and never once needs to take them off. She must have the ankles of Mercury, messenger of the gods. 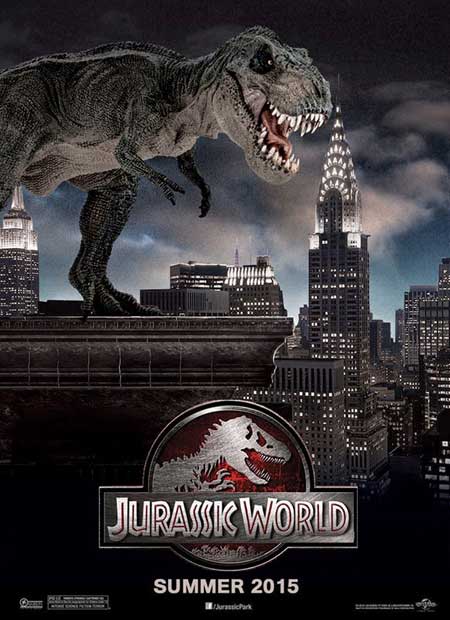 It all ends up back at the park entrance, with a titanic battle between Indominus, a raptor, and a surprise dino that is indeed very pretty to look at, but silly nonetheless. In my opinion (omitting the first film), all the Jurassic Park films really do is show off their fancy CGI dinos. Actually, that’s what the first film did as well, but it was new & unique back then. Nowadays there are about 15 films with CGI dinos released straight to video every year. And nearly all of them have some clown trying to use dinos as weapons, so that particular plot thread is already tired and dull here in this film. I’m not gonna lie, Jurassic World isn’t boring but it isn’t anything you’re gonna want to write home about either. You get your dinosaurs, and you get the dummies that created them, and you get the expected carnage – but its all been done before. It looks great, but it didn’t excite me in the least. It’s just another mindless, blockbuster with a lot of pretty colors/noises tossed at the audience to help them forget that they’ve seen it all before. You’d think that people would know that from watching the trailer, but they came to this in droves over the weekend. Jurassic World has already made about eleventy seven hundred zillion dollars (actually $500,000,000) – in only 3 days!

So what do I know?