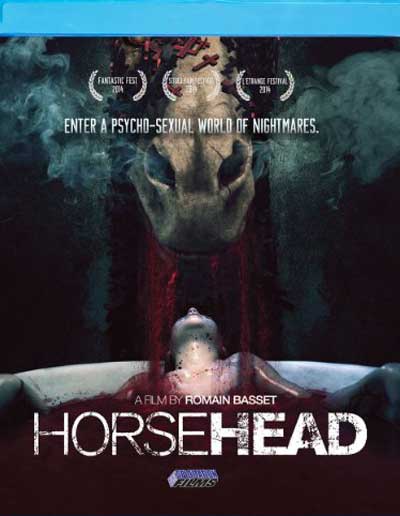 Since her childhood, Jessica has been haunted by recurrent nightmares whose meaning escapes her. This peculiarity has led her to study the psychophysiology of dreams and to follow a therapy with Sean, her mentor and boyfriend, to try and understand the origin of her nightmares.

I’m not sure when I became aware of people wearing horse head masks as a thing, or realized how much I don’t like it. It may have been the last comic convention I worked at. Amongst the Wolverines, Egon Spenglers and plentiful supply of Marty McFlys – Christopher Lloyd was guesting that year – there would be the occasional person in normal clothes topped off with a latex horse’s head mask. The combination of equine plus human is an unsettling image to be confronted with. No amount of Bojack Horseman is going to prepare you for the sight of a google-eyed pony in a suit gallivanting around a convention center. By its very nature, it’s an affront to humanity. I have nothing against you personally if you dress like this, but know this… Like pictures of cats on their hind legs, you’re just wrong.

So, when I’m faced with a film title like Horsehead, directed by Romain Basset, I’m already prepping myself for disturbing imagery. The cover is resplendent with a nubile woman, floating in milky bath, being perved on by a skeletal horse. It’s the stuff nightmares are made of. Which is kind of appropriate considering eh contents of the film.

Lily-Fleur Pointeaux (Ronin) plays Jessica, a wayward daughter returning to her family home during the final days of her grandmother’s life. Welcomed with open arms by her father, she receives a cold front from her mother. A long-standing passive aggressive relationship stands in for the love commonly associated with a mother and her daughter. Things certainly don’t get much better for Jessica when she finds that her dying grandmother is gasping her last breathes in the room next to hers. Perhaps this is why Jessica’s first night leads to a bloody dream of grandmother scrabbling on the floor looking for ‘the key.’ 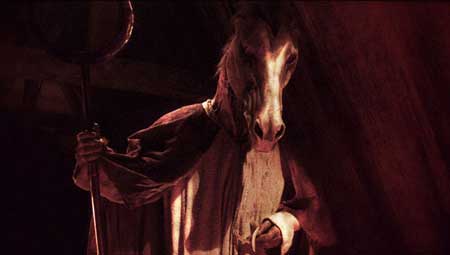 Having studied lucid dreaming, Jessica decides that there’s more to the dream than just the morbidity of lying near your granny’s final moments. Dosing herself with ether, Jessica plunges head first into her dreams and in doing so, begins to unravel a family mystery going back several decades. From this point on, Horsehead, like Jessica, floats in and out of reality, often with both dreams and reality melding into a c**ktail of symbolism.

Sometimes Jessica is getting romantic with her grandma; sometimes her pregnant mother has a bally full of oversized knitting needles. All of it filtered through the lens of a Nine Inch Nails video, circa mid-90s.

There’s not a lot of Horsehead that makes much sense and that’s the whole point. As Jessica delves deeper and deeper in to her dreams, she begins to risk her health and her sanity. Her parents, rather than take her to a hospital, continue to care for her whilst mummy snipes at her from the corner of her mouth. It’s only as the film stalks towards the final half hour that the pieces of the puzzle fall slowly and cautiously into place. Once they do, anything you can’t deal with after that is your own problem. Which is all very fine and well, but the end doesn’t truly justify the means.

Horsehead asks its audience to canter around and jump over obstacles for a large duration of the movies running time and then consider its own conclusion a reward. But there isn’t really an ending, for no matter what we’re shown, we’re never fully confident that Jessica is right in her estimations.

She is, after all, tripping on ether and buried away in her own subconscious. There is the suggestion that Jessica is mentally unwell, the product of an equally unwell mother, but again, we only ascertain this from what Jessica believes she sees. In terms of characterization, we have come from nothing and we go back to nothing. We have learnt naught. And whilst Horsehead looks richly delicious with its kaleidoscope of golds and reds, and teeters on the edge of subtle eroticism, it is ultimately a little empty. Not quite the best in show.