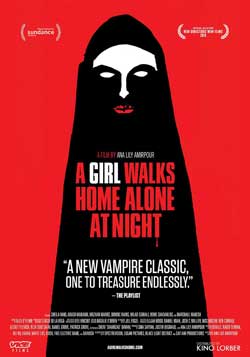 In the Iranian ghost-town Bad City, a place that reeks of death and loneliness, the townspeople are unaware they are being stalked by a lonesome vampire.

OK…so I saw the description of this film – “The first Iranian Vampire Western” – and like I wasn’t going to watch that. However, to clarify: This is not a foreign film. It is an Independant black and white film shot in California in Farsi (Persian) written, directed, and produced by Iranian-American Ana Lily Amirpour. In fact, the entire cast are Iranian-Americans. And not for nothing, but one of the executive producers for this film is Elijah Wood. Yes, THAT Elijah Wood. Not sure how exactly how he became involved with this project, but I would like to thank him someday.

Before I get started, I should address a few other things in the description. Yes, it is a vampire movie…sort of. The vampire is actually the least of the focus of the story. Technically, it isn’t a western as it set in modern day but there is a familiar vibe to the spaghetti westerns of the 60s and 70s. Also, at least the version I watched is subtitled. So you don’t have to know Farsi to watch it.

Finally, I am not certain if the film is supposed to be set in Iran, or in an Iranian enclave in California or perhaps another country. The fact that I really can’t be sure is part of what I really love about this film. But I’m getting ahead of myself….

The story plays out in a fictional place called Bad City, apparently a very poor barrio or ghetto in whatever country it is in. We meet Arash (Arash Marandi), a working class stiff who has scrimped and saved his wages as a landscaper and handy man to buy one luxury – a bitching automobile. He also steals a cat in the beginning of the film. Not sure why exactly, but stay with me.

Arash comes home to his father Hossein (Marshall Manesh) who is a full-blown heroin junkie. There are hints as to what happened to Arash’s mother – divorce, maybe she died, they never say for certain – but in her absence there is pretty much nothing left of poor Hossein. The local dealer/pimp Saeed (Dominic Rains) shows up looking for his money due, which of course dear old dad doesn’t have, and Saeed takes Arash’s car in lieu of cash.

Already, you can see how this situation kind of sucks out loud. But we aren’t done yet.

See, the family Arash works for has a wanna-be debante daughter Shaydah (Rome Shadanloo) who thinks it’s funny to hit on and fluster the help. So yea…awkward for poor Arash. Who swipes her diamond earrings in an attempt to buy back his car from Saeed. I have no problem with that.

Meanwhile, our boy Saeed is making his money not only by selling drugs, but also from hitting up the local streetwalker Atti (Mozhan Marno)…both for money and, well, other perks of being a pimp.

Our cast of characters is rounded out by a rockabilly drag queen (Reza Sixo Safai) who throws epic costume parties and a street urchin (Milad Eghbali) looking for his next meal. It is at one of the Rockabilly’s costume parties that Arash crosses paths with the “princess” Shaydah and everything starts to happen. but once again, I’m getting ahead of myself…

See, there’s this girl (Sheila Vand) in a chodor wandering the streets at night. She happens upon the pimp/dealer and he decides to take her home…like you do, apparently. He spends a fair amount of time showing off and generally being a douchebag until the girl finally eats him.

Yes. EATS HIM. She’s a vampire.

As she is leaving Saeed’s home, Arash shows up with the stolen earrings to negotiate for the return of his car. Oops, dude’s dead. So Arash does the reasonable thing:steals everything in sight, grabs his car keys from the dead guy’s pocket, and splits. 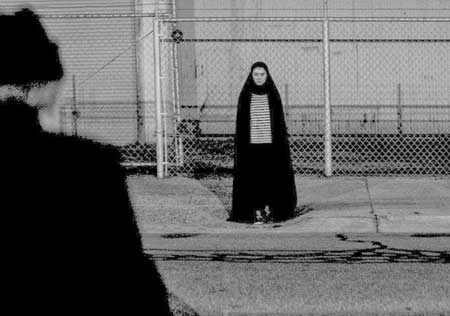 Back to the aforementioned costume party, where the Princess doses Arash with Ecstacy. Trying to find his way home, he runs into our girl in the chodor.

She does not eat him at this time (sorry..Princess Bride reference, couldn’t help myself).

From this point forward, the story blossoms outward, engulfing all of the characters we have been introduced to in one way or another. I know it is supposed to be a horror film, but it’s not so much frightening as it is so very, very sad.

This is more of a modern fairy tale, focusing on this small cast of characters who are so unhappy and unsatisified with their lives. Sure, we get a few kills by the vampire but it’s not really about that.

All the cast in this film have fairly extensive credits listed on IMDB, so for an indie it has a lot of “star pull”. And I would be remiss not to mention the amazing soundtrack/score, which features indie Iranian rock acts such as Radio Tehran. I don’t know if the soundtrack is available for purchase, but you can check out some of the incredible music here – play.spotify.com/user/jeremywest/playlist/30GqCg1iMZ0X8LJCHfWj9G

The film is atmospheric and surreal, and beautiful to watch. With a run time of close to two hours, there are of course some sections that seem to drag a bit. But if you stay with it, it really is an amazing film. To be honest, I’ve never seen anything like it.

If you are looking for a bloody, gory vampire flick, you will be disappointed. But if you have an open mind and can embrace a modern fairy tale with a not-so-happy ending, then I think you will really enjoy this film. I certainly did.

So on a scale of one to ten, ten being awesome, I’m giving this film 9 earrings.