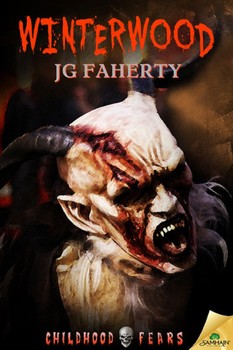 There’s nothing more Anders Bach loves than a good, gripping story with a moral. For years he’s shared his tales with his daughter and now his grandchildren. His old tales of Winterwood are intended more for a cautionary message rather than a morbid ghost tale. Anna, his daughter takes exception to the fact he’s sharing his grisly stories with her sons until they disappear one fateful night. Now Anders fears the worst for his grandsons Nick and Jake knowing deep in his heart and soul they’ve been captured by Krampus and held prisoner in Winterwood where children are baked into pies or held in eternity in slavery. Will Anders be able to escape with his beloved grand children in tact or will they succumb to the ultimate sacrifice within the realm of Winterwood.

Author JG Faherty never ceases to amaze. Anyone familiar with my reviews of his work will know full well how much of a fan I’ve become. There’s something most distinct in the manner he consistently impresses his readership. In the instance of Winterwood I’m fascinated at this author’s level of diversity in creating a tale completely different to anything he’s done before.

Faherty takes an intriguing journey conceived through folklore, fairy tale and legend while exploiting some of the most bone chilling, grisly plot points that even the Grimm Brothers themselves would envy. Winterwood isn’t precisely a deconstructive plot of an existing legend but more accurately elements of old tradition fabricated in such horrific grandiose that youngsters will be prompted to be good little boys and girls. From carnivorous reindeer to blood thirsty elves and a terrifying creature stalking the night known simply as The Yule Cat, Faherty flexes the imagination of a cherished time and wrings all of the fear elements out that will resonate within a large audience.

At first glance it may be a little perplexing as to why the folks at Samhain Publishing had chosen to market a seasonable tale such as this in the month of May. It seems to make sense to release it around Christmas for maximum impact. Perhaps there is reassurance in knowing this tale was included in a collection surrounding childhood fears and the time of year is really of no consequence. The central theme of collective juvenile terror makes more sense in this case and should alleviate any preconceived musings.

The prose of one JG Faherty is forever compelling and each story is every bit as mesmerizing as the last. Few readers will be able to put down Winterwood once the odyssey has begun. Each page gets more suspenseful, the plot escalating to the very creepy and somehow heartfelt climax.

The realm ruled by Krampus The Holly King is surreal and horrific, provoking our most inner, intimate fears. Faherty seems to have a knack for beckoning what makes us afraid through vivid imagery that would translate brilliantly into a film. I envision Winterwood making a stellar Tales From The Crypt chapter if it were still in circulation. Few directors would be able to convey all the variables within this skin crawling equation to render the audience as spellbound as the author never fails to deliver.

Interpersonal relationships between Anders and his daughter Anna is endearing. The swaying pendulum of their emotional compatibility is one if not all of us can relate to. We subconsciously cheer their success and live vicariously through their victories.

The subtext on making good on a karmic debt is profound and prevalent throughout. Anders is devoured with guilt and remorse over the manner Anna perceives him and attempts to forever redeem his misunderstood ways by bringing his grandsons Nick and Jake to safety.

An enchanting, spooky holiday themed tale that doesn’t have to be read around Christmas to fully enjoy. I for one cannot wait until the next Faherty voyage.