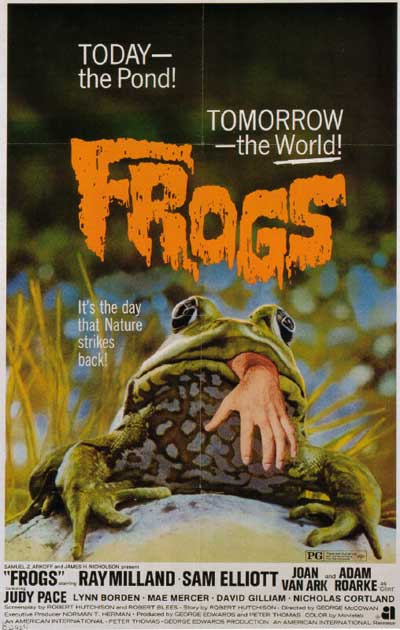 SYNOPSIS:
A group of hapless victims is invited to an island estate crawling with evil frogs.

One of the most important things on Earth is nature. Without nature, we would have no chance of survival. We rely upon nature to live. As a species, we began as hunter-gatherers. We hunted the animals and gathered the plants. We breathe in oxygen and breathe out carbon dioxide. Plants breathe in the carbon dioxide and breathe out oxygen. Plants and animals are still the originating source of sustenance for the human race. The lakes and ponds provide water for people to drink. All of this stuff is nature and all of it is important for our continued survival as a species or as a planet. 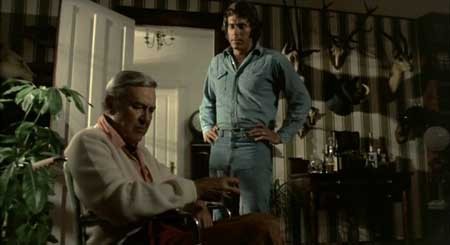 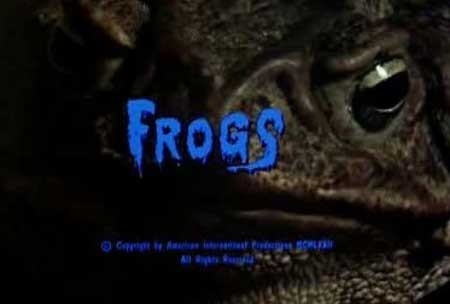 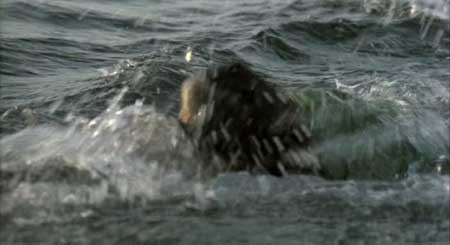 Sometimes movies like to remind the human race that nature should be nurtured and not abused. A movie that presents this message is the 1972 cult classic, Frogs. When Pickett Smith (Sam Elliott) is canoeing on a water system and taking pictures of the polluted water, he is capsized by Clint Crockett (Adam Roarke). Clint then invites him to the Crockett family estate to dry off and recover from the long day. While at the estate, Pickett discovers that animals are fighting back against the family and pollution. Led by the frogs, the animals begin killing off all of the people on the estate.

The toughest part to understand about the movie is why the frogs don’t do more of the killing themselves. They sit back and let the other animals do it the majority of the time. Snakes, lizards, alligators, birds… Even a snapping turtle gets in on the killing. The frogs do not do much for the majority of the movie. It makes the name feel weird even though the frogs are the animals orchestrating the guerilla attacks upon the estate dwellers. When you watch a movie called Frogs, you think that the frogs are going to do the attacks, yet it’s all of the other animals doing it. 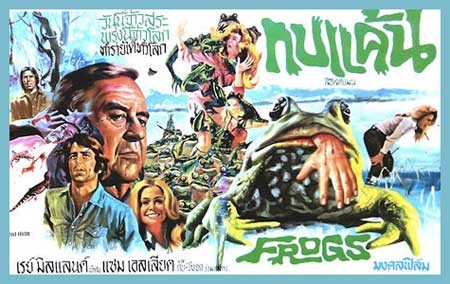 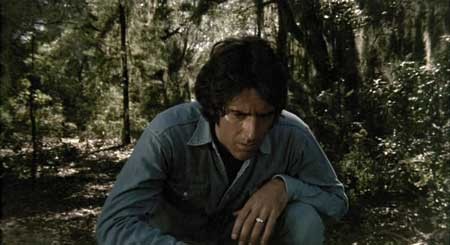 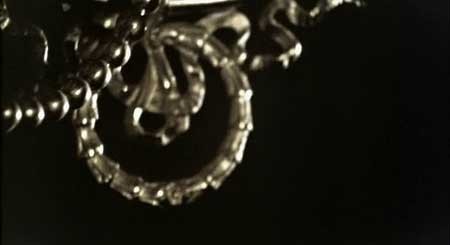 Aside from that, I have mostly positive things to say about Frogs. The acting is not great but it is enjoyable the whole way through. Sam Elliott is good as always. He manages to feel like the outsider while also feeling like part of the group. It makes his role work in ways that it might not work in someone else’s control. Ray Milland is also fairly good as the patriarch of the Crockett family. He personifies that bullheaded “you listen to me because I’m always right” attitude in such a believable manner that you think he is that guy. The rest of the cast isn’t as great as these two, but their lack of good performance only helps to make their deaths more fun to watch. They overact or underact in the perfect ways to make the movie priceless.

The kills themselves are the perfect level of bad to be delicious. The extended nature of them with the overacting helped to put them onto another level of ridiculousness. If there is any reason to watch Frogs, it is definitely the kills in the movie. There isn’t a lot of bloodshed in the movies, but there is a lot of lead up to the demise of every character. Whether it be the guy in the greenhouse being asphyxiated by poison, or the man running from crocodiles and tripping into a swamp, each of the deaths are enjoyable to witness in their long entirety.

But the most important aspect of Frogs isn’t the killing of the people. It is the reason behind the killing. That reasoning can be found in the opening sequence of the movie in which Pickett Smith is taking photographs of the polluted wetland. People aren’t taking care of the world in which they live and the animals are getting revenge because of it. It is a valiant message that many movies have used throughout the history of cinema, and a message that is even more important now than it was in the 1970s. With more people on the planet, technology being so important, and materialism on the minds of the population of first world countries, there is more pollution and garbage than ever. I have to give a movie points for trying to say we should stop polluting so much, even if the movie doesn’t do a great job of saying it. 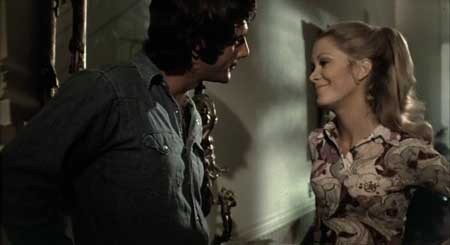 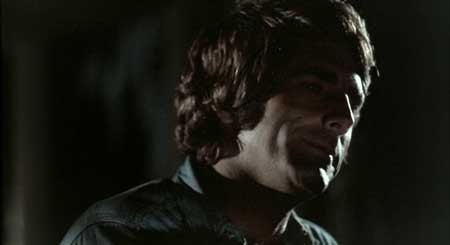 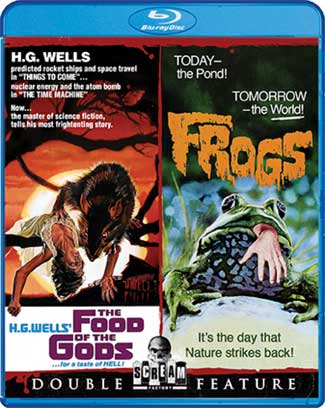 Frogs is a movie with a message, hidden in a movie about animals killing people. It is bad. It is entertaining. It has Sam Elliott without a mustache, and sometimes without a shirt. A man’s man, playing the eye candy role. If you don’t watch Frogs at some point in your life, you are doing a disservice to yourself. You might not like it, I know that. But it is something that is definitely worth your time for at least one viewing. Do yourself a solid and seek it out if you haven’t seen it.

Frogs is now available on bluray per shout Factory