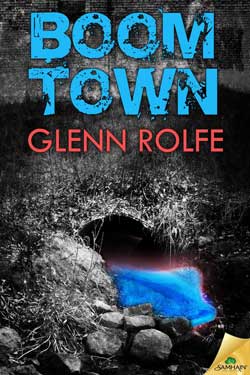 The sleepy town of Eckert, Wisconsin is home to one of the most profound, mysterious UFO sightings in recent history. In 1979 the residents knew not what to make of the unworldly visitation paralyzed in awe as a blue beam blasted from the center of a saucer like craft into Hollars Hill causing the earth to tremor for miles around.

Thirty years later the residents of Eckert are experiencing the formidable tremors once again. Many speculate the quakes are responsible for countless circumstances gone awry. When two adolescents discover a dislodged water pipe behind Packard’s Market and an ominous ooze leaking around its circumference the true beginning of the end is unleashed.

Boom Town marks the second reading adventure I’ve taken with author Glenn Rolfe. I’m tremendously impressed with this writer’s talent and diversity. While many aspiring or new wordsmiths tend to gravitate towards the same subject material or genre Rolfe demonstrates he’s far from a one trick pony and flexes his ingenuity, creativity and diversity all in one swoop. While Abram’s Bridge (also by Rolfe) was one of my favorite reads of 2015 thus far, a most spooky ghost tale with an original slant, Boom Town is in close contention as we have a look at how a small town of Eckert copes with an extraterrestrial invasion.

One of the early components I’d noted about this author’s work is his homage to contemporary cultural references that will no question draw a large audience together in relation. Making mention of such horror icons as Michael Myers and Stephen King breaks the ice in the reader’s imagination and instantly develops rapport. As the plot begins the escalate and we get to know the characters one cannot deny the vicarious state of reminiscing in Wrestlemania or the vision of breath taking model Cindy Crawford. Rolfe is best advised to proceed with caution however as an over indulgence in dated pop culture references may get lost within a certain demographic in the reading audience. Taken to its extreme the reader may become alienated (no pun intended) with certain aspects and drift in an already limited attention spanned society. Overall I believe Glenn has a firm grasp on what works and doesn’t at any rate and think it’s a non-issue as is.

I’m increasingly impressed with the formidable talent released from Samhain Publishing. In my own, personal recreational reading I tend not to gravitate towards a specific publishing house, more accurately a certain author will strike my fancy. The fine folks at Samhain have managed to break the barrier in limiting readers to one specific author in the genre of horror and suspense. The repertoire of gifted writers seems to know no bounds. The clever marketing campaign behind each release spawns excitement and attention and I must admit even the cover art is most impressive.

Getting back to Boom Town, one of the initial noteworthy observations was Rolfe’s uncanny ability to depict each of the body’s senses in his descriptions. Far too often a third person narrative limits the action to strictly sight or touch. When this author paints a mental picture he embodies full perception, placing the reader directly into the fray of carnage. Sight, sound, taste and even smell are highlighted with vivid grandiose. One particular reference to an exhumed unearthly specimen smelling like boiled eggs had my lunch lurching in my stomach, begging for release. Descriptions of the alien organic matter inspired further revulsion making even the most hardened of readers to grapple with their skin crawling unease.

Without divulging in too many plot spoilers I will mention the scenes with telekinetic vision from the alien hosts is the sort of stuff that inspires spine tingling episodes of The Twilight Zone or The Outer Limits.

A final act unfolds that demonstrates author Glenn Rolfe’s fearless endeavors in breaking free from the cookie cutter mold of genre writing and isn’t afraid to dispose of characters we cannot possibly predict. I believe this author is destined for a brilliant future in whatever subgenre he decides to embark upon next. I for one will be thrilled and honored to take that ride any time. 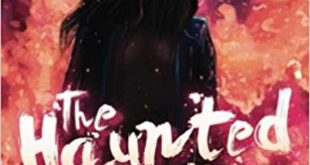