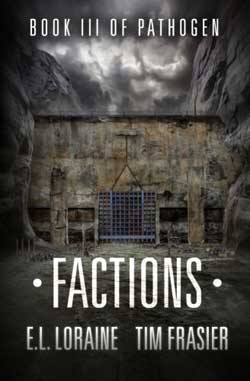 Synopsis-Almost a year after the events of the first book the world is in shambles. Lexy and her group of fellow survivors continue to fight to stay alive as several factions begin to pop up all around them. The thing is though, some of these factions are made up of people worse than the zombies and the mutated creatures threatening the world combined.

Reviewer’s Note-In my review of Mutations, which was book 2 of the Pathogen series I made a mistake and stated that the third book was the last novel in the entire series but I was wrong. I don’t know why I was thinking there were only 3 books in the series but there is actually another one coming out soon. Just wanted to make that clear.

I’ve really enjoyed the Pathogen book series so far, but without a doubt the latest installment-Factions, has been my favorite. It is action-packed, interesting, well-written, and has an awesome cliffhanger ending that left me wanting more (I can’t wait to get my hands on the next part so I can find out what is going to happen next). As usual Loraine and Frasier have delivered a winner and this book was extremely hard for me to put down after I started reading it (as was the case with the other books in the series as well).

This time around Loraine and Frasier focus more on the different factions of people that have come together in response to the deadly outbreak that has changed the world forever. In addition to our main group of characters (that includes Lexy, Jackson, and the others) new groups and even some new characters are introduced in this book. We have the evil group led by Banyan (who is essentially the villain of the entire series) and his psychotic wife (who pretty much gets off on killing people), A group that Harrison (who is probably my favorite character now after reading this installment) and his sister Sherry end up joining, and a faction headed by sex-crazed, totally bat shit crazy former Mormon woman who is obsessed with wiping all the mutated people and creatures off the face of the planet (oh, and she also believes that she can pass along immunity to the virus that has caused all the problems in the world to others by having sex with them). I thought that each of these groups were equally interesting and I can’t wait to see what Loraine and Frasier has in store for each of them.

I also liked the fact that the shit really started to hit the fan this time around (especially in the final pages when something hardcore takes place that shakes things up dramatically). A few important people die this time out and while I wasn’t too upset to lose one of them (as the person was a little useless if you ask me) I hated that one of my favorites had to perish (or does he?) as the novel progressed. I’m thinking that these deaths may be a sign of things to come in the next novel and I can’t help but wonder who is going to be left standing when everything is said and done as it is pretty obvious to me that no one is safe.

There are some new mutations in Factions and most of them are pretty cool. We get some mutant reptiles (that are hardcore violent and enjoy tearing people to shreds), some vicious squid-like creatures, and a swarm of killer mutant hornets that make the rattlesnakes from the previous book seem pretty tame in comparison (which is saying something at those bastards were terrifying). There are even some mysterious parasite-like organisms that can control humans by attaching themselves to their bodies and if I had to guess they are going to play a pretty crucial part in the next book. Of course the zombies were still present and still pose a threat to everyone as well, and there is a very awesome scene that involves Banyan setting a group of them loose on some people that he feels deserved to be punished. Needless to say there are some excellent creatures in this book that cause our heroes more than a little trouble and I’m curious to see what kind of creature (or creatures) is going to make an appearance in the next installment.

As with the other books in the series the writing is top-notch. Both Loraine and Frasier are gifted writers and do a great job of grabbing and holding the reader’s attention. I really enjoy their writing styles and think that they mesh well together. I have really dug their work together so far and hope that they continue to collaborate on other projects in the future after the Pathogen series has concluded as they truly are a great team.

In short Factions kicks all sorts of ass and is the best book in the series so far in my opinion. I can’t wait to find out how everything is going to turn out in the end and I am counting the days until the next part of the story is released. I have a feeling that things are only going to get more interesting and that everything is going to end with a huge bang that will really knock my socks off. Do yourself a favor and check out this book (as well as the entire series) as soon as you can and be prepared to be amazed.