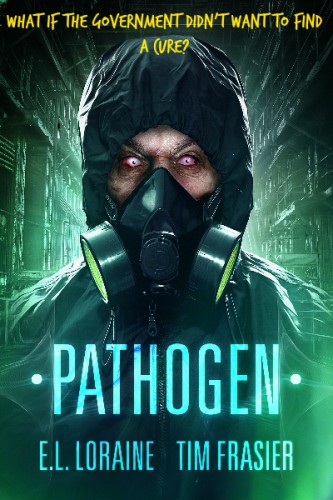 A scientist named Lexy and a group of survivors struggle to stay alive during a zombie outbreak. What caused the outbreak and why doesn’t the government seem to want a cure? Will Lexy and her cohorts discover the answers to these questions before it’s too late?

I read Timothy Frasier’s book Dark Frequencies a few months ago and absolutely loved it so I was eager to check out some more of his work. I was excited when I got my copy of Pathogen (which he co-wrote with the equally awesome and talented E.L. Loraine) in the mail a little while ago and couldn’t wait to read it. I went into it hoping for the best and I can honestly say that Pathogen is without a doubt the best book that I have read so far this year. It is well-written, has a great plot, wonderful characters, and is just very hard to put down once you start reading it. This is book one in a trilogy and if the entire series is as excellent as the first part was then I think I (as well as readers everywhere) am in for a real treat.

One of the things that I really liked about the book was the premise. It’s really hard these days to do anything different with zombies but Loraine and Frasier manage to pull it off perfectly. Yes, there are zombies running around eating everyone in sight but what makes these zombies unique is the fact that their bites have a different effect on people. Some people that are bitten become brainless zombies that only want to attack and eat people while others keep their humanity afterward and actually benefit from the bite. For instance, there is one character that is bitten and he seems to become younger and stronger. A young boy is bitten by a zombie baby (which I thought was a cool touch) and becomes older and smarter to the point that he is basically a technological genius. I thought that incorporating this element into the novel was a great and original idea that just kicks all sorts of ass in general. It was nice to see someone try something a little different with zombies for a change and it added to my overall enjoyment of the book.

If you ask me probably the most important thing about a book or movie is its characters, and Pathogen definitely has some great ones. Loraine and Frasier do a great job of creating some awesome and realistic characters that you care about and you can’t help but root for them as you are reading the novel. The main character Lexy is smart and attractive and is anything but helpless as she can take care of herself in a jam. It was refreshing to see such a strong, independent woman as the main character that doesn’t have to be constantly rescued by the males who appear in the book as she is basically the hero of the story if you ask me. I also really liked Jackson as well and enjoyed his romantic relationship with Lexy (which gets a little strained at one point when she discovers that his job is to help create viruses for the military while hers is to stop them)as it comes off as realistic and isn’t over the top or forced in any way. There are a lot of other great characters too but my favorite is without a doubt Sanchez as he is just a fun and cool character that becomes a total badass by the book’s end thanks to the fact that he is bitten at one point. He was my favorite from the first time that we meet him and his interactions with his military buddy Rico (who is also a fantastic character) are priceless. All in all I liked all of the characters from the book (with the exception of Windows which makes sense since he is an evil prick) and hope that they are all alive and well by the time that the series comes to an end.

I also liked the fact that the book has a bit of mystery to it. We don’t know exactly where the virus that causes the zombie outbreak came from (though it is hinted at several times) and I look forward to getting all of the answers in the future. I thought that hinting that the government was responsible for it was a nice touch and the possible reason for it as stated by a certain character (who may or may not have been telling the truth) was nothing short of brilliant. I have a feeling that one of the members of Lexy’s group of survivors isn’t being completely honest and knows a lot more about the origin of the virus than he’s letting on but we’ll just have to wait and see. I’m sure that I am not going to be let down in the least when everything is finally revealed as I know it will be awesome and Loraine and Frasier aren’t going to let us down in the very least.

Pathogen is an exceptional novel and just all together a fun read. As I said earlier it is very hard to put it down once you start it and Loraine and Frasier should be proud. I dig the book so much that I have actually agreed to write the screenplay version of it so that should show you how much I enjoyed it. If you are into zombies and you want to read an excellent book that goes in a little different direction with them then I highly recommend you grab a copy of Pathogen as soon as possible. You won’t be disappointed. I can’t wait for the next installments of the story.