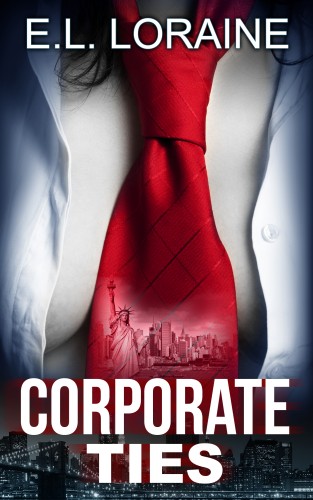 Olivia has been given her first major assignment at her job with Dolby Inc, and that is to acquire Matasuki International as a customer. She’s up to the task as she is a very smart and talented person, but unfortunately there is something shady going on with Matasuki. It seems as though a lot of people who are associated with them end up dead and it isn’t long before a friend of hers that is looking into the company for her ends up missing as well. As she gets closer and closer to the truth behind the company she finds herself in terrible danger. Will she get to the bottom of things before it’s too late or is she destined to be yet another victim of Matasuki and its mysterious owner Isamu?

I am a big fan of E.L. Loraine’s work and think that she is one of the best writers out there today. I loved the Pathogen series that she co-wrote with the equally talented Tim Frasier (can’t wait for the last book of that particular series!) and think that Corporate Ties is just as awesome. While it isn’t really a horror novel and is more of a suspense/thriller I still thought that it kicked all sorts of ass and I had a very hard time putting it down after I started reading it as I thought that it was very compelling and just an all around great read in general (I liked it so much in fact that I have agreed to actually write it as a screenplay in the very near future). As with her other books Loraine definitely delivers this time around and I think that a lot of other readers will agree as well.

Without a doubt the best thing about this book is the main character Olivia. She is just an excellent character in every possible way and you just can’t help but like her. She’s realistic, smart, and beautiful and is without a doubt one of the strongest female protagonists that have come around in a very long time. This girl can take care of herself in a bind and isn’t just some helpless damsel in distress by any stretch of the imagination. Not only can she give her male counterparts at work a run for their money but she can definitely take care of herself in a physical altercation as she does at one point when she is attacked in an elevator by a female assassin (though I wish the fight had gone on a little bit longer and had been a tad more brutal). She’s a very sexual person and doesn’t mind getting down and dirty (and boy do I mean dirty with a few men during the course of the novel (the parts with her and Brian-the head of a security company she hires to find out the truth behind Matasuki Inc and primary love interest-are pretty damn steamy if I do say so myself) and any reader that is into erotic fiction will without a doubt be very, very happy with the results. While there are some other very interesting characters in the book as well (such as Brian and the corrupt and dangerous Isamu) Olivia is without a doubt the best character and I hope Loraine does some more books in the future with her in them as I don’t think that all of her story has been told with this novel. If you are looking for a strong, independent female character then Olivia is definitely the one for you!

I also really enjoyed the plot too. While ordinarily I am not really into books of this nature I was surprised by how quickly I got into the story (thanks primarily to the fact that Loraine is that great of a writer). There are a lot of twists and turns that take place throughout the book that keep you guessing and I was surprised by how a few things turn out once everything is said and done. Loraine does a good job of building suspense and I had a blast trying to figure out what was going to happen next. This book will totally keep you on your toes and by the time I finished reading it I was wanting more (which is the highest compliment I can give to any book or movie by the way). Corporate Ties is a definite page-turner and is one of the best books that I have read so far this year. I think that if you pick up a copy you will agree with me.

Corporate Ties is a winner. I dug the hell out of it and thought that it was pretty much flawless in a lot of ways. The writing is excellent, the characters are awesome, and it has a very interesting plot. What more do you need out of a book? What are you waiting for, go out now and pick up a copy. You can thank me later.