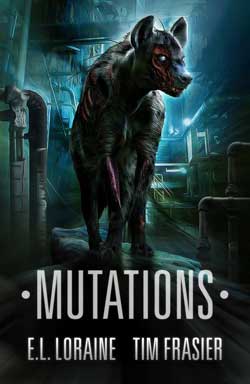 Picking up where Pathogen ended, Mutations continues the story of Lexy and her group of survivors as they try to stay alive after the zombie outbreak. This time though they not only have to worry about all the zombies trying to eat them but also the evil government agency trying to hunt them down and the mutated creatures that were created thanks to the mysterious virus. With the help of a couple of new friends they run across (including a friendly mutated dog) they set out to try to stop things from getting worse than they already are, fix all the damage that has been done, and just survive to see another day in general.

I really dug Pathogen and was very happy when I got my hands on the follow-up novel Mutations recently. I thought that it was a very good read and it is just as good-if not better-than its predecessor. There is a lot of cool stuff going on in this book and I think that Loraine and Frasier are on the right track in regards to putting together one hell of an awesome book series that many readers are going to really enjoy. Just like Pathogen, Mutations is expertly written, exciting, intriguing, and just an all around fun book that is hard to put down once you start reading it.

One of the things that I really liked about the book was the inclusion of the different mutated creatures that Lexy and the gang have to worry about. We get a snake-like woman, little kids that are slowly rotting, some hardcore and creepy ass mutant rattlesnakes (that cause all sorts of trouble for the people that they come across), and a mysterious beast known only as “The Guardian.” Of course my favorite mutation that shows up is Wiley, a mutated dog that quickly becomes part of Lexy’s group. In addition to all these new creatures one of the existing characters from the first book also becomes mutated during this installment (I’m not going to say who it is because you have to read this book to find out for yourself) and I am curious as to what the authors have in store for this character in the future. These mutants are pretty cool (and dangerous) and I thought that they were all a nice addition to the series. The zombies are still a threat to everyone but in a lot of ways some of these mutant creatures pose an even bigger problem for Lexy and her fellow survivors (especially those rattlesnakes, I definitely wouldn’t want to have to take one of them on if I didn’t have to do so).

I also enjoyed the fact that several new characters are introduced in this book as well. In addition to Wiley we get a Native American woman named Sarah whose entire family and village was destroyed thanks to the outbreak (and who becomes a potential love interest for Rico which is cool because I think he needed one), Tamara and Tang, two survivors who end up joining the group, and Lexy’s parents. There is also a new villain thrown into the mix as well, an evil little bastard named Meyers that I can’t wait to get what is coming to him. Harrison, the character that appeared toward the end of the first novel that may or may not be a good guy is also present in this book and we get to see a lot more of him this time around (as well as his sister Sherry who he has a bizarre relationship with). Of course the main group of survivors including Lexy, Jackson, Sanchez and the others are all present and accounted for as well and it was fun to see some of them go through drastic changes and face a number of different challenges as they struggle to stay alive.

I was really into Mutations and can’t wait for the final book in the series so I can find out how everything plays out in the end. This book gives us a couple of more clues as to the origins of the virus and the people responsible for unleashing it on the world and I’m very curious as to how Loraine and Frasier are going to end things in the upcoming finale entitled Factions (especially since Mutations ends with a sort of cliffhanger). Will Lexy and the others (as well as all of us readers) finally get all the answers they are looking for and find a way to set everything right? I don’t know but I am dying to find out. Check out this book (as well as the first part, Pathogen) as soon as you can and hold on tight. You are in for one hell of a great ride.