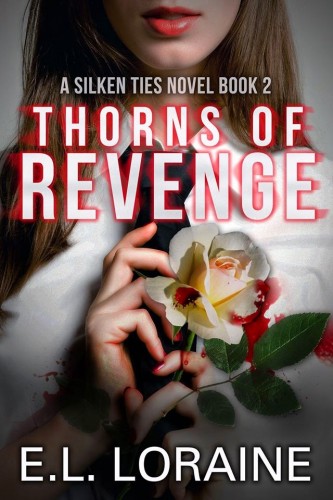 Things seem to be going well for Olivia since taking down the evil and shady businessman Isamu Matasuki and taking over his company. She ends up selling Matasuki International to focus on a new business with her lover Brian and some of her best friends and she couldn’t be happier. Unfortunately someone connected with Mataskui comes looking for revenge and it isn’t long before Olivia and her friends find themselves in a very dangerous situation that they may not survive.

I loved the first book in E.L. Loraine’s Silken Ties series Corporate Ties and thought that the follow up, Thorns of Revenge was equally impressive.  As soon as I finished reading the first book I was curious as to what was going to happen next and found myself wanting more. Thankfully I didn’t have to wait too long for the next part of the story and I am happy to report that it delivers on every level. I had a great time reading this book and thought that it had a little bit of something for everyone. To be honest I liked it so much I am torn at the moment as to which book I liked the best. While I was really into Corporate Ties and thought that it was a well-written novel that did a good job of introducing us to all the main characters and setting the stage for what was to come I think that I liked Thorns of Revenge just a little bit better. Both books are quite awesome in their own way and if you haven’t checked them out yet you really did to do yourself a favor and do so because you are really missing out.

One of the things that I really enjoyed about Thorns of Revenge was the fact that it focuses more on other characters other than just Olivia. She’s in it and I love the character but it is almost like she takes a back seat this time around so that we can get to know her friends Rachel and Lucy a little better. Both characters are in the first book briefly but they really aren’t that fleshed out very much and are just basically Olivia’s friends. This time around though they both have a little more personality and I dug both of them as I thought that they were just great characters in general. I don’t want to give away what happens to them but let’s just say that they are placed in one hell of a bad situation and it is fun watching them struggle to survive. They both prove that they are strong, interesting characters in this book and not just side characters that aren’t anything special. I liked that Loraine choice to focus more on them as opposed to Olivia for this outing and I thought that it worked. Don’t get me wrong, Olivia is a great character and we see a lot of her in this book as well but I thought that it was a nice touch to take a closer look at some of the other characters that really didn’t do a whole lot in the previous installment. Loraine has a knack for creating likable, realistic characters and I think she really outdid herself this time around.

I also dug the premise too. I don’t want to spoil anything but let’s just say that someone has it out for Olivia and doesn’t have a problem hurting those closest to her to get at her. I like the idea behind what the person does to gain revenge and thought that the identity of the person was pretty cool too (especially when we find out how the person is connected to Matasuki, something that I didn’t see coming). The person seeking revenge doesn’t want to merely kill Olivia as that would be way too easy and instead decides to make her suffer as much as possible. While it isn’t a horror novel it does have some pretty damn suspenseful moments and a ton of tension as we wonder if some of our favorite characters are going to make it out alive by the time everything is said and done. There is a nice little surprise toward the end concerning one of the major characters that appeared in the first book that I thought was pretty cool and I think that many readers will agree. If you’re looking for a well-written book with an awesome premise and all sorts of twists and turns then Thorns of Revenge is definitely for you.

I have always been a fan of Loraine’s writing style and think that she is an amazing storyteller. It is hard to put down any book that she has written and Thorns of Revenge is no exception. She does a great job of telling a story without going overboard with unnecessary subplots and plot twists, and there is just something about her writing that has always appealed to me. She is without a doubt one hell of a writer that has a lot of range and talent and she has quickly become one of my personal favorites. She has a gift for creating strong female characters that you care about and want to root for, and I am really looking forward to what she has for us next.

Thorns of Revenge is a great book and one that I highly recommend. It is a great companion to Corporate Ties and I can say that Loraine has done an awesome job creating an intriguing universe with some equally intriguing characters. The sex is toned down quite a bit in this installment as opposed to the first book and while some readers may disagree I thought that it was the right choice (not that I had any problem with all the sex in Corporate Ties but the lack of it this time around worked and helped the book flow just a tad bit better in my opinion). Grab a copy of this book when you can, you won’t be disappointed, especially if you are a fan of the first novel.