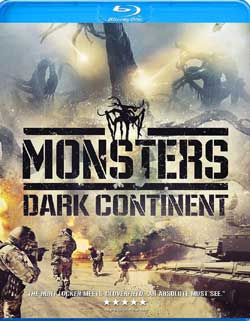 Johnny Harris (Snow White and the Huntsman, The Imaginarium of Doctor Parnassus) and Joe Dempsie (HBO’s “Game of Thrones”) star in Monsters: Dark Continent, the epic sequel to the 2010 breakout hit Monsters, arriving on Blu-ray™ and DVD June 2 from Anchor Bay Entertainment and RADiUS. Helmed by first-time feature film director Tom Green, the film also stars Sofia Boutella (StreetDance 2, Kingsman: The Secret Service) and Sam Keeley (This Must Be the Place, What Richard Did). The film is executive produced by Gareth Edwards (upcoming: Star Wars Anthology: Rogue One), director of the original Monsters and 2014’s Godzilla.

Taking place 10 years after the events of its predecessor, Monsters: Dark Continent is set against the backdrop of a world proliferated by “Infected Zones.” An insurgency of fearsome monsters lord over these regions and threaten humanity. The film follows four fresh army recruits as they embark on a life-altering mission in the Middle East, through the heart of monster territory to save a group of fellow soldiers.

Including a behind-the-scenes featurette that will transport viewers to the set of the film, Monsters: Dark Continent Blu-ray™ and DVD will be available for the suggested retail price of $26.99 and $22.98, respectively.