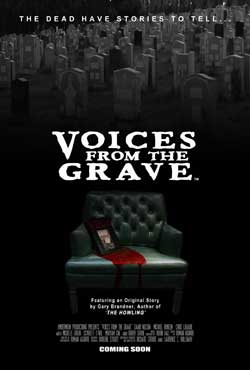 The dead have stories to tell a horror fan seeking the obscure.

An anthology horror film by Richard Stoudt (Death By VHS) and Laurence Holloway (Nightmare Alley), VOICES FROM THE GRAVE presents three compelling short tales held together with a wrap-around story.

Our story begins in a book shop. The nameless customer (although named in the closing credits, and played by Bobby Shook) engages the shop keeper (Scarlet Fry) in a discussion on horror fiction. After the shopkeeper recommends a few known authors – Stephen King, HP Lovecraft – the customer says he wants something a bit more obscure. Purusing the horror section, a book falls off the shelf. Intriqued, the customer sits down to give it a quick look.

This leads to our first tale, ALL HALLOWS EVE, written by Mr. Stoudt and Joe Evans. As the title would suggest, it is Halloween night. Lynda (Michelle Green) is throwing her annual bash. Her best friend Robert (David Nelson) is not having a very good time. His younger brother Vince (Sean Ryan McBride) has tagged along to the party, drank too much, and is generally making a fool of himself. 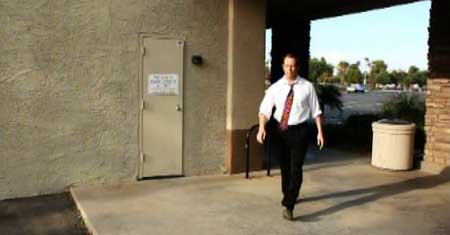 Vince asks Robert to give him a ride home, but is instead given a lecture about how he’s ruining the night for everyone. Robert hands Vince the car keys and a jack o’lantern “to protect him” and tells him he’s on his own.

Vince is killed in a car accident trying to get home.

The story picks up three years later, and Robert has never gotten over the guilt of what he allowed to happen. Robert has pretty much abandoned all Halloween related festivties since that night, despite Lynda trying to get him to come back to her bash. Instead, Robert spends the evening at home drinking beer and watching the annual horror movie marathon on local tv, hosted by a character called Guy Marks (Andrew Presler).

He doesn’t decorate or give out candy, so every year his house gets nailed by pranksters. But this year, he’s got a much bigger problem. 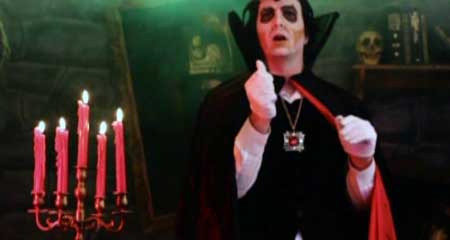 The second tale is called INVITATION, based on the short story “Mark of the Loser” written by the late Gary Brandner (creator of The Howling). We meet businessman Len (Michael Hanelin), on his last night in the small town of Wildwood. Len came here to set up a new office for the company he works for, and had every intention of maybe staying for the duration. But he finds the townspeople cold and unfriendly, and has made only one friend in the whole time he has been there. He spends a few hours at the local bar with Pete (Jonathan Medina) before heading back to his hotel for one last sleep in this “god forsaken town”.

Len gets to his car and finds an invitation to a party, ambiguously signed by the host only as “W”. Len figures it’s better than watching tv alone in his hotel room, so he decides to accept the invitation.

He arrives at a lively c**ktail party. Everyone is very friendly, and they all seem to know his name. But he has no idea who any of these people are. And every time he asks to meet the host, he is distracted by the other guests. Then there is a beautiful woman with blonde hair (Sarah Masters) who keeps popping up in his periphery but disappearing before he can speak to her. 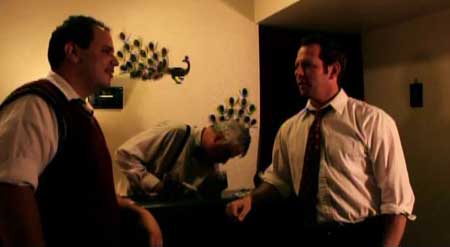 As he becomes acquainted with the other guests, Len keeps asking who she is. Again, they simply re-direct his attention to something else. A very strange c**ktail party, indeed. And who exactly is the host?

The last story is REPOSSESSED, written by Mr. Stoudt. Jeff (Chris Labadie) is a broke slacker. He takes his girlfriend Cathy (Maryam Cne’) on dates using public transit. How romantic. But he’s saving up his money to buy a car, and he won’t settle for just any POS.

He happens by a car with a “for sale” sign in the window – a totally cherry 1986 Corvette. The asking price is 700 dollars. Too good to be true? He calls the number and arranges to meet with the seller, Eddie (James Leatherman).

Jeff gets his mechanic friend Devin (Corey Henderson) to drive him out for the meeting. Jeff finds Eddie a bit odd, but the price is right and the car is awesome, so he buys it.

That’s when the weird stuff starts to happen. The car seems to have a mind of it’s own. But is that even possible? 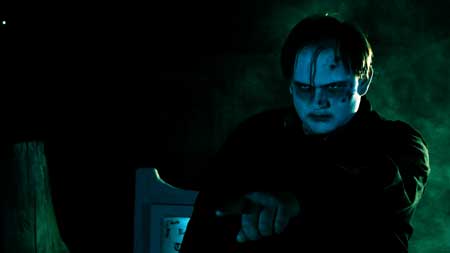 This film was made for a budget of 10,000 dollars, and I love a low-budget film. This one has the feel of the old horror anthologies from tv like Tales from the Darkside or Monsters. Even though this is a new film, it has a feeling of nostalgia to it.

Special effects are very minimal. The sound mix is pretty awful. But what really makes a film like this is how good the stories are. All three tales are good, if a little predictable. Totally worth the time to watch.

On a scale of one to ten, ten being awesome, I’m giving this film 6 books.