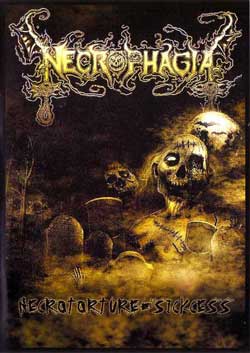 “Shockumentary” where Fred Vogel of ToeTag Pictures follows the band Necrophagia on their European Tour.

Necrophagia (a name which, in case you weren’t sure, does indeed reference the act of eating a corpse) has been a band longer than some of you have been alive. They started playing music in Ohio in 1983. That’s the same year as Death started, and a year before bands like Morbid Angel and Obituary started growling into the microphone. Suffice it to say, while not being one of the most famous, this definitely makes Necrophagia one of the very first death metal bands. And they’re still creeping today, having just released their most recent record, WhiteWorm Cathedral, in October of 2014. They’ve also established a working relationship with some of the nastiest horror directors around, and that brings us to their 2004 home video release, Necrophagia: Sickcess. 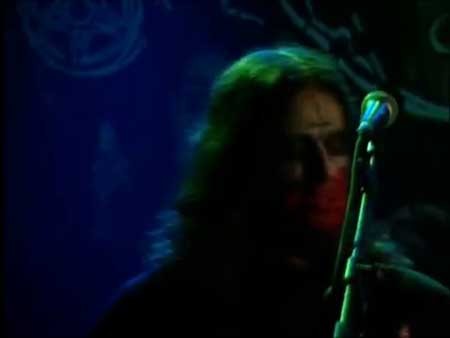 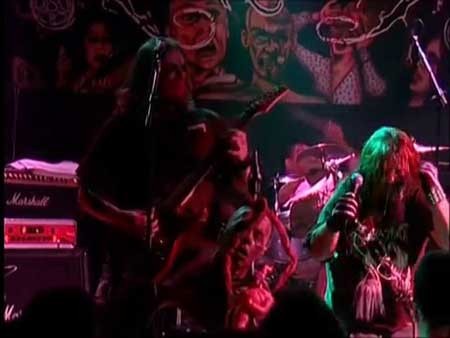 A quick note to horror movie fans: while Necrophagia has plenty of songs in their set about horror movies, this specific movie is mostly just a live concert video of a show they played in April of 2003. They do, however, have a couple other videos that include horror film clips/videos directed by the likes of Vince D’Amato (Human Nature), Ryan Nicholson (Collar), Jim Van Bebber (Deadbeat at Dawn), and Fred Vogel (August Underground). So if you’re looking for horrific images to go along with your death metal, check out either Necrophagia: Through Eyes of the Dead (2000) or Necrophagia: Nightmare Scenarios (2004). If you’re here for the metal, then you’ll enjoy Necrophagia: Sickcess just fine.

Necrophagia puts on a pretty tight show. They’d probably be best described as a death metal band with a penchant for horror. They fall more into the straight forward range of death metal bands, not overly technical, mostly mid-tempo with the occasional thrash beat; you will not be attacked with a barrage of blast beats by this band. The singer, Killjoy, has a growling voice that is more leopard than bear (not super deep and growling), with a random touch of balck metal thrown in here and there. The band has a keyboard/synth/sampler guy to go along with the usual drums/bass/guitar line-up, and I think that aspect actually helps them achieve a slightly different sound than many of their peers, as well as adding a bit to the creepy factor they are obviously going for. 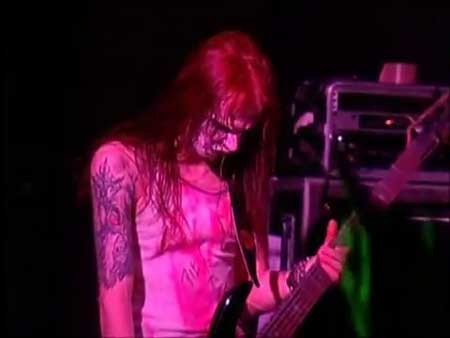 Many of their songs are about or inspired by horror movies. Some title examples from this particular set include “Cannibal Holocaust,” “Burning Moon Sickness,” “Flowers of Flesh and Blood,” and “Blood Freak,” to name a few. Between songs, Killjoy introduces the songs with macabre descriptions, chants “Fulci lives,” and even promotes August Underground as the new face of horror. He even dedicates a song during the encore to the late Euronymous of Mayhem fame (also known as the murder victim of Varg Vikernes). The crowd seems bored for most of the set, but I’m not sure why. If nothing else, Necrophagia certainly entertains.

Early on in the performance, a man is led onto the stage, bound and gagged. He is pushed into a chair near the drum set, then a large, hulking fellow, The Butcher, proceeds to pound his head with a hammer. And there he sits, “unconscious” while the band plays around him, until just before the end of the set when The Butcher comes back out. Inspired by the crowd chants of “Kill,” the Butcher rips open the man’s stomach, pulls out his guts, and parades around the stage proudly. That’s pretty much the horror aspect of this movie; Gwar they are not, but they are definitely having fun. 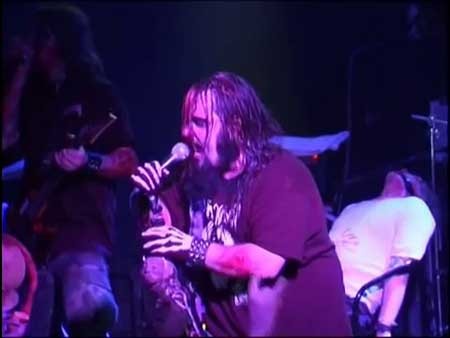 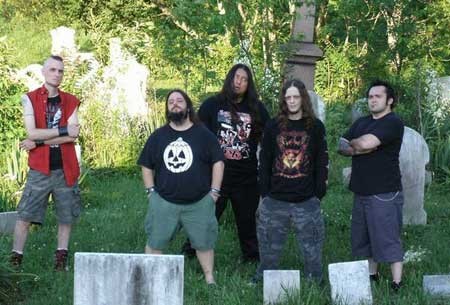 Necrophagia: Sickcess is your typical death metal home video release. They fit around fourteen or so songs into their set, lasting just over an hour. There are multiple camera angles, which is definitely appreciated, so we get to see a variety of shots of each costumed or made-up band member playing their respective instruments on stage. If you enjoy death metal, especially an older style of the genre, then you’ll probably enjoy this video. As I mentioned, it’s more for the music lovers than the horror movie fans, but I was not very familiar with the band before watching, and I was still able to enjoy it.