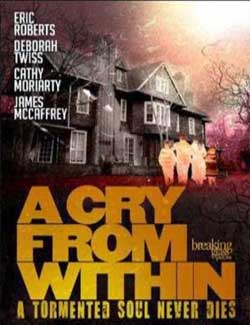 Overcoming the heartache and tragic loss of a child a family relocates from New York City to the country. The house they’ve chosen soon begins to reveal a most ominous presence. Will the apparition get their new cohabitants to hear their Cry From Within?

A special commendation should be given to Ms. Deborah Twiss who not only wrote the story of A Cry Within (aka Sebastien) but also co-produced, co-directed and starred in one of the leading roles as Cecile. Her onscreen presence exudes exotic beauty and will have testosterone fuelled fans salivate over her voluptuous psyche and raw, sultry sensuality. It’s obvious her level of passion towards the project. An entity capable of adapting so many roles in a production is a most certifiable force to be reckoned with in the horror realm.

The characters are likeable from the get go and share an affectionate endearment towards one another we can all live vicariously through. We, as the audience admire the love, support and encouragement they have for one another and have a subconscious desire to see them achieve fulfillment and overcome any obstacle that comes their way. At first glimpse the dialogue seems a little too casual yet equates to the informal and mundane levels in which we communicate with those closest to us in our own reality. A great deal of salutation is regarded as simply, ‘hey’ or closing comments repetitively sign off with, ‘cool.’ While it’s far from the sort of memorable dialogue fans will be quoting long after the fact, Twiss seems to have depicted average, ordinary, everyday American families in a manner that is more realistic than we take for granted. As the viewer we instantly become at ease. With our psychological guards down it’s then open season to let the frights begin. 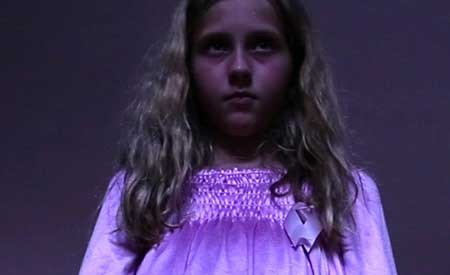 A great deal of innovative shots are captured with special detail to the cinematography department. Panoramic views as well as first person perspective and winding staircases all contribute to placing the viewer directly into the midst of action. We sense the family’s sense of dread and many will writhe within their seats awaiting the next big thrill to be unleashed. Outside shots of the house in the country seem to permeate unholy tendencies. The soundtrack for most part is of orchestral nature which always attributes to a quickened pulse when we least expect it.

For the most part the acting is above par. Eric Roberts (Jonathan) is a B-rated, straight to video king with some hits and some misses. This time out Roberts’ performance strengthens the authenticity of the production. He’s a well-seasoned thespian and those familiar with his work may get a kick out of how gracefully he’s aged. We get behind him as a husband, a father and a therapist. For my money I’d much rather see Eric in any film rather than that other Hollywood Roberts.

The role of Ariel as played by child actress Sydney McCann is creepy as hell. Her fascination with an inanimate doll and gradual descent into sorrow and decay will haunt the nerves of any supernatural genre fan. Whether McCann remains in the industry or not is difficult to say. I think fans of terror should be best advised to keep an eye out for this up and coming star as she may very well adapt the façade of bona fide scream queen one day.

Special effects and editing departments did a smash up job with the ghastly figures. We don’t second guess the validity of their presence. While it may seem a like a great deal of time has lapsed until the initial pay off scene but the wait is well worth it in this case. Exposition and getting to know each of the characters in A Cry From Within is a necessary evil in this case. A couple of involuntary jolts may even ben in your near future once the initial credits roll.

The scenes back and forth between Jonathan, Cecile, their children and Ariel and Morgan and a parallel between Alice (Cathy Moriarity) is a riveting story telling prose. We’re given subtle clues and hints as to how the two are related and gradually peel back the layers in this psychological supernatural twister to determine just how they are in synch. The final climax that is unveiled is equally disturbing and heart breaking.

A Cry From Within was nominated for International Fantasy Film Award.