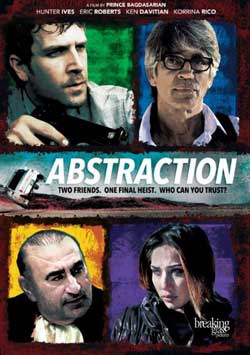 An intense action crime drama revolving around the heist of a half a million dollar painting.

Let me start this review by saying that Eric Roberts has been in a whole lot of stuff over the past few years that nobody cares about or even knows exists. He’s one of those actors who will do any role put in front of them. People might say that about some other, more popular actors, but with Eric Roberts, it is actually true. The other actors are recognized because of the varying quality of their filmography. They have good movies and bad movies and don’t seem to care about the quality. That doesn’t mean to me that they accept any film role put in front of them. With Eric Roberts, the number of films he has been in over the past few years tells me that he truly accepts any role offered to him. In 2013, the year that Abstraction was released, Mr. Roberts had a whopping thirty-three film roles, not including television or short films. That’s almost three films released per month that he had a role in. Big roles, small roles, the guy acted in each of the thirty-three movies. He would have to accept almost any offer to get those numbers.

One of the movies Eric Roberts appeared in was 2013’s Abstraction. He wasn’t the star of the crime thriller though. Abstraction is about Tommy Curson (Hunter Ives) a small time criminal who works with his friends Gary Baysto (Richard Manriquez) and Sean (Sam Puefua) to steal things for other people. When the robbery of a car mechanic shop goes wrong, leading to the deaths of two employees (Eric Roberts, Manu Intiraymi) and the capture of Sean by the police, Tommy and Gary leave the crime business. After Tommy meets his new girlfriend Scarlet (Korrina Rico), the two are brought back in for one last job. That about sums it up without giving away the final third of the movie.

Where Abstraction excels is in the way it twists and turns throughout the story. Most of the twists that come at the audience were predictable, but that didn’t make them any less enjoyable. They suited the movie and made the story feel more cohesive and right. They weren’t out of left field and felt all the more suitable to the movie for it. Usually it would be easy to consider these twists and turns a weakness of the movie. Yet I believe that they only help to strengthen it into the thriller that it is, regardless of knowing or not knowing what was going to happen. They gave the movie energy that helped propel it forward. That aspect is commendable.

Then there are the parts of Abstraction that don’t work as well. As much as I appreciate the story and the turns that it took, some of the dialogue was quite terrible. The acting wasn’t there to support the bad dialogue, causing it to stand out instead of covering it up with a good performance. Don’t get me wrong, the acting was fine for the most part. But in order to support bad dialogue, it needs to be more than fine. The actors really need to sell the dialogue in order to make it work. They didn’t do that and it hurt the movie.

Another weakness of Abstraction was the dropped thread of Sean, the third partner in crime. Sean gets captured during the problematic heist at the beginning of the movie. When Tommy and Gary are brought in for the one last job, Sean is completely forgotten about. No longer do the characters care about him being in jail. They no longer discuss what he might say about them. He is no longer a part of the story. It’s a loose thread in the story that is never resolved in any way whatsoever.

Overall, I found the movie enjoyable. As many weaknesses as I could pick out of it if I sat here for hours and thought about it in some super-duper depth, I still think that there is more to enjoy out of the movie than hate about it. No, it is not flawless. Few movies are. Yes, there are some big problems in the dialogue and writing. Sure, it looks extremely digital and I didn’t even mention it until this point even though that makes it look a little off. There are a lot of problems that you can find in Abstraction. But it’s still a fun enough crime thriller to not feel like a waste of time when you are watching it. It’s fun enough, especially in the final half, that I had a good time watching it. I think there are people out there who will as well. And I hope they see this review.