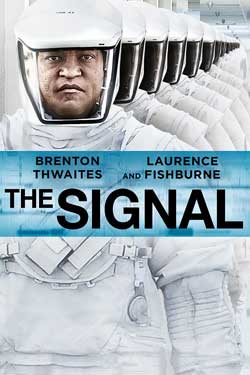 On a road trip, Nic and two friends are drawn to an isolated area by a computer genius. When everything suddenly goes dark, Nic regains consciousness – only to find himself in a waking nightmare.

The Signal, William Eubank’s second stab at directing, poses two common enemies against each in a war older than time itself: the heart over the mind. As human beings, do we strive more for logic, or are we happy to be led by our emotions?

When we first meet our hero, Nic (Brenton Thwaites), he is a friend and a lover, but moreover, he’s a critical thinker. Seeing a child struggle with the complexities of a claw crane, he takes pity on the sprog by giving him a cheat code, so to speak, that will ensure complete success in winning a toy. To Nic, who has muscular dystrophy, life is a logical sequence of events with determined outcomes. Unfortunately for him, it refuses to remain so.

Whilst taking his girlfriend, Hayley (Olivia Cooke), to her college in California, with best friend Jonah (Beau Knapp) in tow, Nic rekindles an online fight with a hacker known as NOMAD. Wanting to have it out with NOMAD in person, Nic and Jonah, much to Hayley’s chagrin, pinpoint where he or she lives. What they find is a dark and abandoned domicile.

Up until this point it seems The Signal is wearing its genre on its sleeve. The spooky house, the kids with cameras… We’ve seen all this before, right? But from out of nowhere the film throws a left hook that leaves you spinning. Upon recovery, we find Nic is confined to a wheelchair in medical center of some kind. With his friends missing and no idea how he got there, the only source of information he has is a doctor in a HAZMAT suit who resides over him, played by Laurence Fishburne. And the shrink-wrapped doctor is more concerned with finding out what Nic knows about NOMAD.

From this point on, The Signal becomes a large logic puzzle as Nic tries to piece together the events that led to his incarceration. This is probably the movie at its least decipherable, as Nic discovers the extent of NOMAD’s influence and Fishburne waxes lyrical about the merits of the humble pen. If this film is about logic over emotion than this the chapter where you need to show your working-outs.

Once we step out of its confines into the larger world, The Signal clocks you again with a right hook. Changing tact again, the film’s emotional side begins to take over. It’s here that Eubank constructs elaborate and engaging set pieces that owe some debt to Neill Blomkamp’s District 9 and pretty much anything by David Lynch, as faceless soldiers go up against machine in a flurry of explosions, whilst Fishburne looks on from the confinement of his suit. Whilst exhilarating to watch, this is probably the point at which The Signal becomes perilously close to unraveling. Having spent a lot of time dropping breadcrumbs for us to follow – one of which is so large it may as well be a loaf of bread – everything comes to a head as Nic’s fate, the truth about NOMAD and the machinations of Fishburne’s superiors are all laid bare.

And whilst the pieces do fit together, I’m not sure I’m completely satisfied with the resolution. It doesn’t jump out of nowhere, but having revealed its goodies, The Signal seems resolutely against doing anything else after the fact. It’s like reading a really good book, thinking the last chapter has been ripped out, but discovering that was the author’s intent. You feel a little cheated.

The Signal, whilst a tad po-faced, is an interesting piece of intelligent sci-fi that lets itself down by asking its audience to accept both too much information and too little explanation in it’s resolution. That may read like a contradiction in terms, but it’s the best way to explain a film that makes you ask ‘but why?’ a bit too much.

So how does this fit in with the theme of heart over mind? Logically, The Signal makes sense. Emotionally, I wanted more.