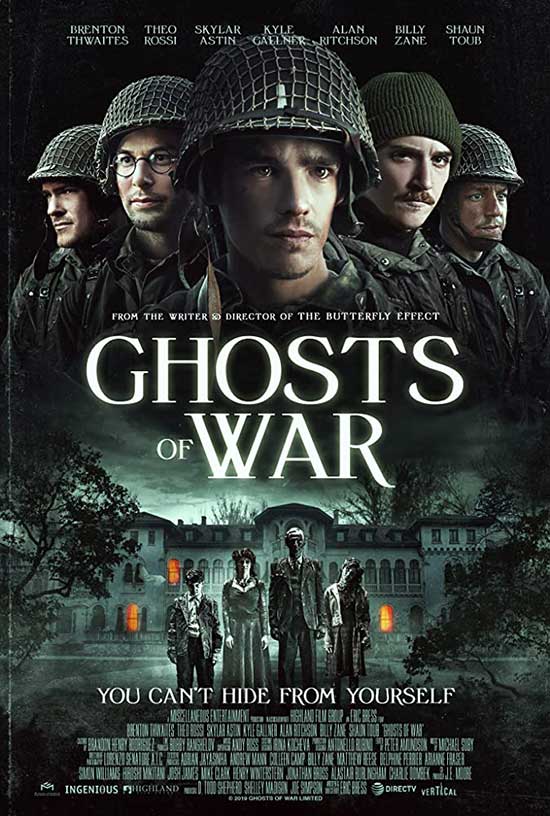 Five American soldiers assigned to hold a French Chateau near the end of World War II. This unexpected respite quickly descends into madness when they encounter a supernatural enemy more terrifying than anything seen on the battlefield.

Review: This film is on Amazon Prime Video currently, at time of writing this. I’m happy to review this film that really made an attempt at being a blockbuster. Brenton Thwaites (“The Giver,” “Gods of Egypt”) is just the younger fame aboard. We even have Billy Zane in the cast! Who can forget him in Titanic and so many other amazing stories like Daredevil. The guy has gotten around! He still looks like one scary dude too I might add. In this oddly told tale of ghosts in WWII however, he’s sort of the voice of reason that explains all the supernatural phenomena going on. Other stars in the film include: Theo Rossi, Kyle Gallner, Skylar Astin, and Alan Ritchson. I enjoyed this film, especially the odd ending but it’s still a B movie by my estimation. Despite the director’s efforts and the “cast of thousands” it makes only a small splash in a genre that’s seen this before. Let me flesh it out for you.

Our director is Eric Bress, also known as writer/director of “The Butterfly Effect.” That’s another intense film that is in the category of suspense but not horror. Some of the images and highly intense scenes in it are reminiscent of “Ghosts of War” but it’s more of a drama. The writing is excellent. This is his strength. I admire any writer who earns the privilege to direct his own work. Bress is one of those directors. But maybe he should have done some films in between? You know, to keep his chops up? “Ghosts of War” has mostly failed with IMDB and Rotten Tomatoes. At the same time it has scored well with RogerEbert.com and random scatterings of reviews on the web. We have war scenes and a war backdrop. After that though, it’s 100% ghost story.

Does it have creepy, scary moments? Not to an extreme degree. Still, much time and expense was put into the soundtrack. The semi-transparent ghosts reminded me of the ones in Guillermo del Toro’s “Devil’s Backbone.” I experienced the “chilling” creepy factor I crave in horror watching the film. A sleepy, foggy atmosphere permeates the film. There is nothing scary here like a jump scare is scary. At the same time, it has that heady feeling that supernatural events are bound to occur, and they do.

Another film that it reminded me of is “Overlord.” That was an amazing film based in WWII. The Nazis has a role similar to those in “Ghosts of War.” It’s a similar walk through that history but there are no frightening scenes that even come close to Overlord in “Ghosts of War.” I think that was intentional. Much has also has been written about the ending. Some are confused by it and some ratchet up the score because they think it’s so good. It is unexpected that’s for sure.

“Overlord” starts with a multi-million dollar effect of being in a WWII bomber parachuting down. I’m afraid of heights so this opening sequence freaks me out every time. To a horror fan, it’s fun to be freaked out. I know you agree right? You won’t see vast scenes like that in “Ghosts of War.”

Cinematography and music make this film much better than its story. I see this film as driven by ambience. The story weaves and the ending really goes a different way. Still, it’s interesting what the director does, I do recommend it for fans of war films, horror, and the actors. Do people still go to see movies because their favorite actors are in them? I do sometimes.

In conclusion, this is no B movie. It has a cast of many famous actors including Billy Zane. It is set in war but the actors and the ghosts make it a universally pleasing horror. It’s highest feature is the creepy ambience. The story is good and the ending twist is excellent. While not perfect, I think you will enjoy this film. I recommend it as a 7/10.