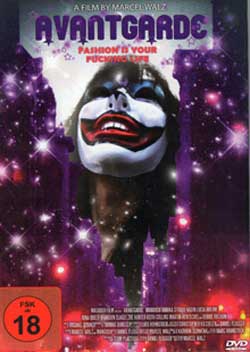 High Society darling and world famous fashion designer Donna Sciavelli knows no boundaries when it comes to new ways of extending her own fame through pleasing her spoiled clients with new “groundbreaking shows, ideas and creations” and New York’s high society follows her blindly – not willing or not capable of realizing the true extent of Donna’s self staging frenzy.

Within the still early career of Marcel Walz, his 2010 film, Avantgarde, stands out as different. Whereas Seed 2 or Klischee pretty much fall into the slasher subgenre, and the two La Petite Mort films are Hostel-style “torture P*rn” films, for lack of a better word, Avantgarde opts for the world of modeling as its setting. This time around, in place of blood and guts, Walz instead gives us a cynical world of no-limits art and a live fast, die young mentality. And while I was not a big fan of it at first, the more I thought about the movie, the more I enjoyed it.

Avantgarde tells the story of Alex (played by Nadin Lucia Brehm), a young girl living in Frankfurt, Germany, who is struggling to become a model. Despite her looks, she’s not landing any jobs. One day, her friend gives her a surprise – a Willy Wonka golden ticket for an audition with Donna Sciavelli (played by Walz film regular, Manoush), one of the top modeling recruiters around. She tries out, then is handed a plane ticket to New York City. Brushing aside warnings of potential danger, Alex flies to the US where she meets Donna and her group of models starts doing some work with them. Very quickly, she realizes that this job isn’t all she had hoped it would be. Turns out this art is a lot more dangerous than she could have ever imagined.

This movie isn’t so much scary as it is bizarre and a little off-putting. From the very first scene involving models, things are already getting weird. There’s a girl named Maddie (Annika Straus, who you may remember as Dominique from the La Petite Mort films – for sure one of the highlights of this movie) posing with a tiny moustache painted on her upper lip, a la that German dictator from the 1940s. Later, she also poses with black tape over her mouth. There are other models, too, sometimes wearing clown masks and carrying what seem to be pink mannequin body parts – D-Monique is played by Zoe Hunter, and Candy is played by the legendary Debbie Rochon. A guy named Angel (played by Keith Collins) walks around in – what else – angel wings. And, of course, there’s Donna Sciavelli herself, the leader of the group, who seems to be a female mash-up of Andy Warhol and James St. James (sidenote: this movie is also known as James St. James Presents Avantgarde, James St. James being the writer of the book Disco Bloodbath, later made into the movie Party Monster, and a big part of the New York City club scene in the early 90’s. His actual connection to this movie is still to be determined).

Avantgarde doesn’t give us a lot of blood and gore. There is a little bit, but most of the nasty stuff is done off camera or only talked about. Instead, it gives us a disturbing scene of a bunch of people trying to push the envelope when it comes to their “art,” looking for new, revolutionary, sensational ways to shock the audience. It reminds me a lot of John Waters’ Female Trouble; interchange Dawn Davenport with Alex and the other models, and flip-flop the Lipstick Beauty Salon and Donna Sciavelli’s modeling agency, and you’ve got two very critical (and funny in their own ways) looks at the world of modeling, both with their own murderous tendencies.

A lot of times, I’ll say that if a movie had been edited and cut down in length a little bit, it probably would have been better. In the case of Avantgarde, I’d actually say the opposite – once the story really starts going, and the audience has bought in on the concept and is really enjoying the ride, it suddenly rushes the end of the story and rolls the credits. The ending gets thrown at your, rapid fire, and I feel like that bungles up an otherwise pretty cool movie. Without giving away spoilers, I would have loved to see the final sequence extended at least another ten minutes to give it the detail and finality it deserved. But, alas, instead we have to settle for what we are given.

This isn’t your run of the mill, German slasher flick, it’s more story and character based (not to mention being set in New York City). There are clips of bizarro fashion shoots and dance/hip-hop music throughout, taking the place of blood, guts, and killers chasing frightened young victims. You get an idea where it might be going fairly early on, but that doesn’t detract from the story because there’s enough depth to it to hold your interest. There are other Marcel Walz films I’d recommend before this one, but this is still a highly recommended addition to your collection. Gore fiends might be disappointed by the lack of extreme carnage on the screen, and based on expectations from a Walz film, I can’t help but understand. However, I sincerely believe that if you’ll just give Avantgarde a chance, I think you’ll agree that it’s a good one.