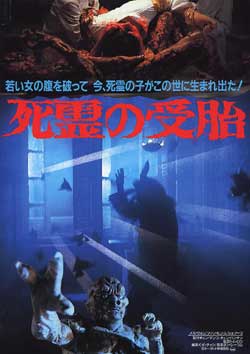 A beautiful model spends the night at a photographer’s place following a lengthy shoot at a Buddhist temple. They both pass out after getting bombed on champagne. During the night, the model is raped and impregnated by a demon – the manifestation of the spirit trapped in a cursed statue that the photographer nabbed from the temple that day. An abortion attempt proves unsuccessful, but she is soon killed in a car accident. Later, as a group of pathologists are examining the body, the fetus emerges and manages to escape. Bodies continue to pile up and it is clear that divine help is needed, so the photographer calls in on his local priest. The demon survives a bungled exorcism attempt, however, and brings to life a legion of the undead in the process.

From the opening sequence onward, The Rape After creeps along an ominous, chilling path through an intoxicating mixture of demonic possession, supernatural terror, and zombie horror. The way directors Meng Hua Ho and Moon-Tong Lau (who also scripted) weave so many elements together without disrupting the eerie mood for the duration of the film is impressive. The tone is never compromised by goofy humor either, as is often the case with even the nastiest Hong Kong Category III films. The film is loaded with horrific imagery, yet doesn’t leave an unpleasant aftertaste – despite the expectations immediately created by the weird title, reeking as it does of tasteless exploitation.

The film would indeed have benefitted from a different title, as the sexual element is for the most part downplayed. Viewers expecting the kind of nonconsensual depravity typical of Category III, like the improvised chopstick holder in The Untold Story or the necrophilic nestling of Dr. Lamb, will probably demand their yuan back. Having said that, The Rape After is by no means a date movie – while much of the violence seems restrained in the current climate (the film is three decades old, after all), it received its restrictive rating for a reason. Demon rape, deformed kids, burnt bodies, decayed corpses, dead fetuses, severed fingers, buckets of vomit, a climactic zombie chow down – there is plenty here to offend audiences not accustomed to the average gorefest.

The film retains an air of sophistication, however, in the way that it rarely dwells excessively on the gore; the finely tuned creepiness is never neglected in favor of wall-to-wall splatter. At times, this even has the effect of strengthening the impression made by some of the more violent images, where the stab of a brief image can carry more impact than an extended sequence that allows you time to acclimatize. Whether you find this approach rewarding will depend on whether you’re in the mood for a roller coaster ride or a slow-burn chiller. Even the sound effects are quite subtle; in a scene where a possessed woman dicing vegetables fails to notice that she has begun chopping off the ends of her own fingers, the sounds are realistically muted – by comparison, if this were a Japanese production, it would sound more like the branches of a tree being lopped off.

The department in which The Rape After scores major points is atmosphere. Eerie lighting and moody music amplify the tension considerably, often bringing to mind classic Italian horror of the period – particularly Lucio Fulci’s masterpiece of gore and the supernatural, The Beyond (1981). Using animals as instruments of evil, for example, is a technique often milked by Fulci; here people are beset upon by crazed birds and voracious rats, and a sick man is induced by a priest to disgorge live frogs during an exorcism. This concept of nature rebelling against the human element is one of several surreal and unsettling flourishes that can be linked to Fulci’s catalog of unholy savagery. Even the concept of a gateway to hell is alluded to here, as an unfortunate chain of events leads to the resurrection of the dead fashion model as a zombie, which then unleashes a horde of undead upon a group of defenseless monks.

With all this talk of demons and possession, obvious parallels with The Exorcist are abundant – particularly with regard to the unsettling demonic effigy that kicks off the action, the bouts of thunder and violent wind that erupt whenever the demon has a tantrum, and not least the character of the exorcist. While not nearly as trailblazing or memorable a film as The Exorcist, The Rape After is still a solid entry in whichever category – or three – of horror you would choose to place it.