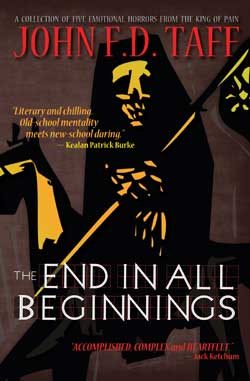 The End In All Beginnings
By: John F.D. Taff
Grey Matter Press
330 Pages

A collection of five short story/novellas with a central theme of loss of love, innocence and youth.

What Becomes God-A young boy will do anything to save his best friend of a terminal illness regardless of the consequences.

Object Permanence-Chris Stadler is institutionalized in a psychiatric facility and struggles to break free to return to a family filled with secrets, eccentricities and unusual values.

Love In The Time Of Zombies-Durand unleashes a fury onto what he thinks is a terrorist attack but turns out to be something far more macabre. His adoration for a woman of undead persuasion may never be realized.

The Long, Long Breakdown-A father and daughter reflect on the natural disaster that created the life they’ve been forced to live.

Visitation-Fenlan Daulk receives and anonymous letter to attend an annual Galactic Lottery voyage to Ophion B-2. He hopes to be reunited with his late, lost love Katmin.

The fine folks at Grey Matter Press have done it once again. The anthologies they produce never cease to dazzle the imagination, grip the psyche and render the average reader shaken and stirred. This time out The End In All Beginnings comes to us from a solitary author in the name of John F.D. Taff.

Some may argue it’s a bold undertaking to produce and publish an anthology strictly from one author. A lot is riding on that said individual to produce a lot of attention, sales and get a large audience discussing their work. It takes all of two to three paragraphs to see the confidence and faith Grey Matter Press has invested in this highly gifted and talented author, Taff.

The author’s brilliant blend of sorrow and horror clutch the emotions of the reader to the core and haunt the subconscious night and day. It’s a delicate balance to incorporate such a diverse scale of primal instincts. Each story has a tendency to hone into the most vulnerable of places we can all relate to and shred it to pieces in terrifying glory.

A central theme among the five tales appears to be loss of love, innocence or something as simple as imagination. We’re often forced to grow up far earlier than we’re prepared to. Most adults tend to abandon how sacred a child’s purity can be, especially an introverted individual. Being forced to exile these qualities before we’re prepared to is just one theme that is revisited in these tales; a sad but very real fact in most readers’ upbringing. Taff knows his market well and manages to provide appeal and allure to an immeasurable audience.

The style and prose of each story is infectious and easily digested. Perhaps most impressive is the author’s ability to shift from third person persona to first and back to third seemingly with easy. The execution doesn’t come across as clumsy or muddled in the slightest. Most readers will breeze through each tale in ripping frenzy until the bitter sweet end.

Another common theme explored is the frequent breakdown in relationships. Whether the root cause is lack of communication, estrangement, etc. is of no consequence. The visionary aspiration to revisit a once intimate relationship that has rendered its ugly fate accentuates a near sense of desperation and sadness. When epiphany arrives in our respective protagonists it’s difficult not to see a little of ourselves in these roles. Once the ugly truth has reared its ugly head be it by mistake or divine intervention, there’s no turning back. Taff is a story teller well in synch with his emotions and manages to captivate his audience along the ride as though the individual tale was crafted solely for their entertainment.

The afterword notes depicting the inspiration and back story for each tale allows us to get to know the author further and the desire to explore further endeavors has been set. As an author and fan of the story writing process I’m thrilled to charter additional tales of Mr. John F.D. Taff. 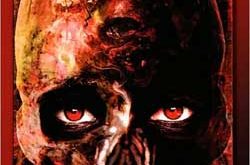 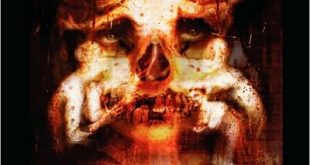 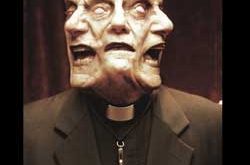