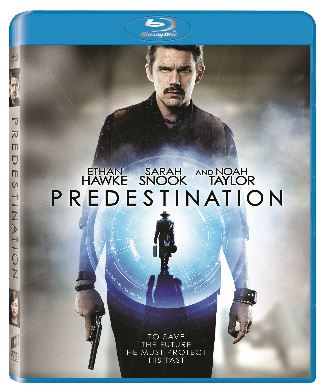 The life of a time-traveling Temporal Agent. On his final assignment, he must pursue the one criminal that has eluded him throughout time.

The Spierig Brothers are back with a science fiction mind bender called Predestination starring Ethan Hawke, previously seen in their epic vampire film Daybreakers. With Sarah (Jessebelle) Snook and Noah (Game of Thrones) Taylor in tow, the directors craft a time travel story that dives feet first into paradoxes, double occupancy and other headache inducing logistical nightmares associated with dancing between space and time. Their approach is best illustrated in the film with the joke, “What came first, the chicken or the egg? The Rooster!” Ethan Hawke’s character is after a killer known as The Fizzle Bomber who levels a few blocks of New York City in 1975 killing thousands. But to do so, he has to pull a few strings in time to steer things in his favor. The film sets up its own rules pretty quickly and settles into a surprisingly intimate story about Sarah Snook’s Jane Doe and a journalist who ghost writes as “The Unmarried Mother.” Based on the short story, “All You Zombies,” by Robert A. Heinlein, Predestination is thought provoking, entertaining, emotional and complex. 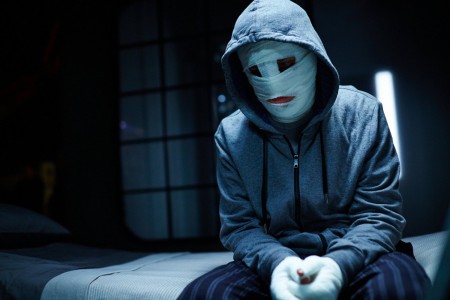 Predestination begins with the Temporal Agent facing down the Fizzle Bomber in 1975 attempting to stop him from killing 11,000 people in New York City. Fate is cruel to the Agent setting him ablaze as a mysterious figure slides his transformer field kit over to him just in time. Back in the Agent’s present, he is transformed by skins grafts and plastic surgery, given a new face and voice due to the severe damage. The Agent, strong both in constitution and will, is soon back on the job going back to 1970 to meet up with John a down on his luck journalist who writes confessional testimonials under the alias “The Unmarried Mother.” John is an unsuspecting recruit to become the newest Temporal Agent; but, as they examine his past, they discover fate has been driving them to this day for a very long time. The two head off to 1965, a pivotal point in John’s past, a chance meeting that alters the course of his future. And then things get strange.

The magnetic presence of Sarah Snook drives much of the humanity found in Predestination, she is the emotional core of the film. Her character is racked with conflict, guilt and pain. Her transformation is extraordinary both in demeanor and appearance. She brings a variety of characteristics to Jane Doe, strength, vulnerability, grit, drive and loss. At once, she is both in control of her fate and is defined by the course fate has chosen for her. She comes face to face with the opportunity to alter her own path, change her history, knowing full well the pain her past self will endure. The turmoil of doing what is right, what is just and what is in her heart is thick. “What if I put him in front of you, the man who ruined your life? Would you kill him?” the Temporal Agents asks. 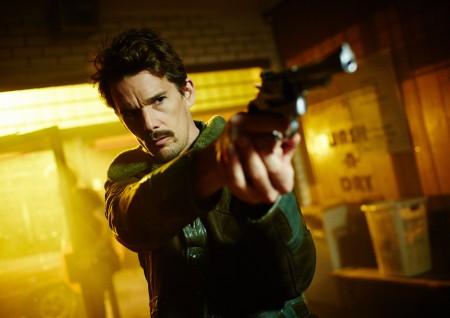 Ethan Hawke continues to impress as the Temporal Agent. He brings an intriguing broken quality to the role, a desperation and determination that drives and colors his character completely. As with all good time travel films, his character both steers and is transported by the script, both the controlled and the controlling. Hawke’s natural charisma allows him to be a bit shady without sacrificing the character’s moral core even when the hardest of choices face both Jane and himself. With the Spierig Brothers’ guidance he is able to mitigate the complexities of the paradoxes to the intricacies of a film noir crime novel boiling it down to revealing who the killer may be by softening the sharper elements of the film’s science fiction edges. He is alternately cold and caring hardened by what he knows but driven by his own memories and decisions.

The Australian directors Spierig Brothers may be best known among horror fans for their early zombie effort, Undead (2003), or their more recent vampire flick, Daybreakers (2010). With Predestination they continue to explore larger themes without losing sight of the emotional basis that can easily be lost in heavy science fiction scripts. They keep the exploration of time travel and its effects on those who travel intimated and personal. They focus on the core characters, The Temporal Agent, John the writer and Jane leaving the larger world changing events along the edges of the story – at least until its time to draw them back in for the gut punch. Their decision to draw the camera in for the closer look make for a far more fascinating film while never losing sight of the time travel explorations that define the Temporal Agent. They allow the film to sink in without pulling the brain apart to explain and express the paradoxes and more problematic time travel conflicts. Their choices in color schemes continue to be bleak and nearly monochromatic perfect for the film noir approach to the characters and the time in which they must filter. 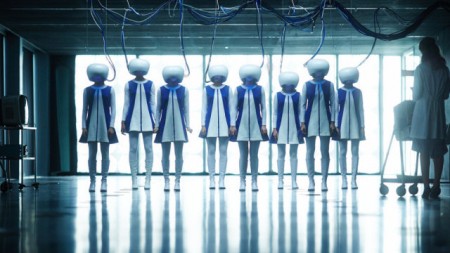 Predestination dives into the complexities of time travel without over complicating the plot of the story. The directors, Michael and Peter Spierig, explore the age-old question – in certain aspects – “What came first, the Chicken or the Egg?” with the adaptation of the short story “All You Zombies” from Robert A. Heinlein with a film noir sensibility and an intimate character driven approach. Sarah Snook, Ethan Hawke and Noah Taylor excel in the lead roles with Snook and Hawke providing the film complex and layered performances. The only problem with Predestination is in its predictability, most astute viewers will figure things out pretty quickly. Thankfully the exploration, even knowing what secrets the story may hold, is fascinating and satisfying. Predestination is a solid science fiction tale that focuses on the story without getting mired in its own science.

Predestination will be available on bluray per Sony Feb 10, 2015