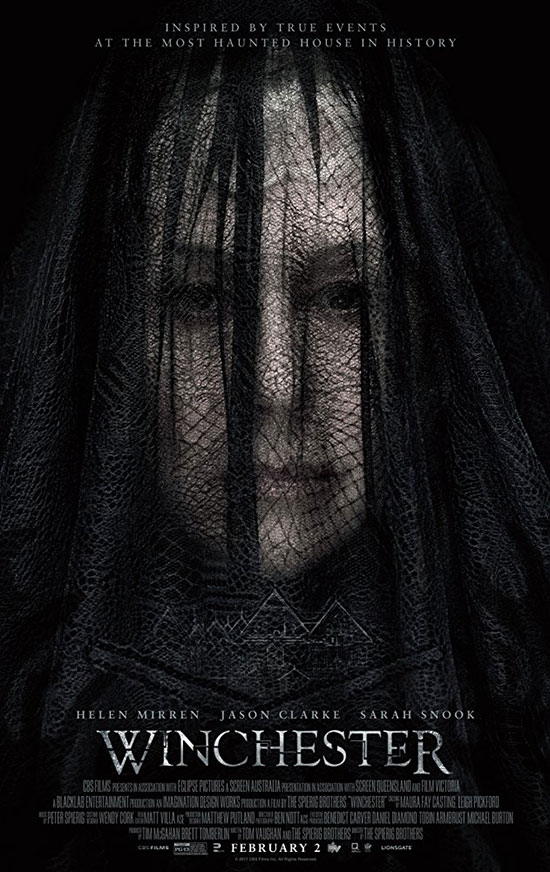 Ensconced in her sprawling California mansion, eccentric firearm heiress Sarah Winchester believes she is haunted by the souls of people killed by the Winchester repeating rifle

There are a fair amount of books and movies (see below) featuring houses/buildings that were inspired by the Winchester Mystery House near San Jose, California; however, this film, co-written and directed by the Australian Spierig Brothers (Jigsaw, 2017), is, to the best of my knowledge, the only movie that’s about the mansion itself. Having toured the weird old place myself (twice), I was at first intrigued.

What I found was a film with a great, creepy atmosphere and a pretty good back story, which unfortunately is marred by a repeated array of haunted house movie clichés, and at least one dreadfully contrived plot point. 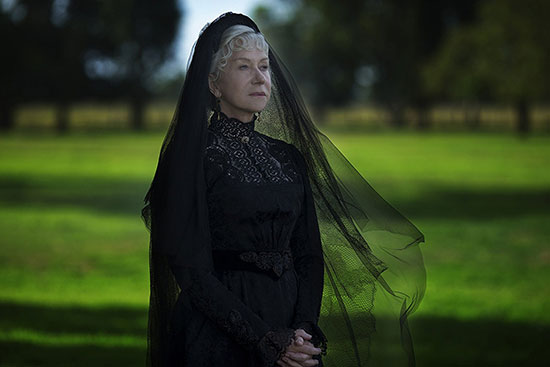 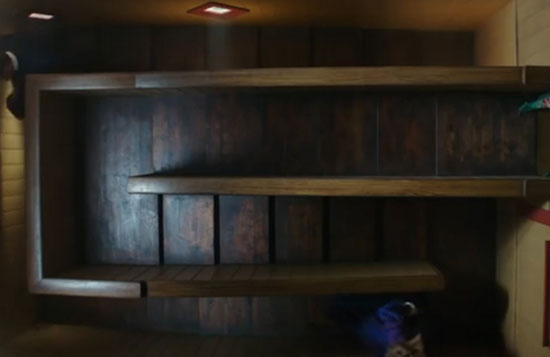 For instance, there’s the opening scene. A little boy (played by an Aussie child star named Finn Scicluna-O’Prey) starts wandering around a creepy old house in a trance, with a bag over his head like John Hurt in David Lynch’s The Elephant Man. (We later learn that he’s is the beloved great-nephew of the house’s owner, Mrs. Sarah Winchester, played expertly by Helen Mirren.) His mother, played by Sarah Snook (who previously worked for the Spierig Bros. in Predestination, 2014), follows  him and removes the bag—after which the boy gets all weird-eyed, points at a staircase that leads nowhere, and proclaims in a dramatic voice: “HE’s coming!” The significance of the bag is later explained rather well, but why include the hammy, portentous warning? It would have been more intriguing and less clichéd to just cut the scene off after Mom removes the bag and the kid gets weird.

After this ham-fisted foreshadowing scene, the film switches to the story proper. It’s mid-April of 1906, and a San Francisco psychiatrist, Dr. Eric Price, played by Jason Clarke (Zero Dark Thirty, 2012), is engaged by executives of the Winchester Repeating Rifle Company to assess the mental health of their largest single shareholder, Sarah Winchester, the wealthy, widowed daughter-in-law of the company’s late founder. Dr. Price agrees to travel to the then-farming community of San Jose to stay with the Widow Winchester for a few days and then file a report back to the executives. 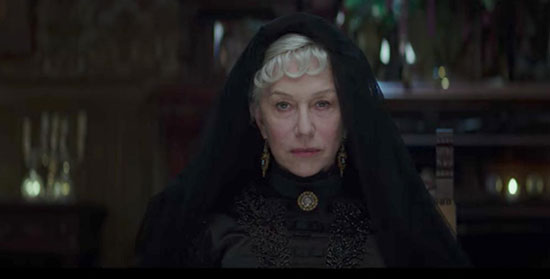 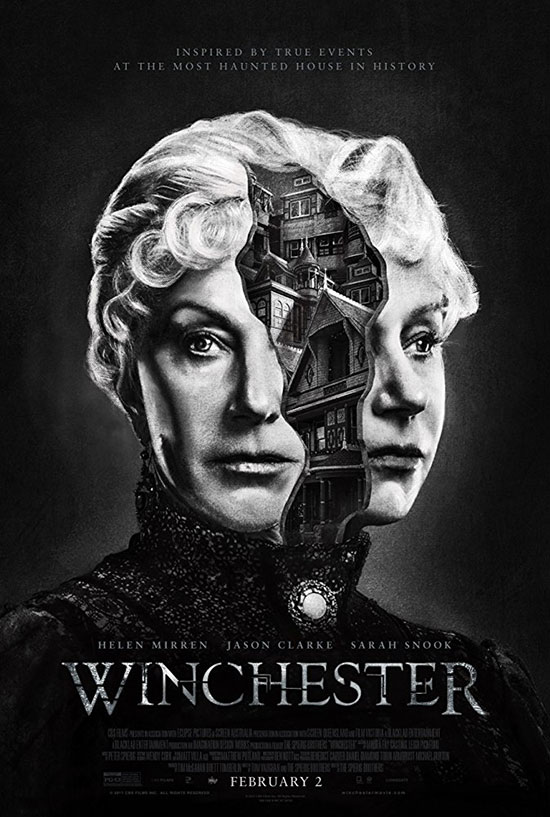 In San Jose, he finds a bizarre, many-roomed mansion that is undergoing ceaseless construction, presided over by a strong-willed elderly woman who believes she’s being haunted by the souls of the departed victims of the Winchester Repeating Rifle, her late father-in-law’s invention. Like many Victorian ladies of means, Mrs. Winchester holds séances and convenes with dead spirits. She draws architectural plans that she believes are dictated by the spirits, and engages a 24/7 army of builders to construct them. (This is historically true.) Sarah tells Dr. Price that she believes the plans are replicas of rooms where the departed souls died, and she seals each visiting spirit in their own room with a wooden plank and 13 nails (This part is made up—she didn’t do that IRL, according to the tour guides.)

The doctor starts seeing ghosts almost the minute he’s left alone in his guest room, but he thinks they are hallucinations brought on by his secret abuse of the drug, laudanum. Eventually, however, he comes to believe, especially after he sees evidence of a new, stronger and more malicious spirit that has been sensed by Mrs. Winchester—one who’s seeking bloody revenge, not simply lodging. The “new” ghost provides the usual, boring jump scares (ghosts in the mirror, rattling cupboards, more sightings of the possessed great-nephew in a trance.) There is also a sealed-up “garden room”, which Dr. Price eventually opens, revealing one of the most contrived plot coincidences ever, unfortunately. 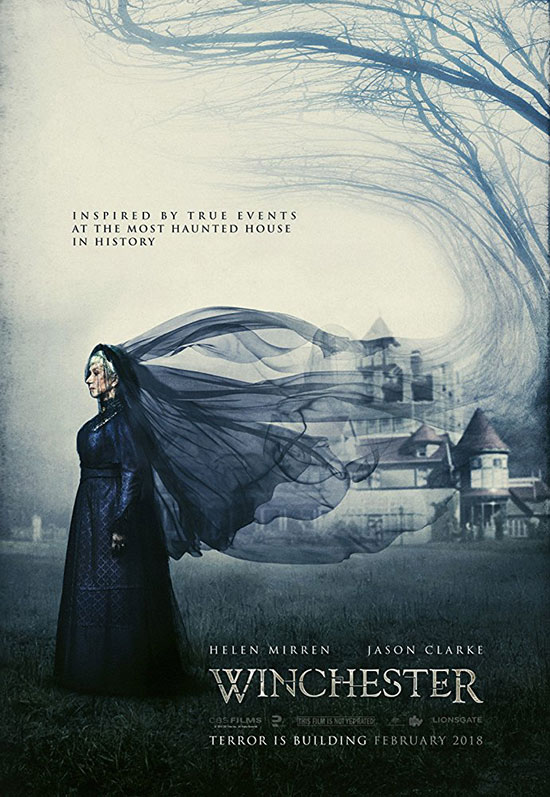 The final confrontation with the vengeful spirit coincides with the strike of the Great San Francisco earthquake of April 18, 1906, which killed 3,000 people, and which also caused much of the Winchester mansion to collapse into rubble in real life. The Ragnarok-like destruction of many of the oddly-built rooms is one of the strongest parts of the film.

The acting of the principals is very good, especially Mirren as the Widow Winchester; there’s a compelling and slightly amusing scene where the doctor interviews her about her “visions,” clearly expecting a fuzzy-brained old dear, only to find out she’s the equivalent of whatever people in 1906 called a ball-buster. And the atmosphere, as previously mentioned, is great. Without the clichéd scares, this would have been a triple in baseball terms—maybe even a home run. Alas, it’s only a double, and a skin-of-the-teeth one at that 6/10. 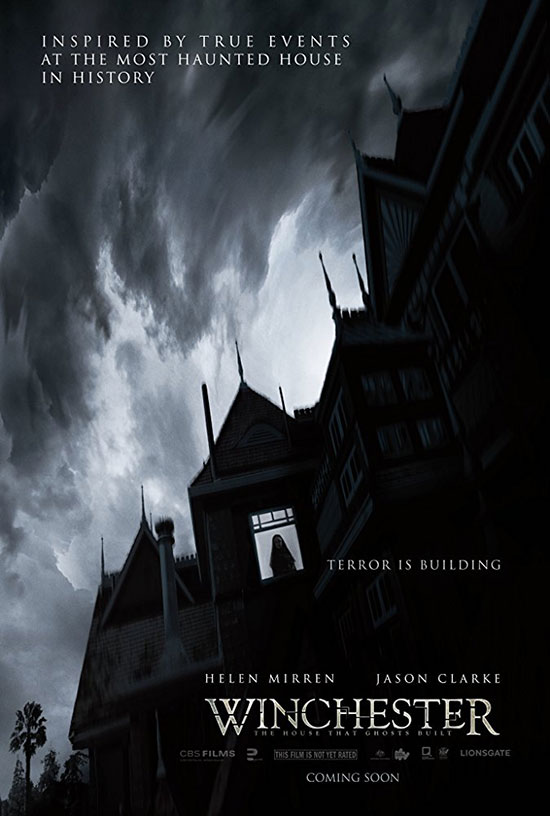 The Haunting of Hill House (1959), a novel by Shirley Jackson. This famous tale of a paranormal investigation at a notoriously haunted mansion has inspired two generations of horror writers and film-makers. Although set in an unspecified New England location, Hill House is clearly based on the Winchester house. Jackson describes rooms buried within other rooms, a kitchen with nine doors, and a plethora of oddly angled walls that aren’t trued up. Winchester is also mentioned explicitly in the novel as an example of a famous paranormally influenced house. Jackson undoubtedly knew of the Winchester house and probably toured it, as she lived in Burlingame, California–which is only about 30 miles from the house–until she was 13. Two films have been made to date based on the novel: The Haunting (1963), directed by Robert Wise, which is a vintage horror classic; and a 1999 remake of the same title, directed by Jan de Bont, which is a horrible CGI-infested disaster. Both are on disc and streaming. In addition, IMDb says that a miniseries based on the novel is in currently production, for release this coming Halloween.

Hell House (1971), a novel by Richard Matheson. Matheson’s novel was inspired by the earlier Shirley Jackson book, and has many plot similarities. A party of paranormal researchers take up residence in Belasco House, the “Mount Everest of haunted houses,” once owned by a notoriously depraved weapons heir (recalling the Winchester family’s firearms empire.) One of the main differences is that, where Hill House was rather genteelly haunted, Belasco House is haunted by in-your-face poltergeists who perform all kinds of over-the-top attacks on the investigators, including sexual ones. The film version, The Legend of Hell House (1973), directed by John Hough, is a vintage horror classic, easily found on disc and streaming. The book was also turned into a comic book miniseries, Richard Matheson’s Hell House, published in 2004.

The Shining (1977) , a novel by Stephen King. In crafting his epic bestseller about a haunted hotel, Stephen King borrowed a central idea hinted at in the Shirley Jackson novel: that of a haunted building that is a thinking, conscious entity of its own, which wants to feed on the energy of a psychically gifted person. The 1980 film version with the same title, directed by Stanley Kubrick, is one of the greatest horror movies ever made. A much-less successful miniseries, written and produced by King and directed by Mick Garris, debuted on ABC in 1997. Both productions are easily found on disc or on streaming.

Rose Red (2002), a four-hour television miniseries, directed by Craig R. Baxley, which was written by Stephen King directly for the small screen. Although highly derivative,  Rose Red is an entertaining mash-up of The Shining, the Winchester mansion legends, and The Haunting of Hill House. The plot, the tag line, and even several characters are so derivative of Hill House it’s a wonder Shirley Jackson’s estate didn’t sue. King later wrote a book, The Diary of Ellen Rimbauer, based on his own miniseries, which I haven’t read, and a television movie of the same name, which was also directed by Baxley. The miniseries is on disc; the television movie is on disc and streaming.