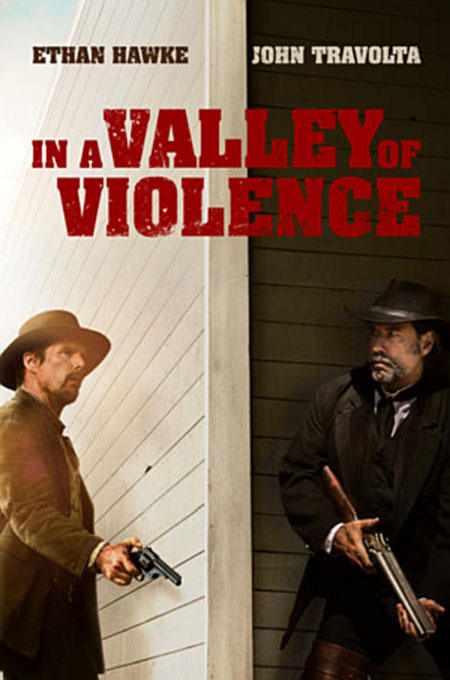 A mysterious stranger and a random act of violence drag a town of misfits and nitwits into the bloody crosshairs of revenge.

A lot of directors in the horror genre tend to want to work in other genres, not wanting to be known as just another “horror guy”. John Carpenter himself tried to avoid being pigeonholed by directing movies such as Starman and the highly entertaining Big Trouble in Little China. Even Rob Zombie has mentioned wanting to work outside of horror. It’s an understandable desire to want to try something different, but we always hope that the directors don’t completely abandon this genre that we love.

With the movie In a Valley of Violent, director Ti West tries his hand at the Western after giving us such entertaining horror entries like The Innkeepers and House of the Devil. He gives us the story of Paul (Ethan Hawke), a drifter on his way to Mexico with his loyal dog. On his way, he stops in the troubled town of Denton to pick up supplies.

Despite wanting to avoid trouble, Paul ends up breaking the nose of one of the town bullies. He’s quickly encouraged to leave town by the town’s Marshal (John Travolta), who wasn’t overly happy that the person Paul punched was not only one of his deputies, but his son. Paul takes his advice and leaves, but the Marshal’s son and his goons can’t leave well enough alone. Faster than you can say “John Wick”, they kill Paul’s dog and throw him off a cliff. Thinking him dead, the return to Denton. Paul survives and goes back for revenge. 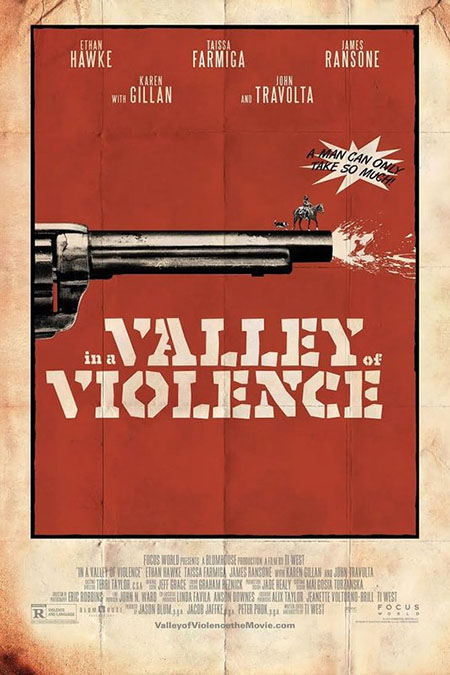 If this movie is meant to be an homage to the spaghetti western, then Ti West succeeded. He gave us a group of characters that would easily fit into a Sergio Leone classic, and the movie had the same gritty, violent tone of those movies of yore. The setting has the same desolate look  you’d expect to see in the genre, with Denton looking like a rundown place that’s on the verge of becoming a ghost town. The cinematography expertly captures the feel of a classic Western. Everything has that dusty dirty look we’ve come to expect. 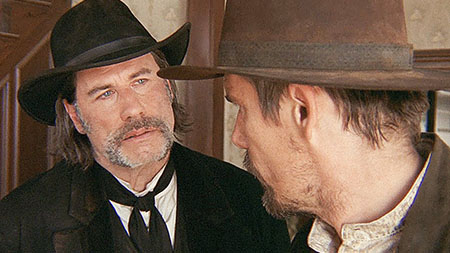 Even the main character of Paul, follows the same kind of archetypal anti-hero that we’ve seen in similar movies. He’s a man with a troubled past filled with questionable actions. He doesn’t want to be a hero or get involved with the people of Denton, but he feels his hand is forced by his thirst for vengeance. We have the Marshal as the corrupt man who runs the town. However, he seems that he can be fairly reasonable under the right circumstances as long as his authority isn’t outright challenged. The main antagonist of Gilly is the classic bully whose relationship to the Marshal makes him think he can push people around. These are characters that feel familiar because we’ve seen their type in several Westerns over the years.
West, who’s always managed to put together a decent cast for each of his films, bring us his most impressive yet. We get the likes of Ethan Hawke, John Travolta, Taissa Farmiga, Karen Gillan, and even horror vet Larry Fessenden bringing their a-game. Hawke was fantastic as the tortured Paul, and Travolta looked like he was having fun chewing scenery. The weakest link may have been Gillan, but she still does a pretty decent job in her role as the fiance to the trouble-making Gilly (James Ransone). Ransone is the movie’s main antagonist, and he made for a great slime ball that you want to see get his ass kicked.

If there’s a problem with the movie, it’s that it doesn’t do anything new. It follows the tried and true formula of the Western almost to the letter with little deviation. You can pretty much predict where the movie is going long before it gets there. That means that there isn’t going to be a lot of surprises along the way. Despite the adherence to the genre’s formula, the movie is still an entertaining, exciting addition to the Western.

A very enjoyable flick definitely worth checking out. In a Valley of Violence shows that Ti West is capable of making a good movie outside the horror genre. While I hope he still continues to make more entries into our favorite genre, I look forward to seeing what he does next regardless of what it is.