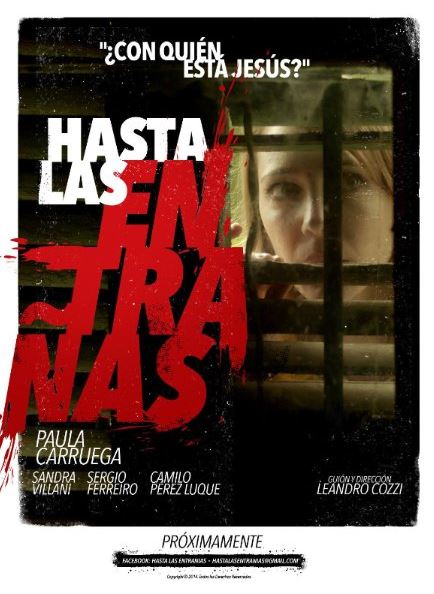 A social worker in a primary school must manage the case of a student who hasn’t been attending classes for several weeks. When she arrives at the boy’s house, she discovers an unexpected reality.

Another short film, kids! Today we have HASTA LAS ENTRANAS (FROM THE GUTS). This is a short film from Argentina in Spanish with English subtitles, written and directed by Leandro S. Cozzi. This is his debut film.

Our story opens with two faculty members of a rural primary school. Teacher Elana (Sandra Villani) and social worker Flor (Paula Carruega) are having a smoke break while the students are at recess. They are discussing a student named Jesus (Camilo Pérez Luque) who has been missing from school for the past two weeks. He left behind a well-loved stuffed animal that Flor says belonged to the boy’s mother.

Jesus is a quiet and odd child, and Flor is concerned that she has not been able to reach his family to find out why Jesus has not been in school. So she decides to go to the address on his records and see for herself what has happened.

She arrives at the run down home and speaks with Angel (Sergio Ferreiro), an elderly man who I think is the boy’s grandfather. He informs Flor that the boy is with an aunt and that the family is moving, which is why he has not been in school.

But there is something very wrong at this falling down house. And Flor will soon get a small glimpse of exactly what that is, whether she likes it or not.

There is something really magical about this film. The overall look is surreal, but still rooted in some sort of reality at the same time. Sound, score, film quality, everything is really well done. The cast members all have quite long credit listings for Spanish language productions, with the exception of Camilo, as this is his first film. All of the cast performances are amazing.

And I have to talk special effects. A company called El Sotano (The Basement) is an effects company based in Argentina. They have created effects for film, television, theater, and advertising. They seem to do a little bit of everything, judging from their website.

In this movie, they provide some really good effects. When weight is required, it’s visually there. When color must be accurate, it is. I don’t want to go into too much detail and give spoilers, but you’ll see what I mean.

Mr. Cozzi has really delivered something special. It’s hard to believe this is his very first film, and I will definitely be looking forward to future productions from him and his team.

So using my special short scale of one to five, five being awesome, I’m giving this film 5 teddy bears.