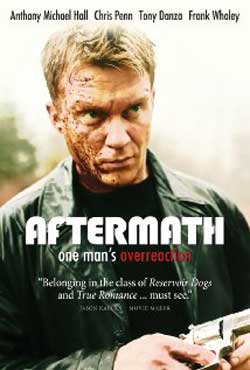 A dark comedy about one man’s overreaction! Roma’s (Anthony Michael Hall) perfect life unravels when his foreman goes missing and he chooses to fire the wrong guy.

Aftermath is a mystery of a film in itself. There is so little information about it on the internet that one would think it doesn’t exist. This is an oddity as even obscure films I’ve seen dating back to the 70’s have more facts than this film. I’ve had to do some guess work about Aftermath and I’ve come to this conclusion about it’s production date: It stars Chris Penn so it must have been made prior to his death in 2006 (IMDB doesn’t even have its production dates) however it is only being released this year. Rarely does the internet have so little about a film and by golly it is a shame because this film should be seen. Aftermath is a god-damn gripping crime thriller/horror in the same vein of the great Reservoir Dogs and had me captivated from beginning to end.

Aftermath tells a small scale story about the ways in which people’s lives intersect. A bit like Crash but less preachy. Thomas Fioroni (Anthony Michael Hall) owner of a thriving construction company plays hardball with his employees making sure they all do their part. Below him is foreman Matt (Jamie Harrold) who carries most of the weight of the business with Fioroni often breathing down his neck. When Matt comes head to head with Tony Bricker a framer on probation (played by the late Chris Penn) things start to get messy. Matt goes missing and before long the characters begin a domino effect of conspiracies and murders.

I’m a big fan of small dramas with strong characters and Aftermath is the perfect example of this done right. All the characters have strong personalities with their feature motive to protect themselves and their family. Small errors made by one person leads to catastrophic consequences for another, this is intelligent writing by the director Thomas Farone who has obviously created his personal baby in the shape of this film. Farone’s eye is all over Aftermath and its what makes it an original film. With non sequential scenes in the film covered over with the characters narration and a brutal pace the film could easily be passed off as a Tarantino/Guy Ritchie rip off but it has enough originality to be its own sort of film. The individuality of the characters and their actions is what draws you into the film and the score that plays behind them is marvellous. It does present its narrative as a comic book which I found a little redundant though as I believe the film is strong enough itself and doesn’t need to use any gimmicks to appeal to its audience.

The ending though did confuse me with a ‘reveal’ or something similar that didn’t make too much sense to me. I don’t know if the copy I saw was a rough cut or not but I would love to pick the directors brain to find out exactly what the ending meant.

Aftermath has an array of actors who’ve been in the business for a while. Most notably Chris Penn and Anthony Michael Hall who play the two leads going against one another in a battle royale set at a construction site. The acting is at a high calibre however I did find the progression of the characters arcs to be a bit dramatic at times. I don’t doubt their actions however a lot of the time they speeded to a turning point too quickly without enough time for the audience to see their journey. Yet this is just a small critique and I’m sure most viewers won’t think twice about the characters trajectory. So I’ll stop complaining because it is just nice to see a film that cares about character and for that I want to congratulate Aftermath.

This hidden gem is a fun ride with black humour sprinkled through out for good measure. If you have a chance go see this because geez it is always nice to be entertained by a killer thriller.