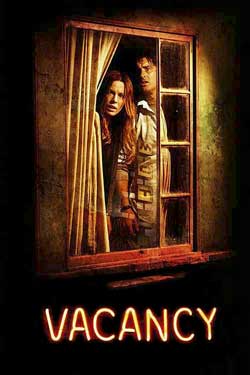 A young married couple becomes stranded at an isolated motel and finds hidden video cameras in their room. They realize that unless they escape, they’ll be the next victims of a snuff film.

Even big names Kate Beckinsale and Luke Wilson couldn’t save this anti-climactic steaming pile of crap. The premise seems like a good recipe for potential terror: An estranged couple finds themselves entrapped in a diabolical scheme to produce actual snuff films from unaware and hapless hotel patrons. When dealing with the topic of snuff (a subject rich in sadistically creative possibilities), filmmakers should treat their depictions with care. After all, the grimy realness of the taboo “snuff film” is what makes this theme so horrifyingly juicy. However, in Vacancy, director Nimród Antal not only fails to deliver a satisfactory portrayal of snuff, but to portray it period.

The only thing you really see in the VHS tapes (how retro for 2007), are random people screaming and being tossed around like rag dolls by men masked in laced panty hose. Yes. Laced. Not just regular old black panty hose, but laced.

The victims seen in the blips of the snuff seem as if paralyzed—the assailants throw them at one another like baseballs. Oddly, often the assailants don’t appear to have a weapon present. The howling wails of the uninjured victims, in an irritating incongruity, don’t even match the presented scenery. Nothing about these implied disturbing films makes sense.

Honestly, how the snuff producing serial killers make any profit from these films is a mystery.

Also just as perplexing is the question of how this hotel front exists completely under the nose of police. If dozens and perhaps hundreds of travelers vanish along a similar route, wouldn’t someone notice? On top of these improbabilities inhibiting my willing suspension of disbelief, is a moment where the hotel manager decides it’s a good idea to kill the investigating cop.

Right. Because the station who sent him out would never wonder what happened to him and send backup.
These cunning criminals sure know how to keep under the radar. 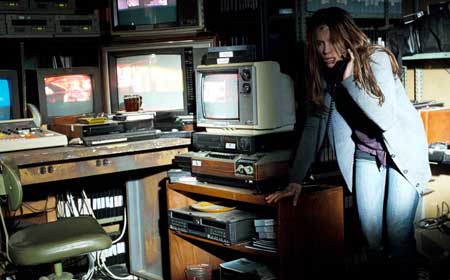 This underwhelming train wreck starts with a bickering couple lost in the mountains because husband David decides to try a shortcut—never a good idea. Way to go David. Cold and lithium-addled wife Amy emasculates David with every opportunity. They eventually break down and walk to a sketchy hotel nearby. Inside waits an even sketchier hotel clerk whose eccentric behavior sets the precedent for foreboding danger. As the couple  approaches the desk, screams echo from the back room. When the odd clerk leaves his office to greet the couple, the screams continue to bellow—screams which the clerk claims to come from a horror movie. Though the whole situation reeks of danger, Amy and David choose to stay overnight. The sole occupants of the eerie inn then walk wearily to their dumpy room complete with roaches and brown running water. Amy pops a couple pills while the probable sex-starved David searches for p*rn. 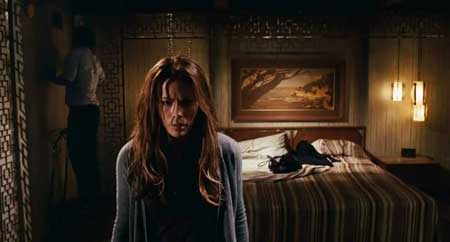 Frustrated with the pure static channeling through the archaic television, David pops in the mysterious VHS tapes above the set. Initially, both David and Amy do not realize that they are witnessing snuff. We hear the screams, see the tossing of frozen bodies, and then David realizes that the set of this no-name horror flick looks awfully familiar.

All the while, a rude intruder bangs violently at the doors to their room.

Each time David investigates, he finds no intruder behind the door. If the assailants seen in the tapes had quit playing pranks and just got on with killing the couple like they had in all the tapes shown, then unlucky viewers of this film could have been spared the movie. The movie never bothers to explain why the snuff makers deviate from their original methods. Nevermind the fact that the people behind the murderous scheme can hear and see David and Amy’s every movement (as revealed by the panoramic camera angles on an array of television sets in the manager’s office). If we were to approach this film with any realistic perspective, we would surmise that David and Amy never had any chance of survival whatsoever, and would probably meet their demise quickly.

So, despite what seemed like a big budget and the featuring of prime actors like Kate Beckinsale and Luke Wilson, this film was a complete flop, tedium and lackluster included. At its conclusion, you’ll feel nothing but a mixture of relief and utter disappointment. 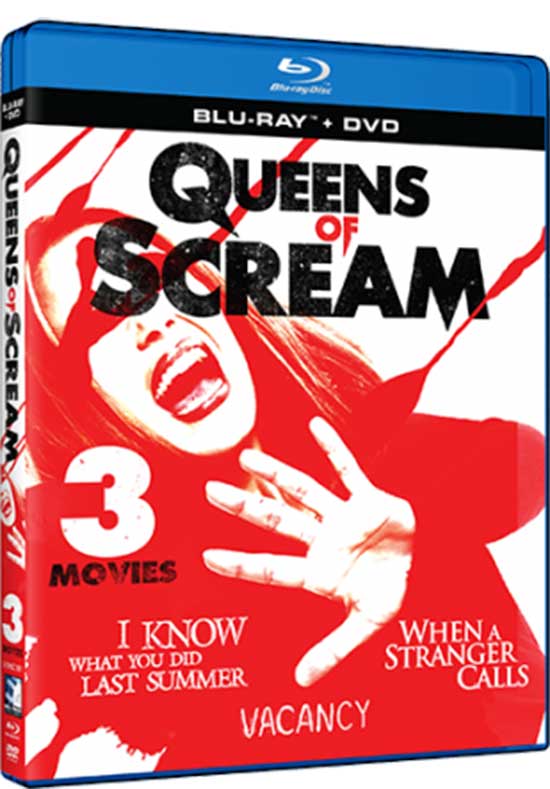