In THE SHED, Stan (Warren) and his best friend Dommer (Kostro) have put up with bullies their entire lives. All of that changes when Stan discovers he has a murderous vampire living in his shed. Seeing the bloodshed and destruction the monster is capable of, Stan knows he has to find a way to destroy it – but Dommer has a much more sinister plan in mind.

FINALLY, A NEW BAD A$$ VAMPIRE MOVIE. This movie makes you remember why you love vampire movies.

At least that’s what I think. The Shed was written and directed by Frank Sabatella. Frank Sabatella is a talented writer/director/producer with some great credits including, Children of the Witch, The House That Cried Blood (If you haven’t seen that one, get on that and watch it!), and Blood Night: The Legend of Mary Hatchet, Night of the Pumpkin.  He has made quite a few great horror films. Movies that some of us are still watching every Halloween or when we need to watch a great movie.

We find Bane (Frank Whaley) in the woods and oh, something is following him. We meet the vampire. This vampire (Damien Norfleet) is a bad ass. It has creature-feature quality of Radu in Subspecies, if you haven’t seen it, GO WATCH IT and the watch The Shed again. I digress, Bane is still in the woods and the vampire bites him. Morning comes and Bane is saved…. By daylight but he is still bitten. 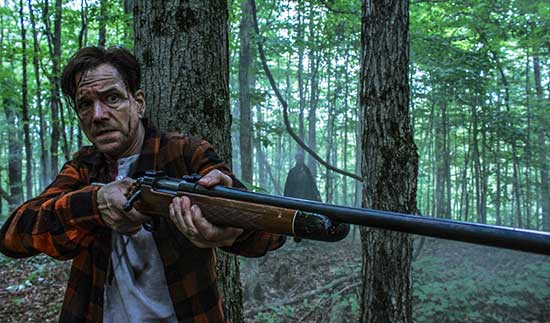 You are on the edge from the beginning. Bane makes himself at home in the shed. We had a shed where we used to live and I would listen at the door before going inside the shed. We meet Stan (Jay Jay Warren), his mom is happy and friendly, wakes him up for breakfast. His parents make out at the table, his response is probably most teenager’s response, “eewww gross.” His parents, Kathleen (Caroline Duncan) and Robert (Sal Rendino) Well, that was nice for a second. It was a DREAM. His parents are gone. This is sad. Stan lives with his grandfather Ellis (Timothy Bottoms).

The Sheriff Dorney (Siobhan Fallon Hogan) and the Deputy Haiser (Mu-Shaka Benson) Siobhan does an incredible job playing the Sheriff. The Deputy is using the tough love route and the Sheriff is trying to cut him some slack. It seems like life isn’t easy for Stan.

We meet Roxy (Sofia Happonen) and Dommer (Cody Kostro), the best friend. He’s the Evil Ed to the Charley Brewster. 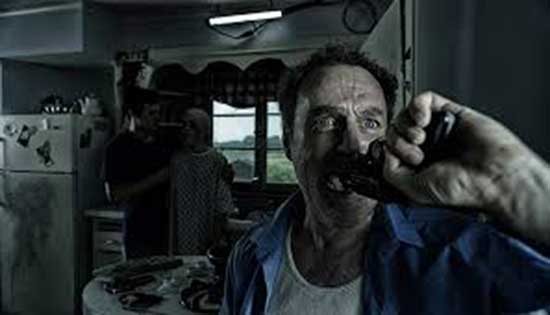 Oh, now we meet the resident bad boys, Ozzy (Uly Schlesinger), Marble (Chris Petrovski), and Pitt (Francisco Burgos.) They are busting Dommer’s ass being ballbusters. Chris Petrovski does a great job playing Marble. Sabatella said during an interview with Horrornew.net that Chris auditioned for Dommer. Sabatella saw him as Marble.

Stan stands up Marble to help Dommer. Stan and Dommer skip out and head to where they hang out and talk shit. It’s a good movie so far. It’s cool to see the Polaroid’s and the boom box with cassettes (Those are what we had in the eighties/nineties until the digital world took over.) Stan looking at photos and not staring at a phone. It was cool to see that.

(Always trust the dog. A life-lesson.) Stan heads outside after his nostalgic moment was interrupted by his grandfather. Stand goes out to the shed. A focal point in this movie. A character in itself. He didn’t even listen at the door, this is nerve-wracking and it happens fast. Stan meets Bane. The poor dog, why, why send the dog in. 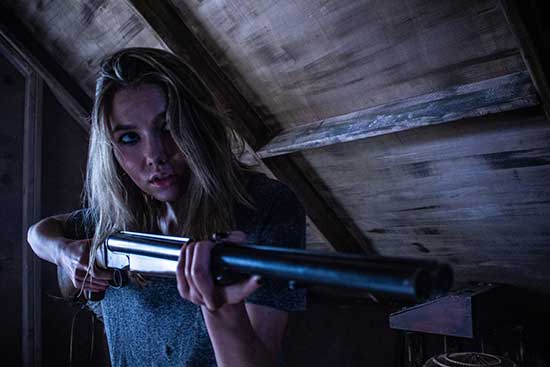 Stan tries to get help for the poor dog but the grandfather wants answers now. DON’T GO IN THE SHED. Why do I bother yelling? The grandfather is going in now. He’s ready to kick some ass. We learned over the years that some grandpa’s survive with vampires and well, some don’t. Bane is ravenous and animalistic. Stan is jumpy yet ready rumble.

It has been a while since we had a fun vampire movie. A movie with a killer vampire. Sabatella gives us a gritty, sly vampire. A nice, “Howdy, I’m gonna separate your head from your shoulders” (Bill Paxton as Severen in Near Dark.) vampire. Severen would appreciate this vamp.

Stan’s back at school. The story and the characters are interesting. You root for Stan. You want things to be okay for him. They are relatable, in a movie sort of way. They have back stories and conversations. Stan is back home. Dommer is getting his ass kicked. (Where are the neighbors? No one ever sees anything. I guess that’s a small town thing.) The vampire wants out of the shed. It tries. (Never leave your friends to keep an eye on the vampire in your shed. Just saying.)

Dommer found an answer for some of his problems. I’d imagine that hole is going to a huge problem at night. Dommer thinks it’s a pet, it’s not a Gizmo, and it’s a VAMPIRE. Stan is watching a vampire movie and having Roxy visions. This sort of leaned into Fright Night II, with Regine Dandridge (Julie Carmen) visiting Charley Brewster (William Ragsdale) during his sleep yet it’s a nightmare. Stan wakes up fast and panicked.

(I feel like Stan should call Peter Vincent now.) And, for once, well since, Along Came The Devil 2, we get an awesome under the bed, kick ass scary scene. It made my heart grow. Back to the shed Stan goes. Whelp, there goes the pet monster, (Maybe watch, My Pet Monster, it wasn’t completely terrible.) The Sheriff shows up. Oh, the Sheriff and there’s always one cop. Just one. Siobhan Fallon Hogan does such a great job in this. Sabatella’s shots are beautiful, dark and, subtle.

Granted, Stan has a vampire locked in his shed, you still root for him. The Sheriff is trying to get Stan to spill his guts. There isn’t anything too overwhelming in this movie. The music is good, there is a build-up yet a slow-burn to what will happen. Will it be okay? Will it get worse? Marble is being a jerk, Chris is great as this character. He has played a variety of great characters in Madam Secretary, The Blacklist, In The Moment and more. Jay Jay Warren shows his ability to portray different characters, he has been in Unfriended, Day of Reckoning, Bosch and more. The range of these actors is impressive.

Siobhan Fallon Hogan, Men in Black, Dancer in the Dark, Going in Style, Forrest Gump, Saturday Night Live. She is a force of talent. She plays the Sheriff in her own way. The Sheriff shows up, first the dog, grandpa, now Marble because his need to beat the crap out of Stan seems to overwhelm his life. He is a bully and he doesn’t quite know what he’s walked into. Oh, good Dommer showed up. Because, he is fine, rational. Cody Kostro (Worst Friends, Law& Order: Special Victims Units.)

The message of bullying has showed up in so many different films. Every person handles it differently. Movies like, Carrie, King Jack, Some Kind of Hate, Bully, Let Me In, and Mean Creek. There are a lot of movies that touch on bullying. Bullying in a small town with a teen desperate to make it stop. It’s sad and the way Sabatella included it, it made it meaningful. (Be kind to one another folks.)

And… ROXY shows up, because there aren’t enough people involved. Roxy’s reaction to the severed arm is way different than Marble’s. (How does one just explain, oh… ooops, there is a vampire living in my shed.) The Frog Brothers would be READY! The transition phase in the shed. The shot of Dommer holding Marble up in awesome. This transition is insane.

Sabatella did an incredible job. He made a legit vampire movie. A scary, fun, thrilling vampire movie. The Shed made me remember why I always loved vampire movies. The remake of The Animals, “The House of the Rising Sun” is dark and melancholy, perfect for this movie. Oh, good, the attic.

There is a fight, lots of cool special and practical effects. Some cool one-liners delivered by Roxy. This was a great film, you need to watch it. Watch it for the characters, the effects, and the vampire. The Shed was excellent. You need to see the ending. That, ending… OH MAN! Watch The Shed.