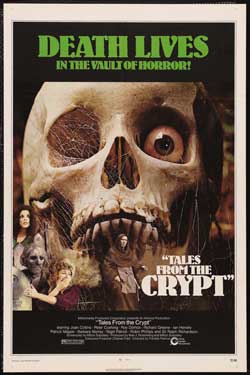 Five people get lost in a crypt and meet up with a strange crypt keeper who tells them stories of how they died.

Holy Jeebus, I haven’t seen this film since I was a kid. Based on the classic “Tales from the Crypt” and “The Vault of Horror” comics from EC, written by Bill Gaines, Al Feldstein, and Johnny Craig, this 1972 classic horror is sheer cheesy goodness.

This is, as one would expect, an anthology horror film. our stories are held together with a wrap around tale of a tour group entering some ancient catacombs. The tour guide(Geoffrey Bayldon) makes it clear that everyone should stay together. Of course they don’t. A few people fall behind and find themselves trapped in a part of the catacombs they really shouldn’t be in. 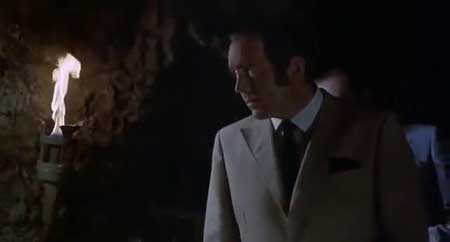 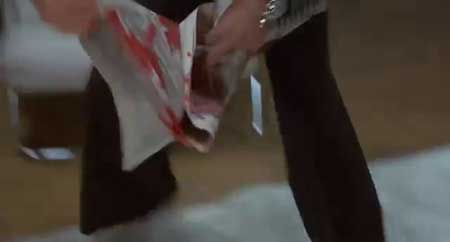 Along comes our “cryptkeeper”, (sir Ralph Richardson) and no, not the one we have all come to know from the tv series of the same name. He takes charge of our lost tourists and takes them on a completely different tour than the one they signed up for. As is common in these sort of films, each story is a morality tale and each character is forced to face their sins. Each vignette is from an original story from the comics. 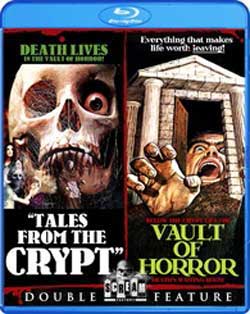 The first story,AND ALL THROUGH THE HOUSE, begins with Joanne (Joan Collins) taking out her husband (Martin Boddey) with a really big knife. She’s after the insurance money, you see, like any good greedy gold digger who marries an older man. But you can’t get something for nothing, as our dutiful wife learns the hard way.

There’s a serial killer on the loose, dressed as jolly Saint Nick (Oliver MacGreevy). And when she makes Santa’s naughty list, he delivers a bit more than a lump of coal as retribution.

If the premise of this story sounds familiar to you, it should. This is the premise for the film Silent Night, Deadly Night. In fact, all of these stories have been used as the inspiration for other feature-length films. 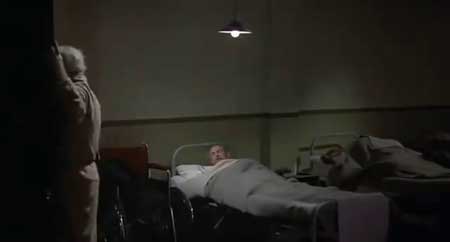 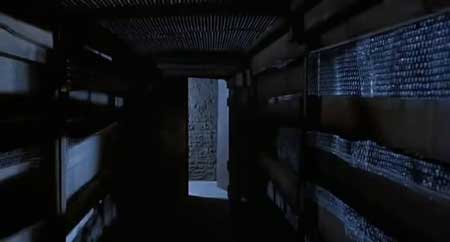 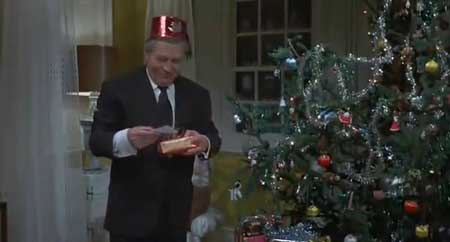 The next story, REFLECTION OF DEATH, follows Mr. Maitland (Ian Henry), who is diddling about on his wife. He leaves his wife (Susan Denny) and two children, ostensibly for a “business trip”. Yea, like we haven’t heard that one before. but you know…it’s 1972. Apparently this sort of thing happened all the time. Anyway, this business trip is one way – he has no plans to ever return to his loving family. He joins his mistress Susan (Angie Grant) and together they head out to start their new life. But karma is a bitch, and things don’t go exactly the way he planned them.

Our next story POETIC JUSTICE focuses on Elliot (Robin Phillips) who is disgusted by the local old toy maker Mr. Grimsdyke (Peter Cushing) who makes toys for the neighborhood children. Grymsdyke is a widower who finds his joy in making the children happy. He also spends his alone time speaking to his late wife via ouija board.

Scrooge-like in nature, Elliot wants the old “rubbish collector” out of the area so he won’t ruin the property values. He does things like tearing up the old man’s rose garden, and calling the cops to take away the man’s dogs. He even screws the old man out of his employment before he can collect his retirement. 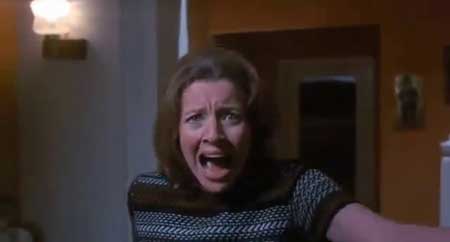 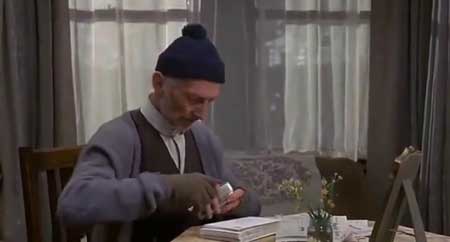 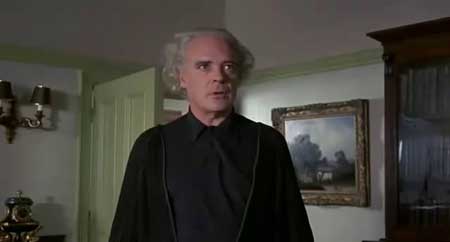 Elliot eventually manages to turn all the neighborhood mothers against the old toymaker. Basically, every ounce of joy is sucked out out of the old man’s life. Nice guy, huh? But fear not. the wealthy little bastard must eventually pay the piper for his cruelty.

Next we have Wish You Were Here. In this story, an unscrupulous executive(Richard Greene) has risked his acquired wealth in a failed scheme. His accountant (Roy Dotrice) has advised filing for bankruptcy. However, Ralph is too materialistic to sell his belongings to satisfy his debts, and desperately seeks another way out. Turns out an antique he bought has an incription that claims to grants him three wishes. His wife Enid (Barbara Murray) foolishly makes a wish, and once it is granted the slippery slope begins. Nothing comes for free, kiddies. And if you know anything about djinn or the fable of the monkey paw, this can’t end well for the wish maker. Have you seen that car insurance commercial where they explain that genies take everything literally? Yea…..

Our final story is BLIND ALLEYS. a former Army Major (Nigel Patrick) takes over the responsibility of running a home for blind men. He comes in with a military attitude, and his compassion is less than present. He uses his retired military dog as a sort of enforcer, and terrifies the men into obedience.

One of the residents ( Patrick Magee) is chosen as representative to speak to him about the lack of services, such as heat. However, The Major would rather save money than be a human being. So he basically tells them to get over it, and that doesn’t go over so well. As time goes on, he starts skimping on the food as well, but of course he doesn’t deny himself any comforts.

When one of the residents becomes ill, the Major once again shows his lack of humanity.

But karma will not be denied. In this case, karma is helped along by human intervention. I’m not a fan of how this one plays out. It bothers me. But after all, that’s what a horror film should do. And if you are an inhuman A-hole, you deserve whatever you get.

Which is the moral of story, kiddies. Don’t be an A-hole.

On a scale of one to ten, ten being awesome, I’m giving this film 9 cryptkeepers.