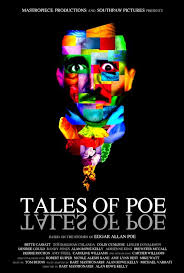 A terrifying new anthology film comprised of three stories based on the work of Edgar Allan Poe,

The stories of Edgar Allan Poe had a towering influence on horror cinema through the years. Indeed, his short story The Gold Bug was turned into a film in 1910, and his stories have influenced generations of filmmakers over the decades since then. Some would say that without Poe, Roger Corman would never had been as influential & respected a filmmaker as he eventually became. This year, the film making duo of Bart Mastronardi and Alan Rowe Kelly have written/produced/directed Tales Of Poe, a sincere tribute to the master of the macabre that aims to introduce some of his most popular stories to a new audience in the form of an anthology film. 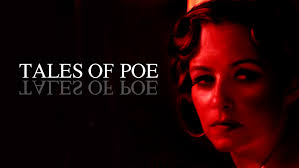 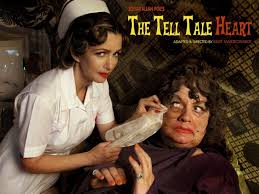 The film leads off with The Tell Tale Heart, and stars genre stalwart Debbie Rochon & Alan Rowe Kelly. Rochon (Credited as “The Narrator”) plays the newest guest of an asylum, who has a story to tell about how she ended up there. She was previously employed as the live in nurse to former starlet Peggy Lamarr (Played by Kelly), and although all is well in Lamarr’s vast estate – there is something about her that strikes her visitors the wrong way. If you’re at all familiar with the story, you know where this is all headed. Director Bart Mastronardi brews a heady concoction filled with ominous shadows, gorgeous set design & some extreme gruesomeness towards the finale. Rochon adds class & professionalism to every project she takes on, and thanks to some excellent makeup, Kelly becomes a most unsightly boss. I did have a bit of an issue with the camerawork in this opening story, as it seemed to waver – uncontrollably at times. But in the end, it isn’t a dealbreaker and The Tell Tale Heart opens the film in fine fashion. 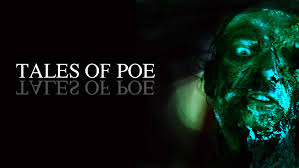 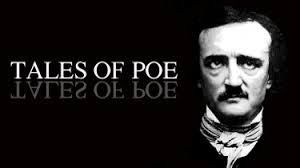 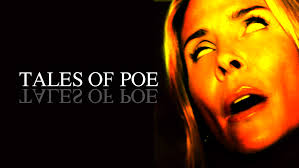 The second story is called The Cask, and is based on The Cask Of Amontillado. Opening on the wedding day of Fortunato Montresor (Randy Jones) to his bride Gogo (Alan Rowe Kelly), it tells a story of betrayal & revenge. Fortunato is ill, but puts on a brave face for his new bride and their quirky wedding guests. During a lull in the celebration, Gogo sees a strange hooded figure standing off in the distance, but tells no one else – is she the only one who can see it? Fortunato tells his guests the story of a fabled cask of Amontillado wine as he leads them downward into his fabled wine cellar, but there’s something strange going on. Once they reach their destination, one of his guests goes into a frenzied trance, seemingly brought on by a bottle of wine he has stored in his cellar. She realizes that something is off, but can’t quite put her finger on exactly what it is. Once again, if you’re at all familiar with the original story, then you know how this one will end. Director Alan Rowe Kelly takes a familiar story and puts a neat spin on it thanks to some offbeat casting choices. You might not know who Randy Jones is, but his face will be very familiar to fans of The Village People as he was the Cowboy in that fabled disco group. He seems to be very comfortable here and essays the role of Fortunato most effortlessly, not that it matters, but I couldn’t help but notice that he looked a lot like actor Laurence Harvey circa 1973. Kelly gives Gogo an air of adoration in her actions towards Fortunato at first, but as the story continues, Gogo becomes an extremely malevolent & distasteful character that fairly drips with evil as she proceeds with her plan to do away with her brand new husband. The makeup effects here are especially effective & there are some really evocative shots that illustrate the splendor of the wedding in a most convincing manner. This one is a winner as well! 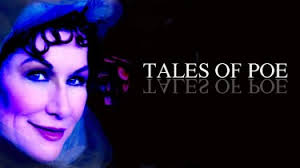 The third and final entry is called Dreams and is based on the poem of the same name. Starring the scream queen triumvirate of Amy Steel, Adrienne King & Caroline Williams, it’s by far the weakest part of the film. Although it looks gorgeous and plays like a really demented fever dream, it’s extremely heavy handed and slow. Bette Cassatt plays Dreamer, a young lady who’s going through what seems to be a really bad LSD trip – I honestly couldn’t say. Mastronardi does a good job in making it all look nice, but Michael Varrati’s script left me nearly comatose. Perhaps my unfamiliarity with the poem played a part in my opinion, but despite some really neat visuals – Dreams nearly lulled me to sleep. 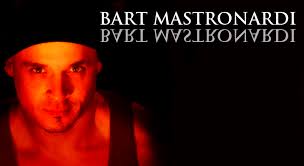 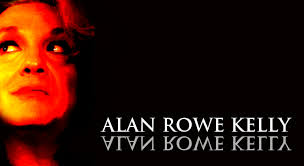 But like Meat Loaf crooned a long time ago, 2 out of 3 ain’t bad. Tales Of Poe overcomes its budgetary limitations and manages to entertain its audience both visually & thematically. There are a few genuinely creepy moments that’ll chill your blood, and some fine performances that elevate the proceedings in a most elegant manner. It isn’t for all tastes, but Tales Of Poe does exactly what it sets out to do – it introduces some of the best of Poe’s work to a brand new audience in a most sincere & heartfelt manner.

I daresay Mr. Poe would be proud of what Mastronardi & Kelly have accomplished here.