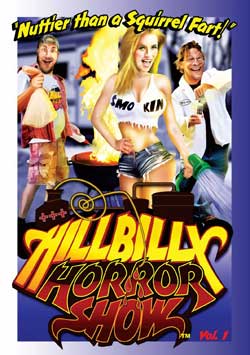 Gosh all mighty, what do ya’ll make of all this? The film we are looking at today is called “Hillbilly Horror Show” Vol1″ by Blu de Golyer and crew under the production of Filthy Fingernails and Suited Four Productions.

Now before I get “too” far into the review, you should know that this is “not” a horror film about hillbillies (it is just the umbrella packaging). This is a good thing, as we have some pretty amazing talents contributing to the whole she-bang without being rooted in red-neck trappings. 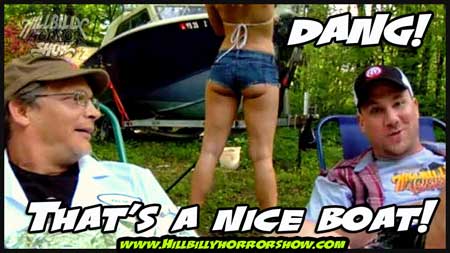 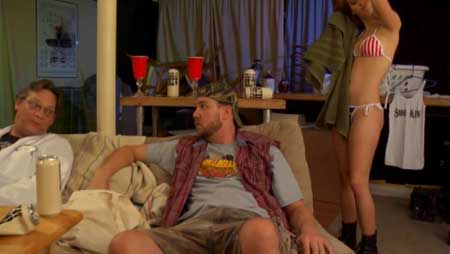 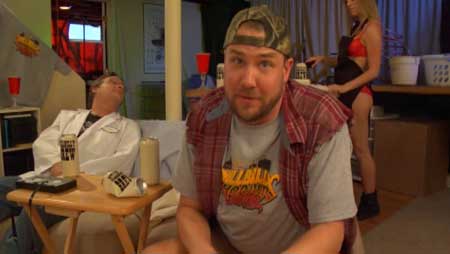 The hillbilly portion wraparound has Bo (Bo Keister), Cephus (Scott Geiter) and their smoking hot cousin Lulu (Rachel Faulkner) acting as our hosts and narrators. Upon receiving a bag of films, the 2 of them partake in the evening’s viewing while Lulu simply just keeps us entertained with lots of eye candy (and reasons to freeze the frames every now and then). The humor here is quick and cheesy served up hillbilly style as we move from film to film. There really wasn’t enough hillbilly to the product to really comment more than the 2 knuckleheads enjoying films while their bathing suit-clad cousin keeps things sexy. Speaking of….Rachel Faulkner …..now there is one girl to watch for….

Anthology-style films as foundation models, have a way of staying pretty active in the horror genre. I’ve seen all shapes and sizes from good to bad to downright stupid and worthless. “Hillbilly Horror Show” is one of the better ones as its strength arises from the sum of its parts.

In actuality it is rather a showcase for upcoming filmmakers of all forms. We do get a variety here that begin with a small short about the implications of the phrase “death do us part” when placed against a rather jealous husband. The piece is titled “Frankly And The Ant”, directed by Billy Hayes. The camera work here is good and presented professionally (as a kudos to the creators). I was actually expecting more of punch line to this piece, but in any case its designed to warm us up to the next bit. 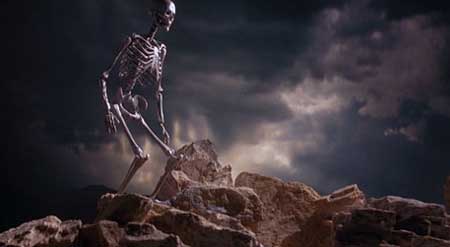 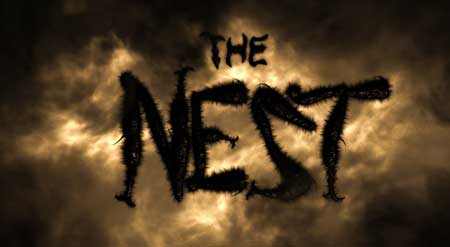 The second piece is a stop motion animation piece called “Doppelganger” by Theo Stefanski’s (obviously inspired by the work of Ray Harryhausen). A skeleton makes his way up a mountain before encountering another of whom he resembles. Rather than a solid storylines line, the attention here is pure raw animation work. A stop motion effort should be given the credit it deserves mainly because the work behind it is painstakingly meticulous (ask Tim Burton about this).

The piece is cool to watch while still being only a small part contribution to the anthology. I was reminded of those 80’s animation compilations they used to lump together when digital art was just breaking ground (though for the record, this appears more stop motion than digital)

“Amused” was closer to a slasher-style short mixed with a touch of goofiness. There is not enough meat here to really comment on it more than it accomplishing its goal of some decent stabbings and sledgehammer work. You could tell where this group of filmmakers efforts are rooted, most likely as an indication of something lengthier and darker down the road. 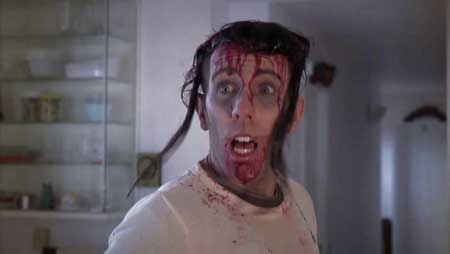 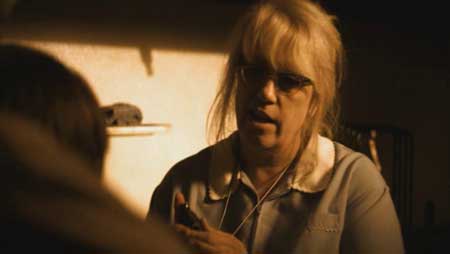 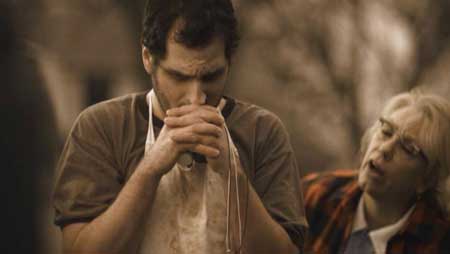 “Hillbilly HorrorShow Vol1” really owes its strongest effort to the final piece called “The Nest”. Now my takeaway here was that this 32 minute piece could have been the film in itself minus the add-ons. It’s extremely well done to the point that it could have easily been lengthened to create a feature. The idea here is a film about troublesome bugs that reside inside the inner walls of a local well. They provide the nearby store owner with an excellent supply of honey while also being quite the lethal weapon.

The bugs which are some advanced form of honey bee, fly in swarms attracted to the scene of another troubled bee. (Or at least I assume that’s what it was). They swarm and devour much like a tidal wave of acid hitting you in the smack in the face.

I thought the CGI was cool and well done despite what anyone might think (aka …snarky reviewers). Again, we have new filmmakers who have accomplished what experienced studios have presented (or tried in many cases). The horse devour scene was surely an early sign of your next FX wizards efforts coming into their own.

My only real complaint is the inclusion of credits after every short. While I do understand the “need” for it, it’s better left as a “end credits” ensemble that announces the hard work of the film makers as we run to grab a beer (or as any hillbilly would do!!). My suggestions on future releases would be to allow for this adjustment.

That’s it in a nutshell…. a horror anthology with some impressive diversity thrown in for good measure. My guess is that Hillbilly HorrorShow will continue with new volumes as things move forward for the team creating a place for up and coming film makers to get their wares into your living rooms. God save the hillbilly!

Check it out….you all come back now!