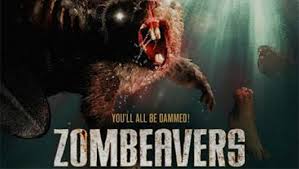 A group of college kids staying at a riverside cabin for a weekend of sex & debauchery are menaced by a swarm of deadly zombie beavers. It all turns gruesome as the beavers close in on the kids, and they are soon fighting for their lives in a desperate attempt to fend off the hoard of beavers that attack them in and around their cabin. 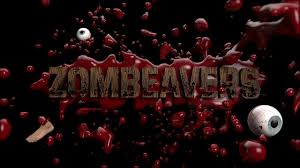 Stop me if you’ve heard this setup before: A group of college kids go to a remote cabin in the woods for some fun & frolic, only to run into some type of supernatural evil, serial killer, lunatic or space alien, they then find themselves in a heated battle for their lives…

I dunno about any of you, but I see a movie fitting this exact description just about every week of the year.

This week’s entry into the “Cabin In The Woods” genre is called Zombeavers. That’s right, I said “Zombeavers”. And what exactly do you think is the menace that’s threatening our not so intrepid kids staying at the cabin this time around? If you guessed “Zombified Beavers“, you’d be absolutely correct! And if you also guessed that a movie about zombified beavers is an extremely stupid idea, you’d also be correct.

But I’ll be good goddamned if I didn’t have a blast watching this completely idiotic, stupid little movie!

Lexi Atkins plays Jenn, a young lady looking for a little respite away from her college studies with a couple of her friends. She recently discovered that her boyfriend has cheated on her, and decides to take a weekend away from any male companionship to clear her mind & reevaluate her future. Her two friends, Mary (Rachel Melvin) & Zoe (Cortney Palm) are pretty much what you’d expect from this kind of movie – young, dumb & sexually adventurous – but they’re all extremely likable. But after a few hours alone in their secluded cabin, their boyfriends end up paying them a visit. So while Mary & Zoe immediately go off to have sex with their respective beaus, Buck (Peter Gilroy) & Tommy (Jake Weary), Lexi harbors a great deal of anger towards her former beau, Sam (Hutch Dano). Unbeknownst to any of them, a couple of dimwit truck drivers who are hauling medical waste manage to accidentally hit a deer, and the resulting jolt to their truck dislodges one of the barrels off of the back of their truck, smack into a nearby river. The barrel wends its way down the lazy river, smack dab into a beaver dam and as soon as it hits the dam -it springs a leak. And what a leak it is! A stream of green goo covers the poor little beavers who are happily doing whatever it is beavers do, and the resulting green shower turns them into undead zombie beavers with a taste for human flesh, actually any kind of flesh. And slowly, our not so intrepid college students find themselves in the fight of their lives against a horde of angry, hungry and unusually smart zombie beavers. 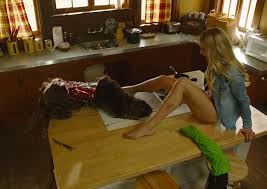 That’s about it, that’s the entirety of the story here. Zombeavers isn’t looking to enthrall its audience with witty repartee or blockbuster special effects, it’s just a goofy little movie that I found wildly funny & entertaining in the most lowbrow fashion. As the zombie beaver menace looms ever larger, and our kids find themselves in ever more dire circumstances – the film gets stupider & stupider. But the smile literally never left my face for its entire (76 minute) running time. Writer/Director Jordan Rubin knows exactly what he’s got here and he doesn’t aspire to do anything more than entertain his audience. I’m almost positive that 50 % of this movie was improvised anyway, but most of that improv is delightfully funny & rude, and there are moments here that made me laugh so hard that I nearly choked on the ginger ale I was quaffing as I watched it. All of the performances here are good as well. Mind you, I’m not saying that anyone in this cast can expect to hear their names brought up come Oscar time, but everyone in the cast fits their roles to a tee. It’s blatantly obvious that everyone involved knows they aren’t trying to re-invent the wheel, and all of them seem to be having the best of times filming this silly, nonsensical romp. 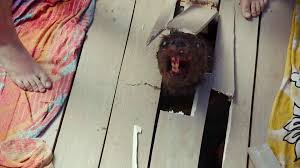 Amazingly enough, Zombeavers does the unexpected in its portrayal of the titular characters. Instead of the expected CGI effects, all of the beavers are realized through good old fashioned puppetry – good old fashioned CHEAP puppetry that is. But that really isn’t a hindrance in this case, as I believe creating the beavers through the use of CGI would’ve made them look too glossy and unbelievable. To bolster my point, there are a few CGI effects tossed in here and they look terribly hackneyed & poorly rendered, but that might’ve been on purpose. As the film progresses, there are tons of dumb beaver references tossed at the wall, and while they don’t all hit their target – most of them do. There are also moments where the kids realize that the beavers are a lot smarter than they are. For example, once the beavers launch an all out assault on the cabin, the kids start to use wooden planks to block off the windows, until they realize (way too late) that beavers eat wood. There’s also a nifty little “Circumcision by Beaver” bit that’s extremely gory and funny, actually the film isn’t quite as gory as I imagined it would be, but it delivers enough in the gore department anyway. By the way, once someone is bit by one of the beavers, they eventually turn into a Zombeaver as well – buck teeth, large tail and all. The makeup EFX are about as silly as anything you’ve ever seen before, but hella fun regardless. 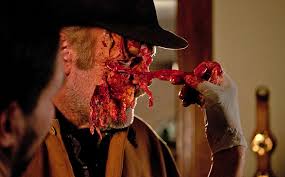 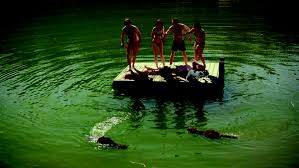 There will be those of you (Most of you actually), who are gonna see this flick and cry out “This is SO STUPID! What was The Black Saint thinking?“, and you would be right. But remember, I just happen to love this kinda stuff. I thought Zombeavers was terrifically entertaining, despite its myriad shortcomings. You’ll need to definitely switch your brains off before sitting down to watch it, but is that such a crime? Does everything you see need to be as highbrow as Laurence Of Arabia or The Godfather? Trust me when I say that if you go into Zombeavers with a few beers (or ginger ale’s), some tasty munchies & a couple of friends – you will have an astoundingly good time.

And that’s all it wants you to do, so have at it! And don’t forget to stay through the end credits (featuring a funny Zombeavers lounge song). There’s a hint to a possible sequel waiting for you which can’t be called Zombeavers 2, but doesn’t really need too much of a title change.

Zombeavers – 4 out of 5 shrouds (Seriously!) 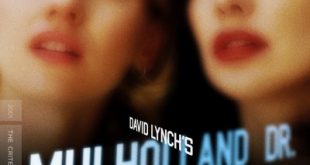