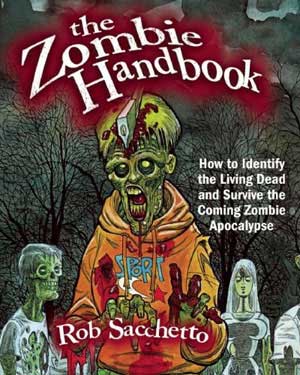 It only takse but a quick glance to know this is a killer looking little read. Littered with top notch zombie illustrations, the author and artist Rob Sacchetto clearly knows his stuff. In fact memories of Evil Dead and book of Necronomicon were the first thing that popped into my head. If the type were alchemic writings and markings, you’d have yourself a sweet little movie prop.

But getting to the main issue at hand, this book is just alot of fun and that’s not to take away from the fact that if you were encountering zombie infestation you would be better equipped with this in hand. You thought you knew it all? Guess again, I’m sure readers will take a few new things with them about the sanctuary of zombie-dom.

Colorful art pieces that pop off the page, pages with blood drippings through out and a nice sepia toned paper look makes up the brunt of this handbook. Quickly back tracking into a bit about Rob’s history, Rob runs the business called “zombie protraits.com” which if you’ve seen before know that they specialize into taking photos sent in and turning folks into the living dead. A skill much heralded by genre lovers who just desire to see what they look like as a zombie.

Now back to the book. We get all kinds of zombie stuff. What are zombies, where are they, types of zombies, stuff they like to eat and even proper sex with zombies. Hey you never know right? What’s the saying …”.when there no more room in hell the dead will walk the earth”. Well it’s better not to procrastinate and get on to getting on. The book mixes advice with comedy which really couldn’t be summed up any other way. Such topics as “zombies vs super models” is worth the price of admission. Pale skin, emancipated bodies, horrendous makeup …it sounds like a super model. And then you get the point for point comparison chart so you know how to differentiate the 2.

How bout the Zombie food pyramid? Starting with the zombie essential “brains” and working its way down into he cuts of meat on humans. Just in case you need to know, you got the manual to lay it all you for you. I think its fair to say that author Rob Sacchetto has covered every zombie base I can think of.

I particularly enjoyed the “types” zombies which range from Demonic, government, alien controlled, voodoo to biblical zombies. Which by the way as we all know from he variety of films are all forms of zombies that have appeared in one form or another. Distinguishing features and traits help to set the range of differentiation. Zombie religion, leisure and fitness is quite funny and a nice comic relief incorporated with the content. Though my all time favorite little section had to be “Homemade” weapons used to kill zombies. Nails though a baseball bat, lawnmower with a shoulder strap, and broken bottle fitted at the end of a pool cube are a few of the clever devices. Dig in and enjoy the wealth of helpful tidbits.

This is especially useful on the nights when your saying to yourself….now what ways can I kill a zombie?. Sounds waves, crushing, head trauma, microwave …and then some. Of course every piece is properly illustrate which makes this a highly visual piece for readers. Upon finish , I was left with the notion that Rob had really studied his zombie films. This is backed up by all the common situations, kills and outcomes that the zombie film history has developed. That history is the basis of the information provided in this book. Romero, Fulci, Snyder, Savini, Raimi….all those noted stereo types are here to be examined. Forget about the voodoo zombies, or the demonic zombies?…Heck no… they are here too

A crazy, beautifully done gory illustrated book that is a “new” must for horror a nd fantasy lovers.