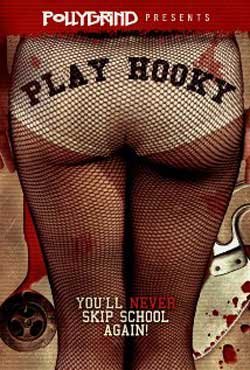 Seniors play hooky from high school and get trapped in an abandoned Psychiatric Facility famous for hauntings, witchcraft and demonic possession.

Stop me if you’ve heard this one.

A group of mildly attractive teens ditches class to drink some booze and smoke a bit of the wacky weed. Their party pad plans fall through, and the remaining option for a locale is the abandoned mental institution on the outskirts of town. The festivities turn sour as they are stalked and murdered one-by-one. Oh, and did I mention? One of them has a camera on hand to film the entire ordeal. Yes friends, it’s one of those.

We’ve all heard this one before, over and over again. Whether found footage or another unimaginative slasher entry, this basic template has grown so outmoded that any scornful slurs against it have likely already been uttered at some point throughout the years. In other words, bitching about these movies has grown as dull as their plotlines. Given that the possibility of inspiration is but a pipe dream, all one can pray for is a parade of cheap nudity and carnage. 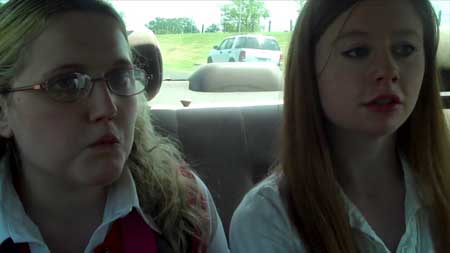 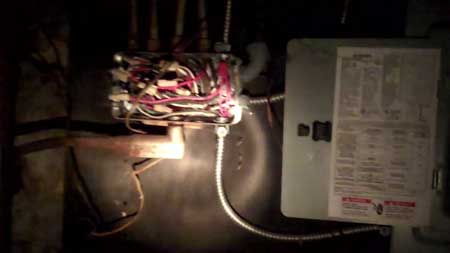 The latest for consideration offers very little in the way of either flesh or blood, and any chance of creativity was abandoned at the synopsis. However, “Play Hooky” (for those unfamiliar with the phrase, it refers to skipping school) nearly works in spite of itself, relying on a likeable cast of unknowns and a scrappy gimmick-within-the-gimmick to drive its pedestrian narrative. Neither aspect absolves from the brand of forgettable claptrap, but the fact that it could impress on any level was enough to pleasantly surprise yours truly.

The clever part comes in the form of presentation, as we meet Brad (J. Wright Chester) in the midst of testing out the camera he has hidden inside of a hat he plans to wear for the excursion. Allowing the action to unfold before only one electronic eye operating as a single point-of-view might initially sound like a ploy to make a tedious film style even more so, but it works marvelously. Gone are cutesy asides to the fourth wall, as but one other character is aware of the filming. This technique also allows for some semblance of framing in the mandatory running and shouting scenes, and it’s downright feasible to discern most of what the hell is going on. In fact, “Hooky” could have rolled with the more novel approach of staging the entirety in one unbroken take, à la “Silent House” or “Pig.” That would have required a bit more focus and moxie than the crew was willing to expend, I suspect. 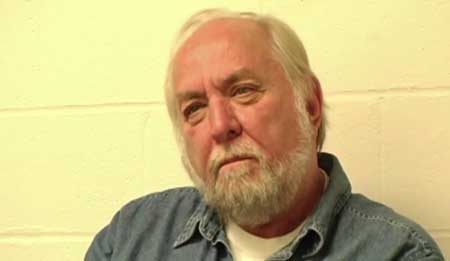 Technical praise aside, this would be unwatchable were it not for the five leads. Brad is picked up by older cousin Lance (co-writer Vincent Kulish), who is quick to disclose all of his collected intelligence on the young ladies they’ll be wasting away the day with. In short, he dishes on the chicks. The female counterparts consist of tough girl Rosie (Kim Kleemichin), who we know is a hard ass because she attends vocational school. Along for the dalliance from a Christian academy are Meg and Claire (Becky Byers, Theresa Davis), a package deal much to the chagrin of the others. Prior reports from Lance deem Claire a chore of an individual.

That she is. We all knew a person like Claire in the days of yore (and may still), relentlessly complaining and/or in need of something. Davis, as unseasoned as the rest of the principals, displays a sad pathos as the party-pooper. The performances carry an uneventful first half, as they cruise around scoping out possible settings for their soiree. One also has to thank Kulish and fellow conspirators Jason Chester and director Frank S. Petrilli for a script that doesn’t cater to dunces or attempt an obnoxious amount of trendy vernacular in the dialogue, immediately dating itself. As is the case with most micro-budget found footage attempts, however, some of the banter could be the result of organic improvisation. 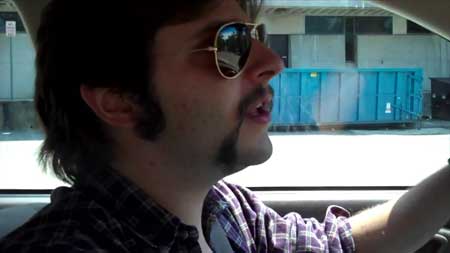 Our leads arrive at the aforementioned asylum and promptly ignore the warnings of a guard (Why is this empty building staffed with a security department?) to keep away, bringing the accolades to an abrupt halt. The “drugs and decadence” montage, a staple that could stand to be put out to pasture, is mercifully succinct. Claire disappears during a bathroom excursion, leaving only a thick trail of blood on the floor for the others to discover. It isn’t long before everyone is fleeing for their lives, pursued by a killer whose identity is no secret considering he wasn’t introduced until twenty minutes before the credits roll.

Portrayed with a sing-song child’s patois that hasn’t frightened since the original “The Evil Dead,” the character of Buddy (Tom Petrone) manages to drag an insipid final third even further down into the crapper. Virtually bloodless with a few instances of struggle so awkwardly choreographed that one must wonder why they even bothered, as any possible tension is extinguished by the amateur little theatre interpretation of a villain who doesn’t even work on paper. Encroaching upon the credits, it’s tough to shake the sensation that “Hooky” is merely biding time right alongside the viewer until this baloney hits the feature-length mark. 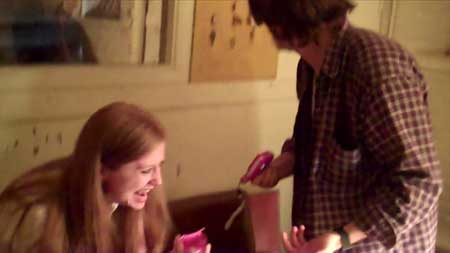 Or, perhaps it’s all just a small step to greater ambitions, as the sequel “Play Hooky: Innocence Lost” will be rolling onto the scene before we know it. I’m intrigued, as the summary reads more like plot and less like empty setup.  The existence of an actual story is already a massive improvement.

This is precisely why “Play Hooky” fails. Regardless of how engaging, no one will follow antagonists without anywhere to go unless it’s in a Jim Jarmusch movie. Hopefully, Petrilli and company have learned that lesson for the next time around.