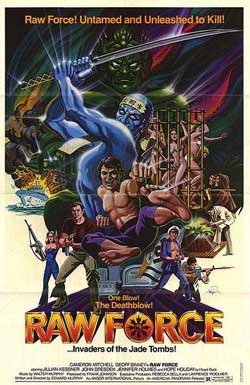 A group of people are stranded on an island full of precious jade. But danger lurks in the form of all kinds of crazy crap that you have to see to believe.

If you were looking for me back in the early 80’s, then you’d probably find me in Times Square. Throughout the 70’s and well into the 80’s, Times Square was the place to go to if you wanted to spend the afternoon watching some great exploitation flicks, and my friends and I drank it all in. I could tell you some amazing stories about the adventures we had navigating the myriad theaters, burger joints & arcades that littered the strip back then, they were definitely some of the best times of my life. I’m reminiscing about those halcyon days because on one of those special afternoons, we sat down to watch Raw Force – and I remember this movie like I just saw it yesterday. Trust me when I say that you’ve literally never seen anything like this before. 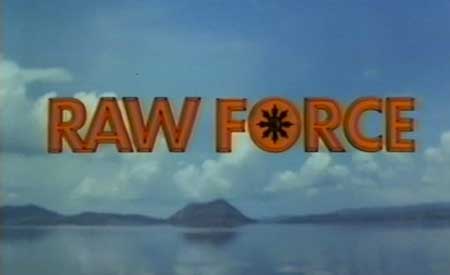 Written/Directed by Edward Murphy, Raw Force tells the story of a group of martial arts students who are vacationing on a ship that happens to drift a little too close to Warrior Island. And since Warrior Island is chock a block full of precious Jade (That’s being mined by a rag tag group of group of vicious traders), the proximity of the ship to the island might be a problem. So they get in a dinghy, and motor over to the ship, and after some chop socky shenanigans (NEVER attack a ship full of martial arts students), the remaining traders escape. But the ship catches fire in the melee, and the surviving students escape in a small boat – eventually coming ashore on….Warrior Island. By the way, did I mention that the captain of the ship is played by Cameron Mitchell?

Once they establish where they are, they’re met by a group of cannibal monks (Led by Vic Diaz), who are working in cahoots with the traders. The monks allow them to mine the island for jade, and the traders supply the monks with a steady stream of nude women for them to eat. Oh…on occasion, the monks sacrifice a girl to the undead Kung Fu warriors who are buried in the island’s graveyard. These undead warriors protect the monks from those who would harm them and let’s be fair, even the undead need a little nookie now & then. The traders are led by a Asian dude who looks a lot like Adolf Hitler, and to make matters worse – the water around the island is polluted with flesh eating Piranhas. So our little group is in a lot of trouble. 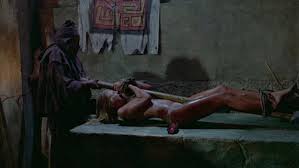 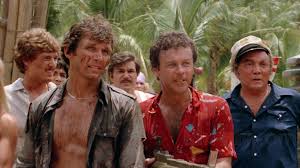 Speaking of our group (The Raw Force of the title), it consists of Mike (Geoffrey Binney), Cookie (Jillian Kessner), John (John Dresden) & Go Chin (Rey King), and although they don’t consider themselves to be a group at first, their collective fighting skills bring them together in the end. Luckily for them, every single enemy they have to fight doesn’t seem to know how to do much more than stand in place and let our heroes beat them up. They occasionally take a swipe at our heroes, but they generally just stand there waiting for their cue to fall to the ground. Even the supposed great zombie warriors come up kind of short in that regard. 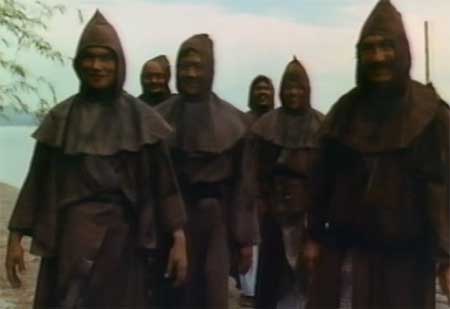 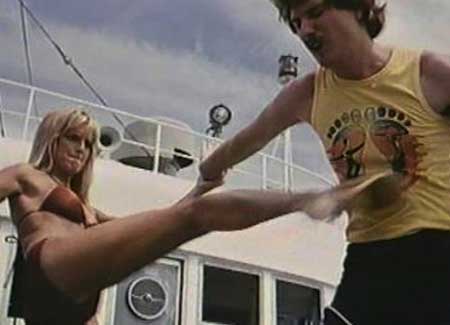 But none of these plot details really matter, the beauty of Raw Force is that it doesn’t care what you think about it – it’s just gonna do its own thing with nary a care as to if any of it makes a whit of sense. I feel just like Stefon of SNL fame when describing it but what other movie are you gonna see that features Cameron Mitchell, terrible kung fu moves, enough gratuitous nudity for a Skinemax flick, chunks of foam painted green to look like jade, a Bruce Lee clone, zombie warriors, Cameron Mitchell, traders that look like rejects from a Village People audition, explosions, Asian Hitler, flames superimposed over a scene to suggest a fire, Piranhas (courtesy of stock footage from Piranha (1978), Kung Fu bikini battles, a Fred Willard look alike, a fight that rivals the fight from They Live (1988), cannibal monks who laugh & dance maniacally as they eat you AND Cameron Mitchell? You’re not gonna find a movie that combines all of those disparate elements into anything resembling a coherent film. Hell, this isn’t a coherent film! But it’s so much mindless fun that none of its incoherence even matters. Raw Force is a smelly wheel of cinematic cheese of the highest order and that’s one hell of a compliment coming from me. I loved every ridiculously overwrought moment of this flick and one of my life’s greatest disappointments is that the promised sequel (That’s right, a sequel is promised at the end of all of this madness), was never produced. 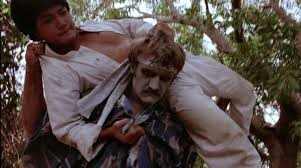 To sum it all up, you don’t go see a flick like Raw Force looking for great acting – you aren’t gonna find any of that nonsense here. You’re not gonna find cool special effects, make up or a witty script either. But there’s a ton of mindless fun waiting for you if you’re willing to take the plunge and pay a visit to Warrior Island. If you know me at all, then you know that my favorite all time film is The Manitou (1978), and that hasn’t changed. But I’ll be good god-damned if Raw Force isn’t the greatest film ever made.

And I most sincerely mean that.