A naked teenage boy covered in blood appears at a remote sheriff’s station one year after the brutal unsolved murder of a local girl. Now Sheriff Jack Shepherd, guilt ridden over the girl’s murder, must confront his own demons as he desperately searches for the boy’s true identity and possible victims. Little does Jack realize that he has started down a path that will bring him face to face with an unthinkable horror. Before sunrise the living will pay for the pain the dead have suffered.

The town of Shallow Valley may be on the brink of shutting down, but not without a few demons from its past making sure “No One leaves”.

“Shallow Ground” is a film I had the pleasure of checking out in 2004 when it barely made its way into viewer hands due to a pretty horrible DVD cover job. Since then I have come across it as an add-on to a few multi-movie packs. However I loved when I first checked out and equally love it now finally getting around to a proper review. Directed by Sheldon Wilson, the movie was reason alone for me to seek out other works by this director. 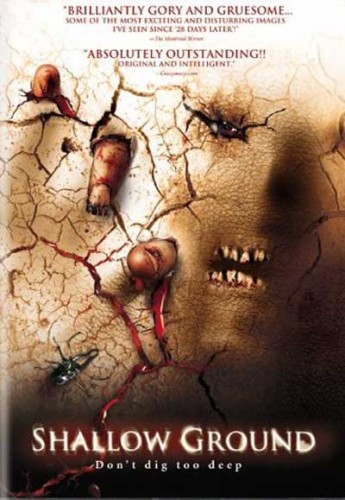 “Shallow Ground” starts on a very striking but shocking note. A teen boy walks naked thru the first covered in blood from head to toe. As the local sheriff Jack Sheppard (Timothy V. Murphy) and his 2 deputies Stuart Dempsey (Stan Kirsch) and Laura Russell (Lindsey Stoddart) finish packing up what’s left of their soon to be abandoned law office, they are alerted to a strange silent blood-soaked boy who appears without reason.

The town is explained as packing up due to a recent Dam construction that leaves little in the way of reason for sticking around (with the exception of a few locals who refuse to leave). Jack Sheppard anxious to move on, still suffers the mental anguish of a local girl, Amy Underhill, who he found chained in the woods. Jack failed to save her when he went off to look for the one responsible. In fact the town has been subject to several missing persons, all of who have gone missing without explanation.

The boy’s presence quickly transitions the movie over into extremely creepy and mysterious. The boy possesses a supernatural ability to leak blood from his pores and move on its own affecting anyone it touches (giving them a vision of the area’s dark past). The FX work here is quite brilliant and visually intense in the way it pours out of the boy leaking from his eyes and ears. Regardless, it sets a eerie tone to the whole premise which indeed has a purpose in store for those it comes into contact with. 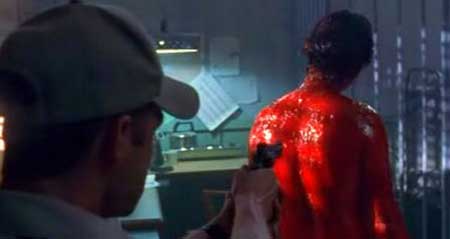 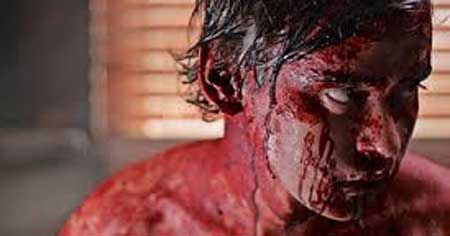 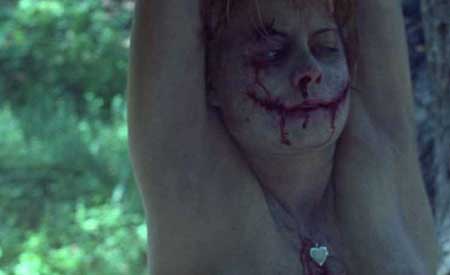 My initial response to all of this was, a very intrigued engrossing experience hooking me from first scene to last. The story was unique, well acted, and filmed with an eye that surpasses many of the low budget thriller attempts that you’d would expect this movie to accompany.

If you like naked women hanging from chains, it’s got a bit of that too. Though really I thought this to be a great story and a unique way of creating premise with the damaged souls from beyond taking back control over a soon-to-be-abandoned forest town.

The essence of this film stays true to its form by constantly keeping a sense of “uncomfortable unknowns” which is played out in great performance by the fully nude Rocky Marquette who is simply known as “boy” in the movie. Marquette holds his own despite his vunerable situation and task of wearing a blood suit thru most of the film.

“Shallow Ground” is one of those films that sports a crappy DVD cover that most likely hurt it more than ever helping it. It was also slammed pretty hard in reviews as “being a bit of mess”. This is a case of a movie not getting the credit it deserves by way of some bad reviews and terrible marketing. It’s far from being a product that suffers from low budget financing.  With that in mind, it managed to impress me more than my finding reasons to hate it. If I peaked your interest at all, then at least give it shot…you may love it as much as I did. 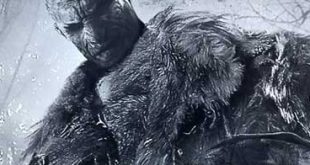