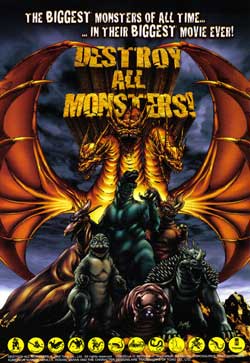 This film is the ninth entry in the Godzilla films. It was going to be one of the last but they realized there was more Godzilla had to offer the world via film. What makes this film special is that it’s not very often you will see all eleven monsters together whether they are fighting to take back the world due to some mind tricks from the aliens or enjoying living in a stable environment. Some of the monsters only really have cameo parts in the movie which will disappoint the fans but it’s really a testament to the skills of the production company that can make a movie come together so well for its era.

In Destroy All Monsters, the year is 1999 and all monsters of mass destruction have been moved to ‘Monster land’ to be monitored by scientists. The monsters are Anguirus, Rodan, Godzilla, Mothra, Spiega, Baragon, Gorosaurus, Manda, Varan and King Ghidorah and initially we see them chilling out on the island which has plenty of food and space to walk around or fly. They are not behaving like atypical monsters that you’d ‘normally’ picture. You don’t find out how all the monsters got to the island but somehow they did! I do find it strange that the monsters are all getting along when in other monster movies they want to kill each other straight away but again, this is a movie!

You’ll watch the lucid monsters through monitors, eating food and walking or flying around so the scientists can watch over them until all communication on Monster land cease. “What on earth can be wrong here” the scientists exclaim in the dubbed language of English from the actual Japanese original version, so its like watching the TV show ‘Monkey’, and it’ll make you laugh out loud as well. This doesn’t make the movie disruptive to me, I actually find myself staring at the mouths and wondering what the actor’s actually sound like. We get the beautiful radio version voices.

The scientists see a UFO in the sky and put the pieces together of why the monsters are behaving badly. These aliens have taken relish in the fact that the monsters are cohabitual, so the aliens hide themselves at Mount Fuji so there is no attention drawn to their presence and play mind tricks so all the monsters can escape and go on a war path of destroying the worlds icon’s (not too sure how most of these land dwelling monsters can cross water to various countries but that’s the movies for you!). These Aliens from Kilaaks have taken over the monsters minds as well as some of the human minds and they want the humans to surrender to them so they can take over the world.

The United Nations Science Committee recently constructed a scientific base on the moon and there are space flights that happen daily. You will discover the Kilaaks broadcast their signals from under the moons surface so the humans must destroy this and return to earth to gain peace again.

Watch cities destroyed, gun fights, spaceman suicide, space chicks, explosions and mass destruction. Observe the monsters at the base of Mt Fuji put on a noisy battle to kill super villain King Ghidorah until we witness the ending battle (watch how many times Ghidorah’s head is stomped until he finally dies) and then the monsters (and humans) life returns to ‘normal’. 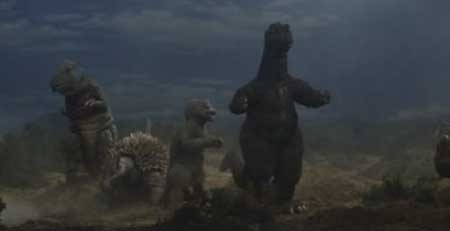 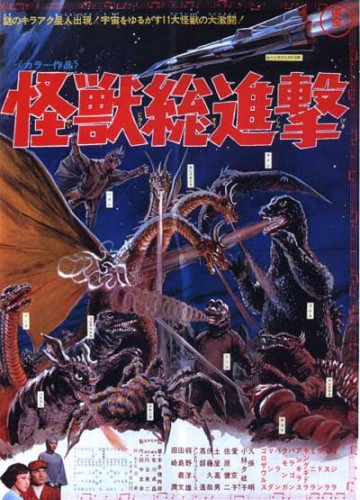 Witness Godzilla looking pretty pleased with himself at the end; bet you have never seen that before, it’s rather cute I must say. The miniature settings are really great, especially for its time, well crafted, well edited and rather well directed. The movie seems to be ahead of its time and its action packed and animated extremely well. I have no doubt some people will find the dubbed English language terrible but if you overlook this, I feel you will enjoy the movie, which would be suited for all ages.