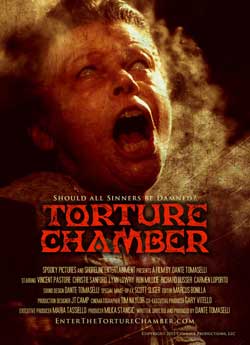 A shocking family portrait. A boy oozing blood and saliva, bound by ropes and handcuffs, imprisoned in an animal cage. A deeply religious mother who believes her son is controlled by the devil. A Catholic priest devoted to saving his family, who tries to cure his deranged younger brother – but 13-year-old Jimmy Morgan is possessed by an evil too powerful to be exorcised by any religion.

Creator, director Dante Tomaselli has always had a knack for bringing his unique version of horror to the screen. Its a style that to hard to place but that always seems to hold enough dark sensibility that can easily get under your skin. Torture Chamber his latest creation begins with a demonic bang that introduces 13 year old Jimmy (Carmen LoPorto), a burn victim mental patient who has been infected by a demon giving him a small range of unique powers.

Jimmy, who we experience in flashbacks as to what past events have led up to his current state, is the film’s brooding, cold leader who controls a small group of burn victims and detention center kids willing to do his bidding. Jimmy an evil child to begin with appears to be perfectly comfortable with carrying the burden of a demon inside him (which is explained briefly as the demon of Balbereth (demon of blasphemy) (who he and others now worship) over a phone call with Dr. Fiore). He has an agenda. That agenda falls upon those who he felt wronged in and making them pay.

One of the concerns I had while watching this film is that the lead character Jimmy was hard to read between where the residing demon started and the brat of kid ended. Jimmy was consistently cruel for the sake of cruelty which combined with his non speaking portions of the film made for a character that was often silent and displaced. The movie attempts at making cases for compassion however they don’t seem to measure up to “enough” reasons for him being so jaded. He has issues with his priest brother Mark, his mother and his grouchy father all of which don’t deserve the extreme situations of torture they are made to endure. He also had some issues with his art teacher (Lynn Lowry), but as to “what and why” was still a mystery to me.

The castle setting, which was used as one of the movies main locations, works beautifully as the film’s “lair of doom” for Jimmy’s group of mindless brats. Conveniently, the castle comes complete with a small amount of medieval torture devices which are used on old friends and acquaintances by Jimmy and group for the sake of inflicting intense harm.

“Torture Chamber” has pros and cons laced thou-out. The pros are that Director Dante Tomaselli is effective with giving us the creeps almost effortless at times. It’s a subtle use of instances that combine camera work, placement of actors and the feeling that something is lurking just out of sight.

This works extremely well in the first half of the film. The second tends to give us some of the back story which leads to a confusing routine of luring old friends to this abandoned castle for group beatings and torture sessions. What worked against this film is its fragmented premise that just doesn’t hold up as a cohesive piece. The motives are a little gray with Jimmy’s state being just a bit of mix between unnerving and confusing. Again its not entirely clear if his actions are driven by being possessed , a brat or a just a result of mental issues from his stay at the detention home.

The movie appears to me to be based around Jimmy’s acquaintances and the exercise of killing each of them off thru torture, murder or some form of in between. Jimmy’s powers while effective at times, also confuses the movie as to what extent they work or why they might be limited to start with. He is able to make a floor become hot but doesn’t start people on fire? All these notions seem mostly unanswered which were further confused by dream sequences and flashback cuts.

In all there is a fair amount of horror to this production. The movie as a whole wont hold up to consumer needs due to what feels like a sketchy outlined script. If potential viewers are looking for a advance takeaway it is that Dante Tomaselli does shine in the scare arena at limited intervals. Maybe even enough to make the whole visit worth your time,

Regardless I’m still a Tomaselli fan and believe he has yet to deliver his best work.