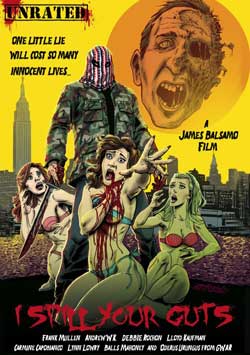 Two friends Dennis and Joe join the military together. While on a routine mission, the two are quickly surrounded by enemy fire. When Joe stands up in the line of fire to run, Dennis pushes him out of the way and takes a bullet in the throat. Dennis wakes up in hospital to find Joe rewarded as a hero. Joe told a lie and took all the glory, and Dennis was left as a mute from the accident. Dennis can’t talk, but actions speak louder then words. The two return home to N.Y. and now the war rages in the streets. Dennis wants revenge on Joe, so he will kill everyone close to him. One little lie will cost so many innocent lives

It’s difficult to know where to begin with I Spill Your Guts, although with a name directly inspired by the controversial horror flick, I Spit On Your Grave, it was obviously going to be an exploitation film. However, my problem wasn’t so much that, as the rather chaotic, senselessness that most of the scenes in this movie consisted of. Fundamentally, this ‘horror’ film isn’t scary, which, for me, means that it has failed its purpose. It was quite vile and disgusting in many places (a particular moment which stands out in my mind is when a woman is giving a man oral sex until her head is sliced off her body, yet the man fails to notice, rocking the lifeless head back and forth for a while), but the violence was so outrageous that it was just comical. Perhaps this was the intention though. I hope it was. 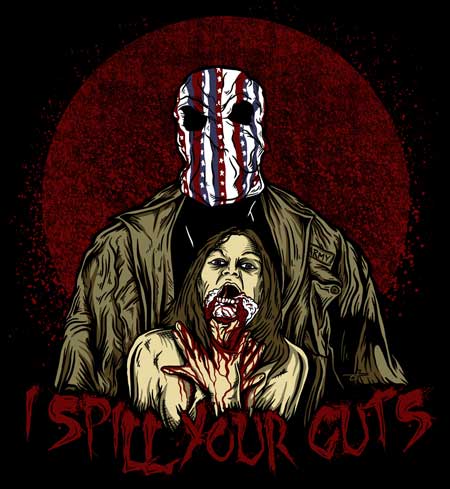 I Spill Your Guts tells the story of two friends, Dennis and Joe, who join the army together. Tragically, an incident occurs in which Dennis gets shot in the neck and so he is then sent to hospital, lying on his deathbed. Deciding to turn his back on the friendship, Joe takes all of the credit for Dennis’s bravery and gets sent back home to New York, but Dennis isn’t happy and somehow finds the strength to go after him in a murderous rampage. At its very roots, this is a film about a friendship torn apart by unfortunate circumstances, but of course with a very heavy influence on the slasher and revenge aspect of the story. The plot itself is a gripping one, and on paper it sounds like an exciting watch. Sadly, I Spill Your Guts didn’t fulfil this potential because of its poor execution. The predictability of it ruins any depth that could have been present. Although, it does hark back to the eighties, with the ‘video nasties’ which were done on the cheap, yet somehow managed to gain a cult following. It is clear that the director is a lover of those old classic movies and so he has a very precise idea of his target audience.

First of all, the introduction is way too long – it took about nine minutes before the film properly began. The beginning is basically giving the viewers an English lesson about what certain words mean, which is helpful and all, but I’d much rather proceed with the film to be honest. Perhaps a quick definition of one word would have been effective and had an impact, but by the sixth word it started to get a little tiresome. We know what these words mean! We are all intelligent adults here. 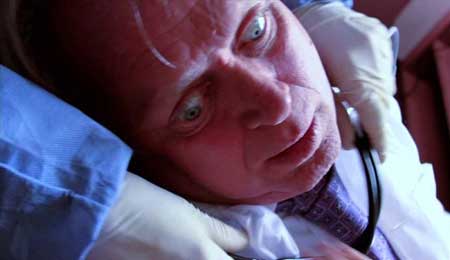 Additionally, every other scene featured a woman taking her clothes off, which did start to exasperate me a little. Nudity I have no problem with, but when it’s just completely gratuitous and serves no purpose to the story, then I ask why? We all know what boobs look like and don’t really need reminding every few moments. Is exploitation purely what horror’s about? I don’t think so, personally. There were several scenes along the way which seemed too random and unimportant (in particular there was a prolonged period forcing the viewer to watch someone watching a music video). Yet, there was no character development, or build up of tension or atmosphere – something which should have been essential to any horror movie! 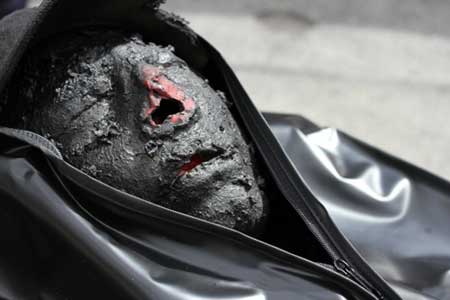 I am actually a fan of metal music and so I thought it was an interesting choice to go with that for the background sounds, as opposed to the standard violin screeching ‘orchestral’ music that horror films usually opt for. Though whilst this was amusing and surprising at first, it quickly began to grate because it didn’t flow smoothly from scene to scene, but was hastily plonked in wherever it would fit. It is almost like the director wanted to squeeze as many bands in as he could, resulting in sometimes playing a song for three seconds before stopping it dead again. Similarly, the actual dialogue was too quiet in comparison with the music – the main focus should always be on the dialogue! I think the director should have concentrated more on the film than being distracted by the music side of things. 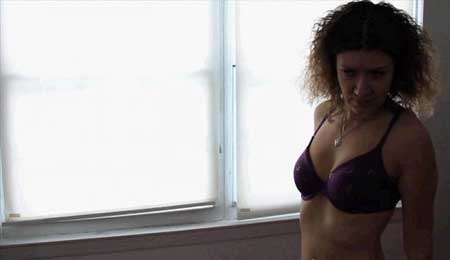 It is clear that director, James Balsamo, has a love for horror, and that shines through in his work. He actually stated that his inspiration for I Spill Your Guts was simply, ‘his love for blood and guts’. There’s a whole ton of cameos featured in this movie, and so those more familiar with classic B-movies and obscure metal bands will probably get some enjoyment out of spotting them. On their Facebook page, even Laurence R. Harvery (from The Human Centipede 2 (Full Sequence)), David Naughton (from An American Werewolf in London) and Andrew W.K. promote this film, showing that James Balsamo obviously has a lot of friends in the business. Another interesting note to add is that there are several different T-shirt designs for the film, as well as a Halloween mask of the ‘American Executioner’ (something which is a huge honour in the horror film industry!). Clearly this movie has a lot of fans out there already!

For anyone looking to tackle this film, I offer you some quick words of warning – things to expect from this movie are exploitation, exploitation and more exploitation. The plot is simple so does not require much effort to get into and there is more than its fair share of kills, so essentially this is a true horror, through and through. It won’t be to everyone’s tastes, but then slasher flicks rarely are. 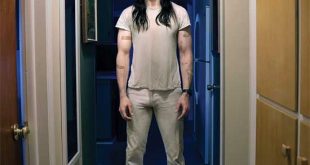